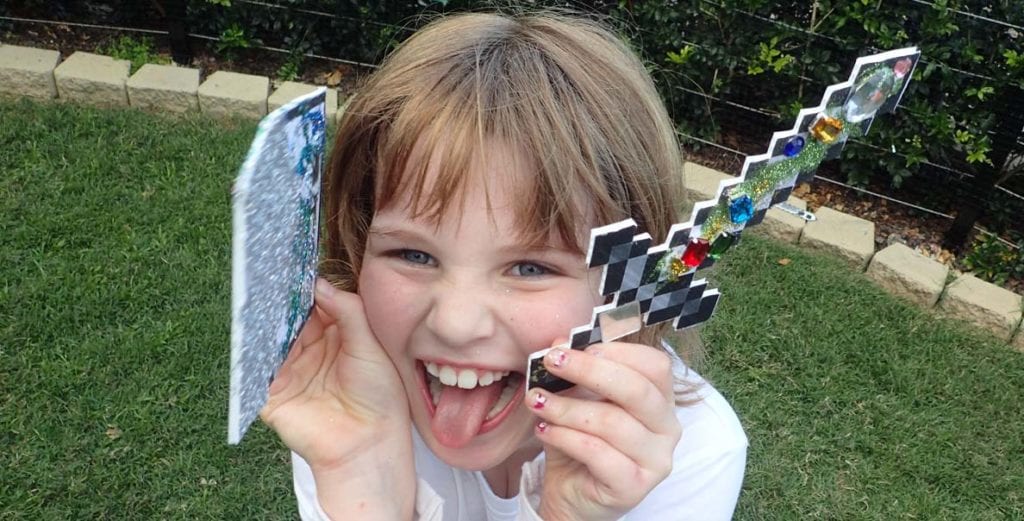 So, I set out to create the party of the year on budget – and thought I’d share my affordable Minecraft birthday party ideas here.

I might not be a great cook but I do love creative party game ideas.  My son is Minecraft mad and I’ve been lucky (cough) enough to sit through a million Minecraft games and countless YouTube videos.  Knowing your subject matter helps.  Lordy do I know my subject matter….  so, so well.  My son is a bit obsessed with the Enderworld.  This is a very particular part of Minecraft – beyond the newbie stuff, it’s all about defeating the Enderdragon – never heard of it?  OH, YOU WILL. 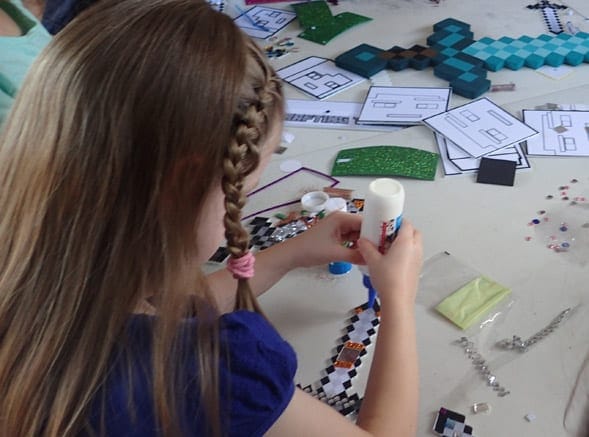 Have you ever seen 30 kids at a birthday party in complete silence? There’s a first for everything. The crafting table was the stand out party game for Mr 7 and for me, it meant that the kids had something “feature” to put in their own party bags. I just added a few TNT and Lava lollies (SO cheap in bulk from a lolly warehouse or wholesaler – like $0.15c per piece boxed). Do this activity first as it gives glue and paint plenty of time to dry before your guests leave. You will need:

Some Minecraft colouring in pages – available free all over the internet. 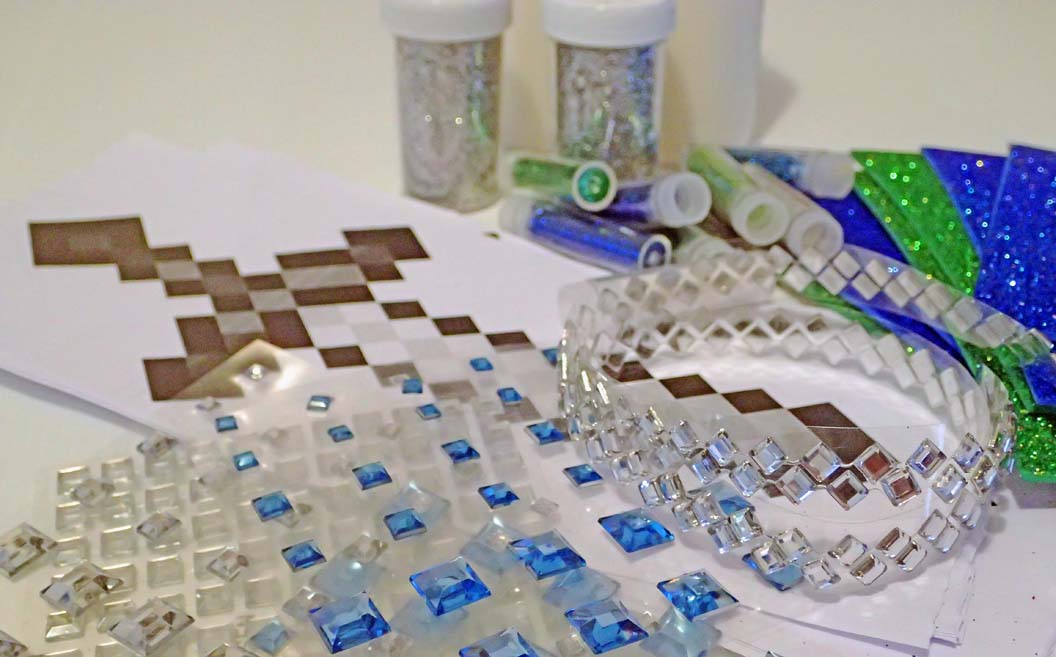 We had two mining games. One for the big 7 year olds and one for the toddlers and littlies. Both were MASSIVE hits and can be done on tiny budgets.

I had planned to create a cloud dough spectacular for the little kid mining game but I happened to be at a dollar store that was clearing kinetic sand for $0.50c so I just grabbed that. Cloud dough however, is non-toxic, easy and cheap to make! Get the ingredients, mix them together until they cling and bam, you’re done! 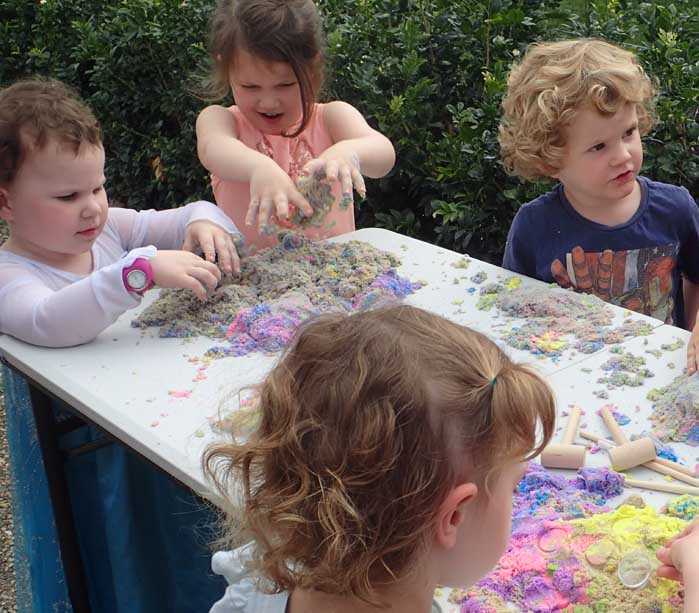 I simply hid little toys inside the sand and the little ones had to dig them out. They were mining for treasure (like faux emerald rings – $3 for 16 at a party shop) and I bought a 50 pack of Minecraft characters and faux Lego pieces for a few dollars to use in this game and for decorations.  Once the mining was all done and dusted, the little sisters and brothers had a play table that kept them occupied for the rest of the party (not to mention some of the mothers – ooooh it’s so squishy). 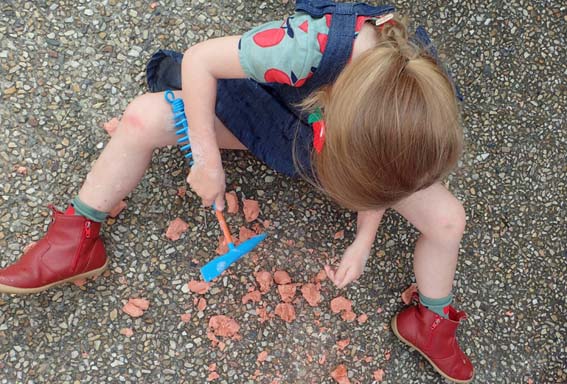 This is a mining game for bigger kids that require they follow instructions and use safety precautions. It is however not as dangerous as it may sound! This one took some work and was probably the most expensive game to set up. It was a MASSIVE hit. You will need: 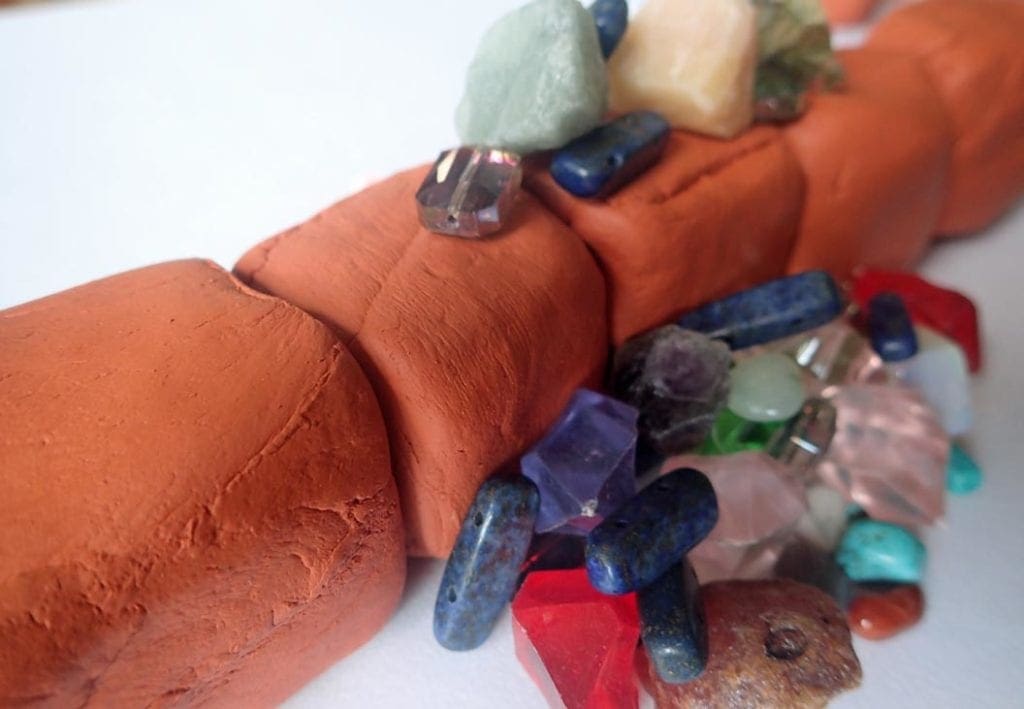 Steps to play the game 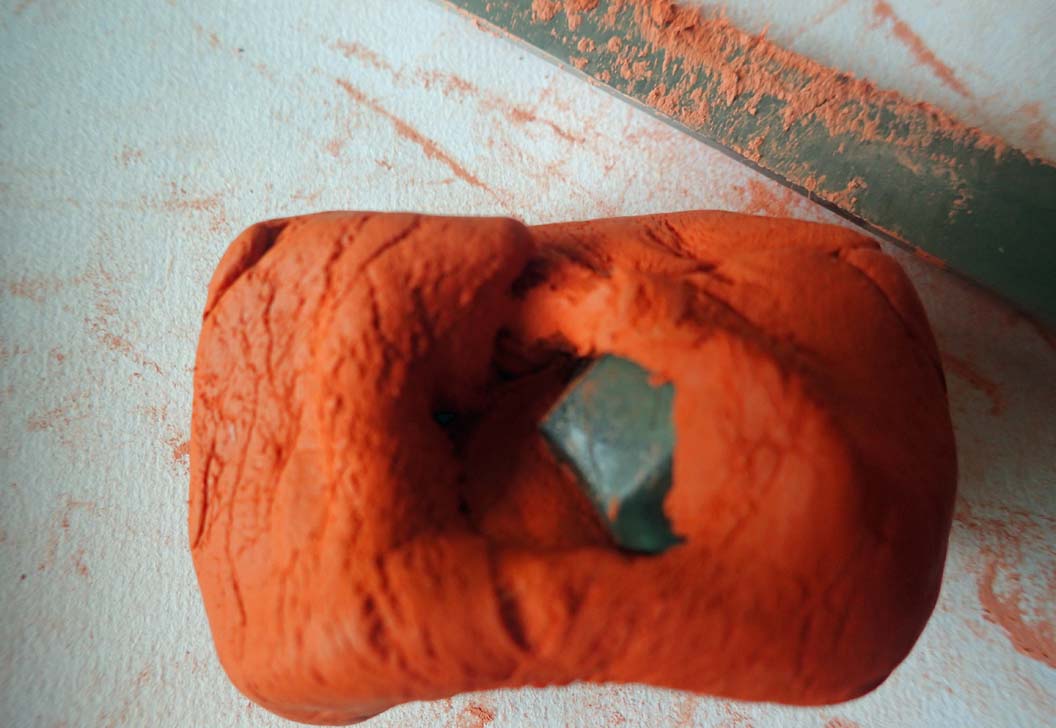 NOTE: The clay will claim to dry hard in 48 hours. This is a big fat lie. Do it at least a week in advance of the party. Note that baking them dry in the oven is a terrible idea for several reasons. Not only will your oven stink, not only do you risk melting plastic in your oven but even the tiniest air bubble in clay makes for a spectacular, oven door shattering explosion. If your clay isn’t “rock hard” don’t worry – it means that it won’t “shatter” on the day, which means zero flying fragments. Ours was still very damp and cracked open instead of shattering. Perfect.

OK so there are a million Minecraft birthday party food ideas on the internet. The beautiful thing is, that for people like me who can’t/won’t cook, they’re all super easy to make! Now, it’s important to note here that there is Vanilla Minecraft and Minecraft Mods. Vanilla Minecraft food is kind of limiting for a mother who won’t cook, but Minecraft Food Mods opens up a world of easy peasy food options. Shout out to DanTDM, the YouTube Minecraft expert for opening my eyes to food mods (and for being kind of cute!)

For the most part, party food is party food and the lollies and cakes and other classic party foods were purchased retail. I am not going to spend my whole life home making gummy bears to save $3 at the supermarket. The stand out wow recipes however were mostly done by my mum, the real cook in our family. Her recipes were AMAZING and very Minecrafty!  I also used little shot glasses to individually package most of the lollies. This is because kids are gross. Like really gross. I didn’t want grotty hands diving into bowls over and over. If it was small enough to need digging through, it got its own individual portion cup.

Note that if you don’t believe in giving kids food colouring, start scrolling; this section isn’t for you! We used the “natural food colouring” options which at times reduced the wow factor of the results.

Mars Bar Slice is basically chocolate crackles 2.0. It can be done in a Thermomix if you’re that way inclined (I had to borrow a blender for this party so no Thermie here)

Turns out the rest of the world makes coal cookies as part of their Christmas festivities. Who knew? There are a million recipes out there. Again, who knew? You can use regular chocolate cookies but Oreos are really dark brown and give a very “black coal” appearance. 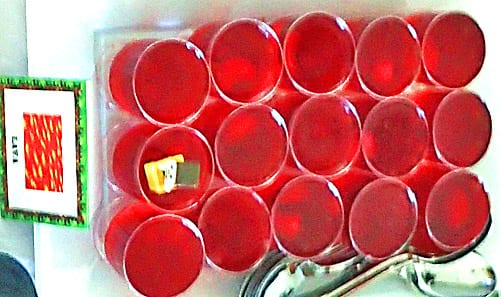 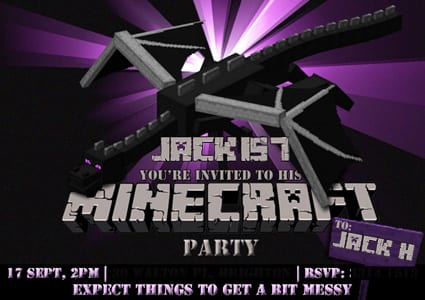 I did splurge on one thing… the cake. You see, I’m not a baker in any sense of the word, and I thought it best to pay a pro to make the show stopper cake! I have a little thing for very cool party cakes! I used Caked in Fondant  to make this stunner cake.
For mothers with any baking and decorating talent at all though, Minecraft is all about the square blocks. So making an awesome cake at home doesn’t need much talent. Pinterest is choc-a-block (literally) with Minecraft cake ideas. Sadly, anything I attempted to make would inevitably look like a “Pinterest Nailed It” photo – so I outsourced this puppy!

10 Simple DRY ICE experiments for kids! Science at home or school!
10 Lunch Box Hacks That Will Save Your Sanity
Nature Play with Your Little Witch or Wizard
Christmas Games and Christmas Trivia Quizzes for Kids!
Tweet
Pin106
Share27
133 Shares