Bongaree Beach is My New Favourite Day Trip from Brisbane 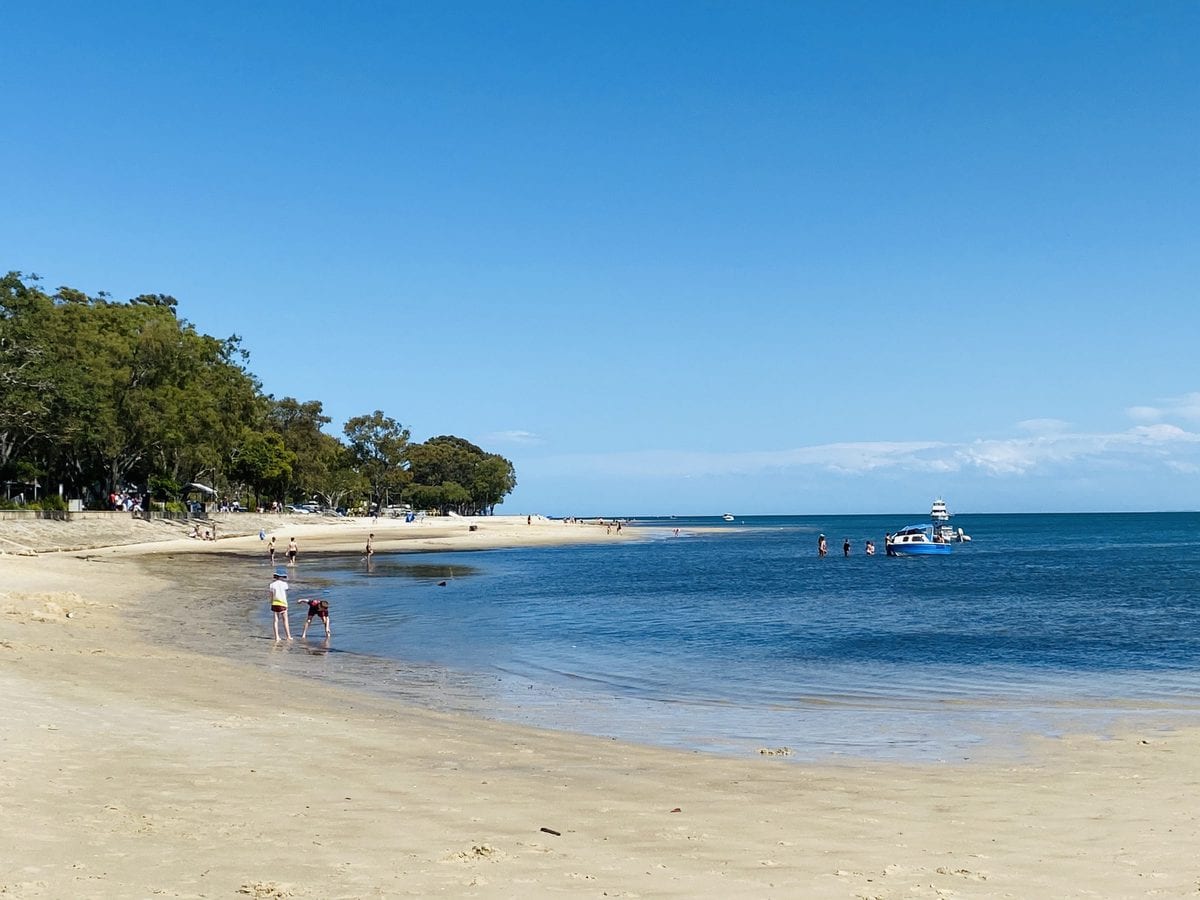 With crystal clear water, fine white sand and no waves to speak of, Bongaree Beach on Bribie Island is my new favourite day trip from Brisbane. Families with kids of all ages enjoy the beach and surrounding parklands, but it is especially suited to families with toddlers and primary aged kids. If you are lucky, you may even spot a dolphin or a dugong!

How to get to Bongaree Beach

Located on the western side of Bribie Island, Bongaree Beach stretches along Welsby Parade. You can get there by making a right turn as you arrive onto the island (technically you do a u-turn at the round-a-bout once you depart the bridge).

Bribie Island is connected to the mainland at Sandstone Point over the beautiful Pumicestone Passage. (Check out what is on at the Sandstone Point Hotel for families too!) It is about a 3 minute drive down Welsby Parade.

Families Tip: You can park on the street but there is a car park at Brennan Park if street parking is full.

With driving time of around one hour and a half north of the Brisbane CBD, it is an easy road trip straight up the motorway. This day out with kids is an easy escape from the same old same old of Brisbane suburbs.

Bribie Island was the home of the Gubbi Gubbi Aboriginal group who used bark canoes, nets for fishing and catching birds and spears for hunting local kangaroos and wallabies. The suburb of Bongaree is named after the Aboriginal explorer Bungaree who accompanied Matthew Flinders on a number of his voyages of exploration along the Australian coastline, including the islands in Moreton Bay.

What is at the Bongaree Beach for families? 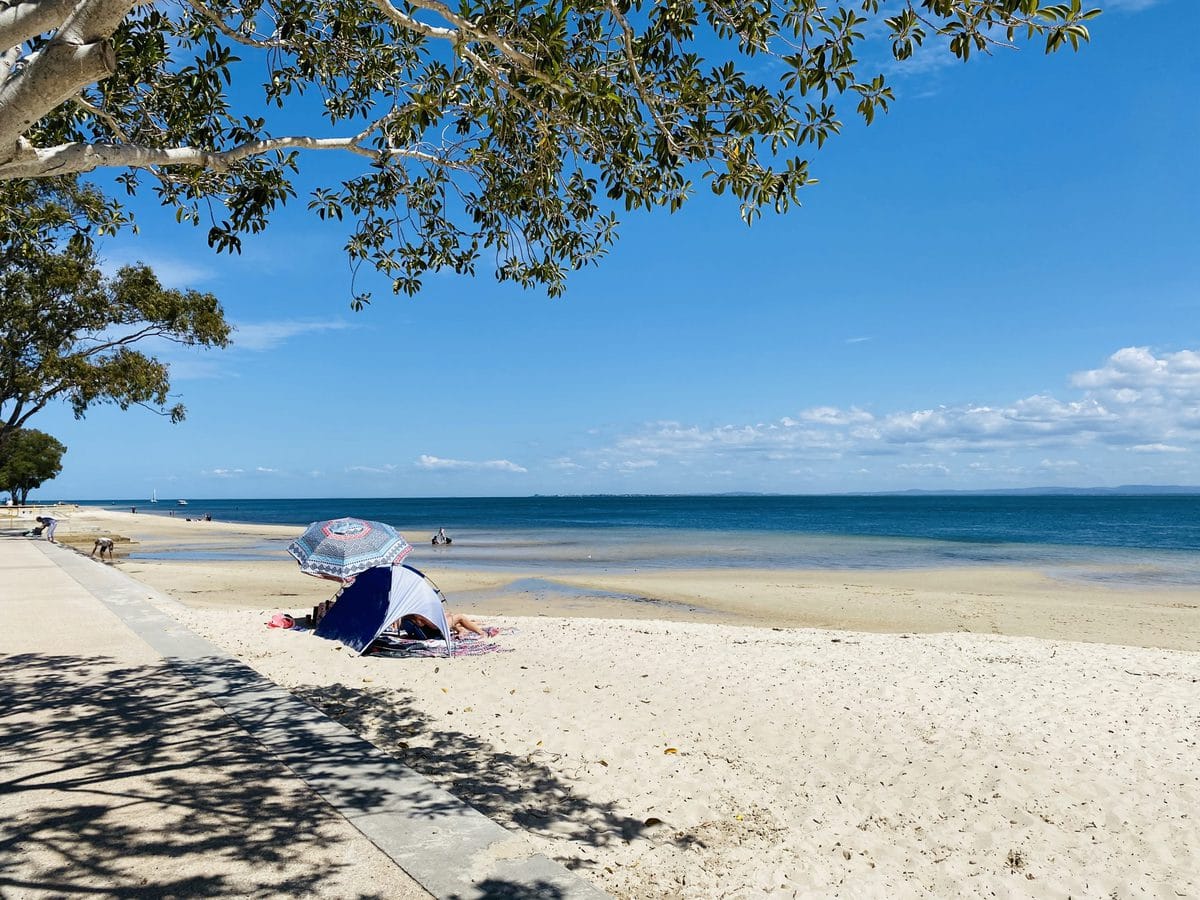 Bongaree Beach is a perfect beach for families with little children (and all families really!) As it is on the western side of the island, it is protected from the winds from the east and is often referred to by locals as *the calm side.* It is a long beach with multiple entry points, so you are unlikely to have to fight for space. We usually find a nice spot near the jetty.

If you have older children looking for a few more waves, then read our review of Woorim Beach on the other side of the island (a short 10 minute drive). It might be what you are looking for! 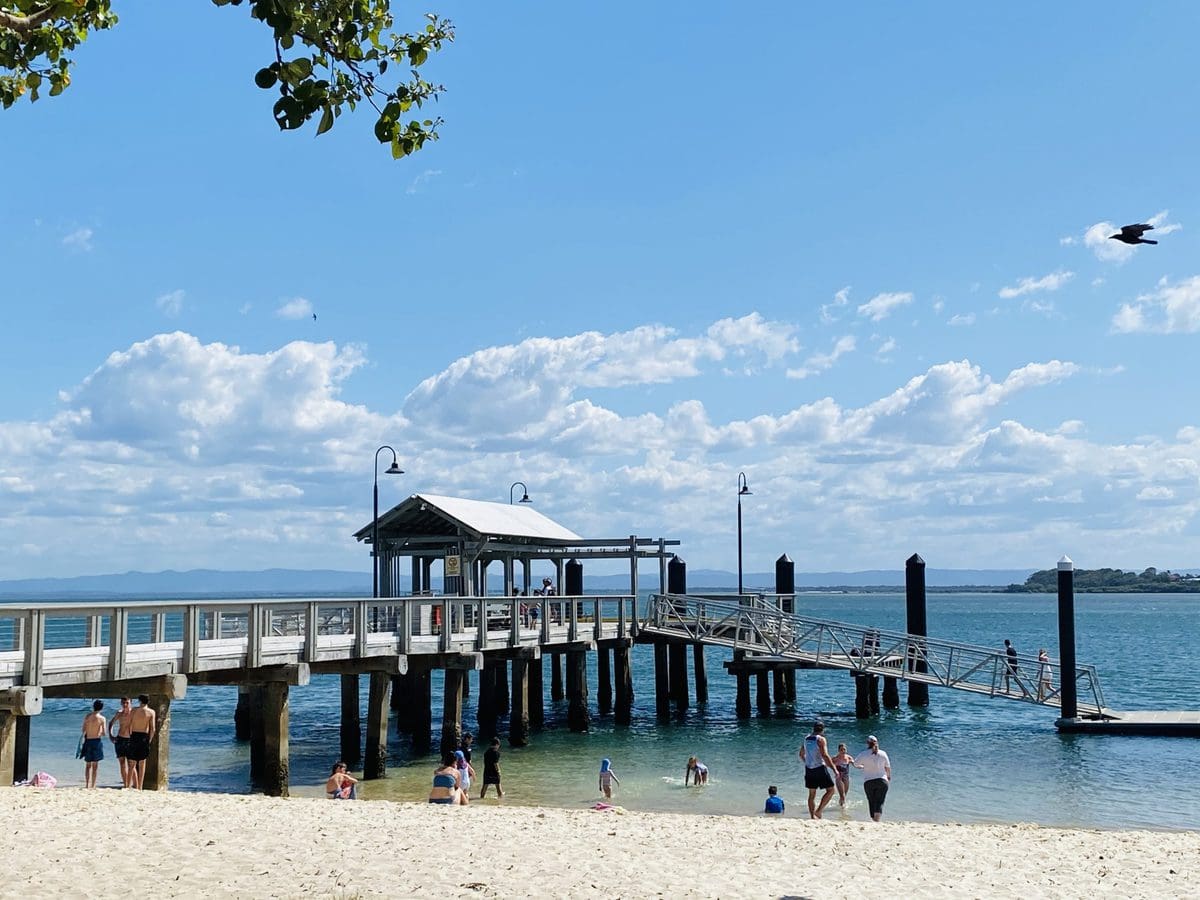 First built in 1912, the jetty is a great place for bigger kids to practice their jumping skills while landing safely in the water below. At the end of the jetty and along the boat pontoons we saw people fishing. In the warmer months you will find people around the jetty well after sunset.

On either side of the jetty are white, sandy beaches, although there is a larger sandy spot next to the jetty itself with a bit more room to spread out and play in the sand. 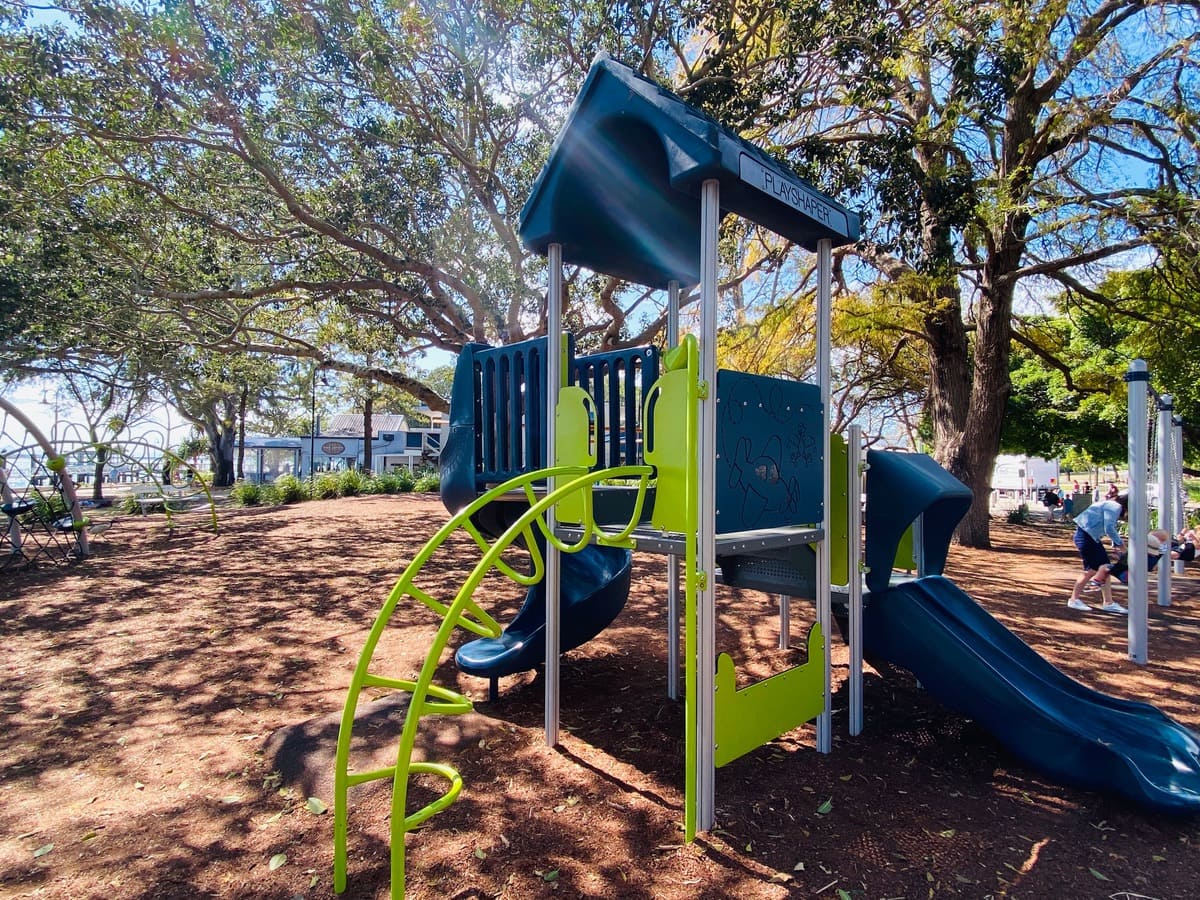 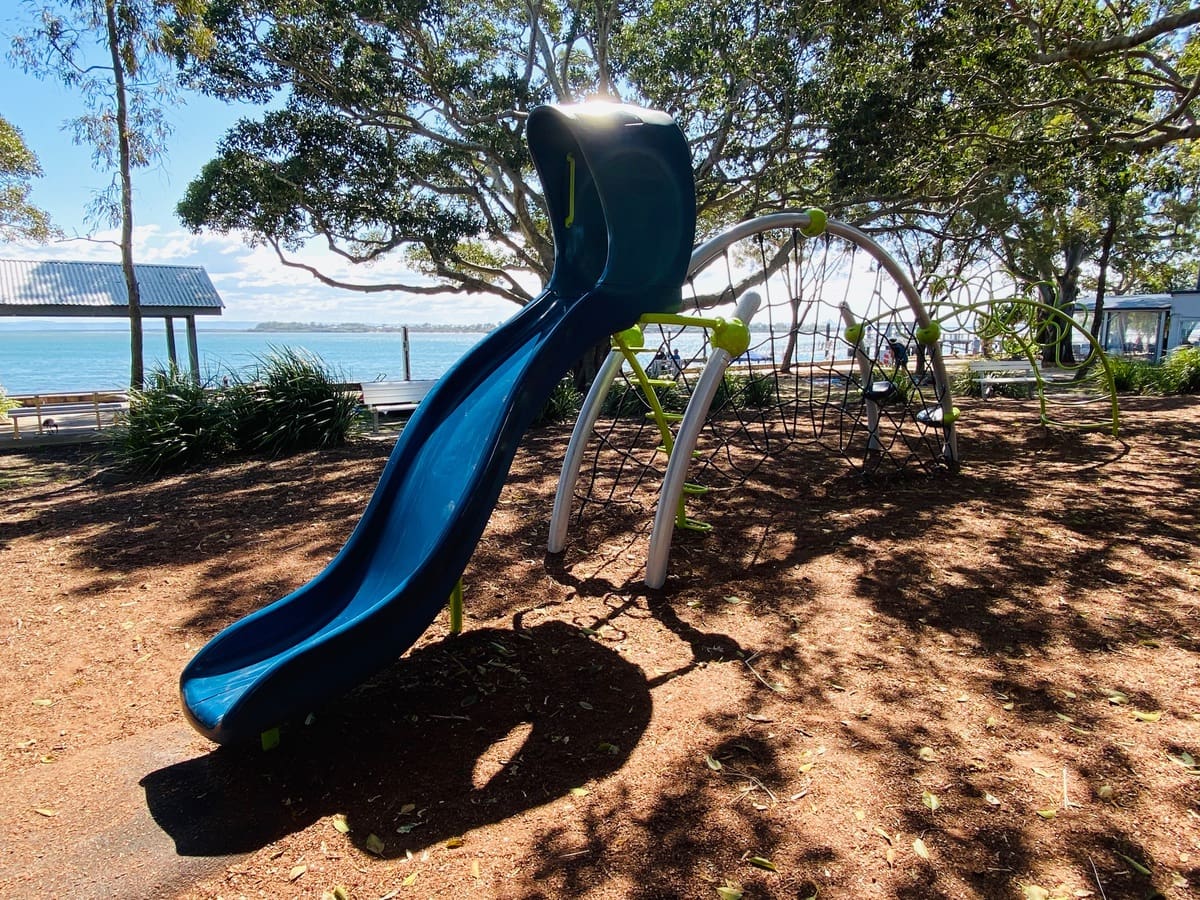 Located in Brennan Park, this is a good little playground for younger children. There is a climbing frame, 4 swings, a net/rope climbing frame and a small flying fox. 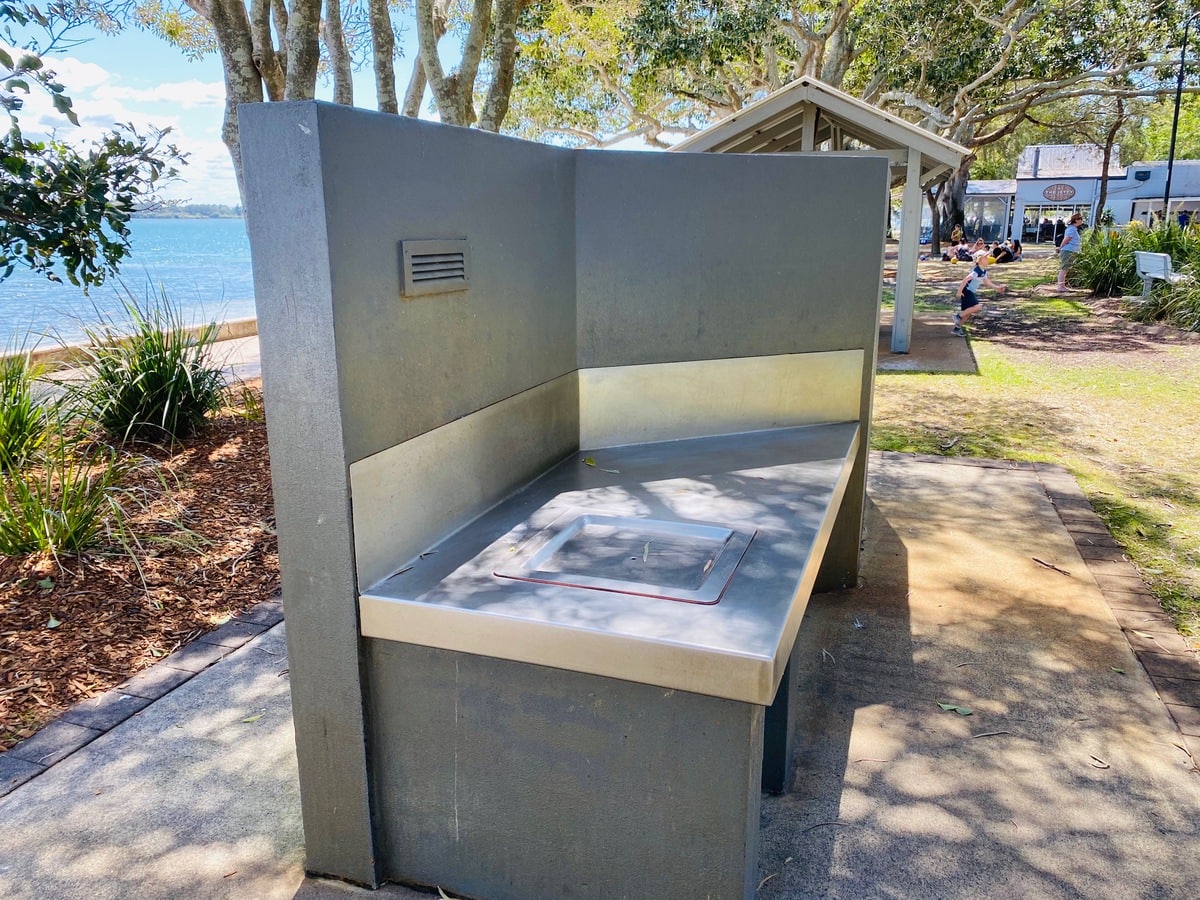 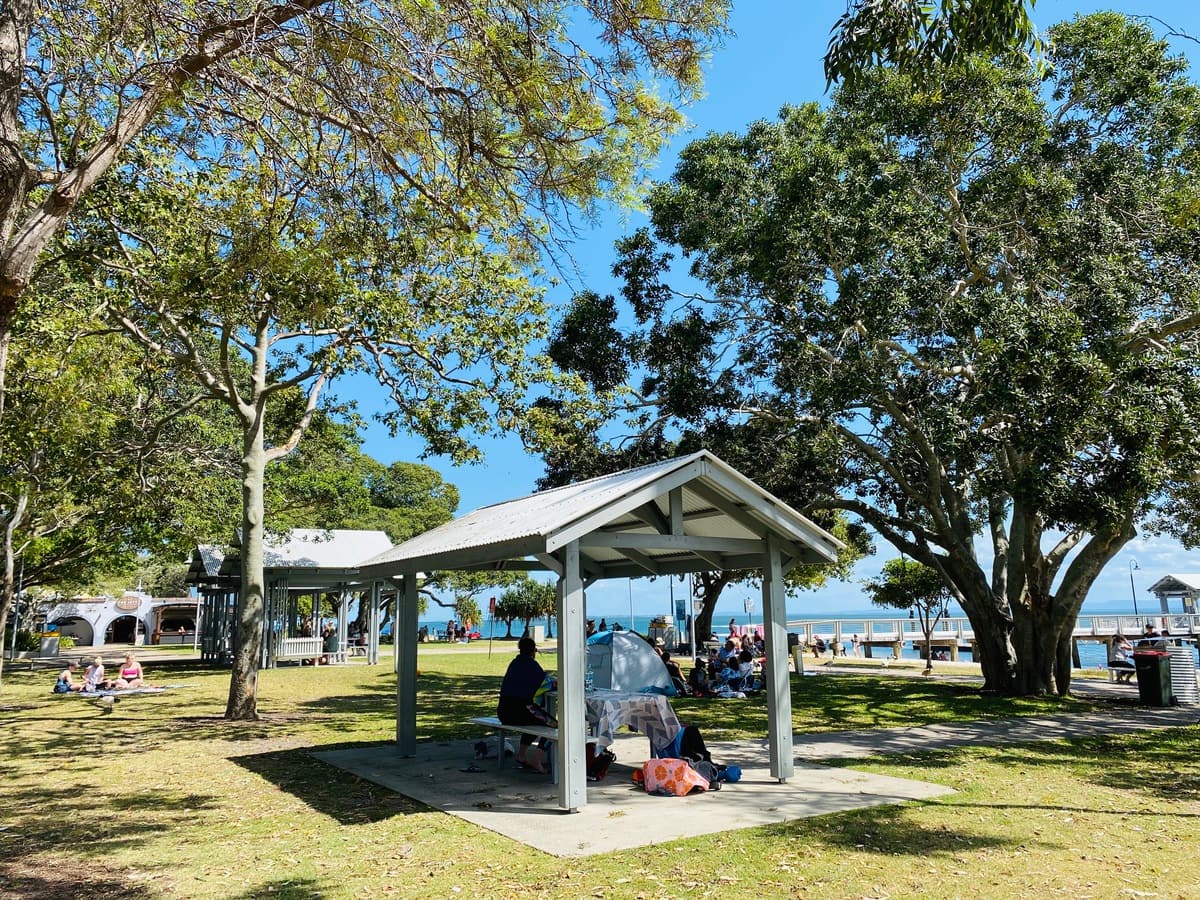 There are a plethora of picnic table and BBQs available for use. Like everything in a popular area, we would recommend arriving early to secure your BBQ of choice. 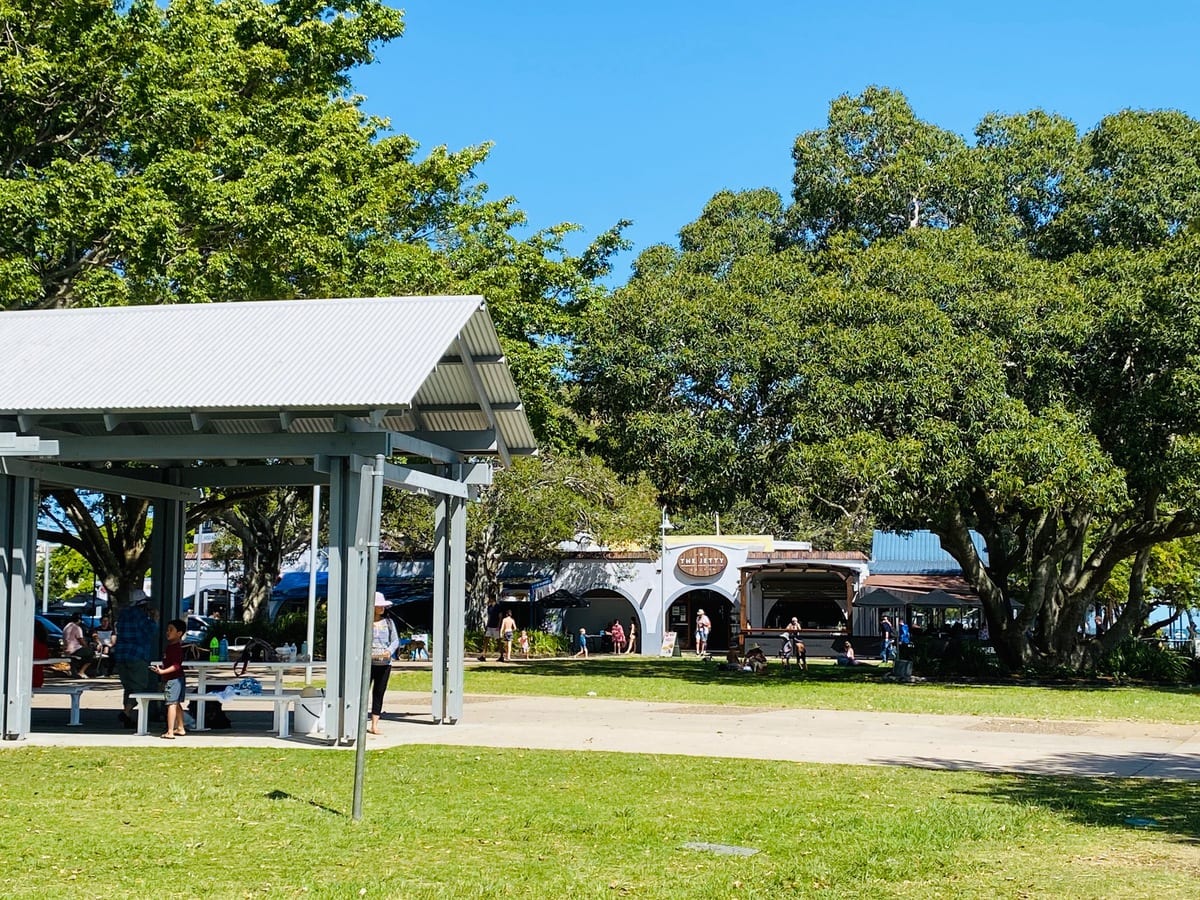 If you are not up for the effort of BBQing, and fancy a picnic, there are plenty of  shade trees and expansive lawns to sit on near the beach. 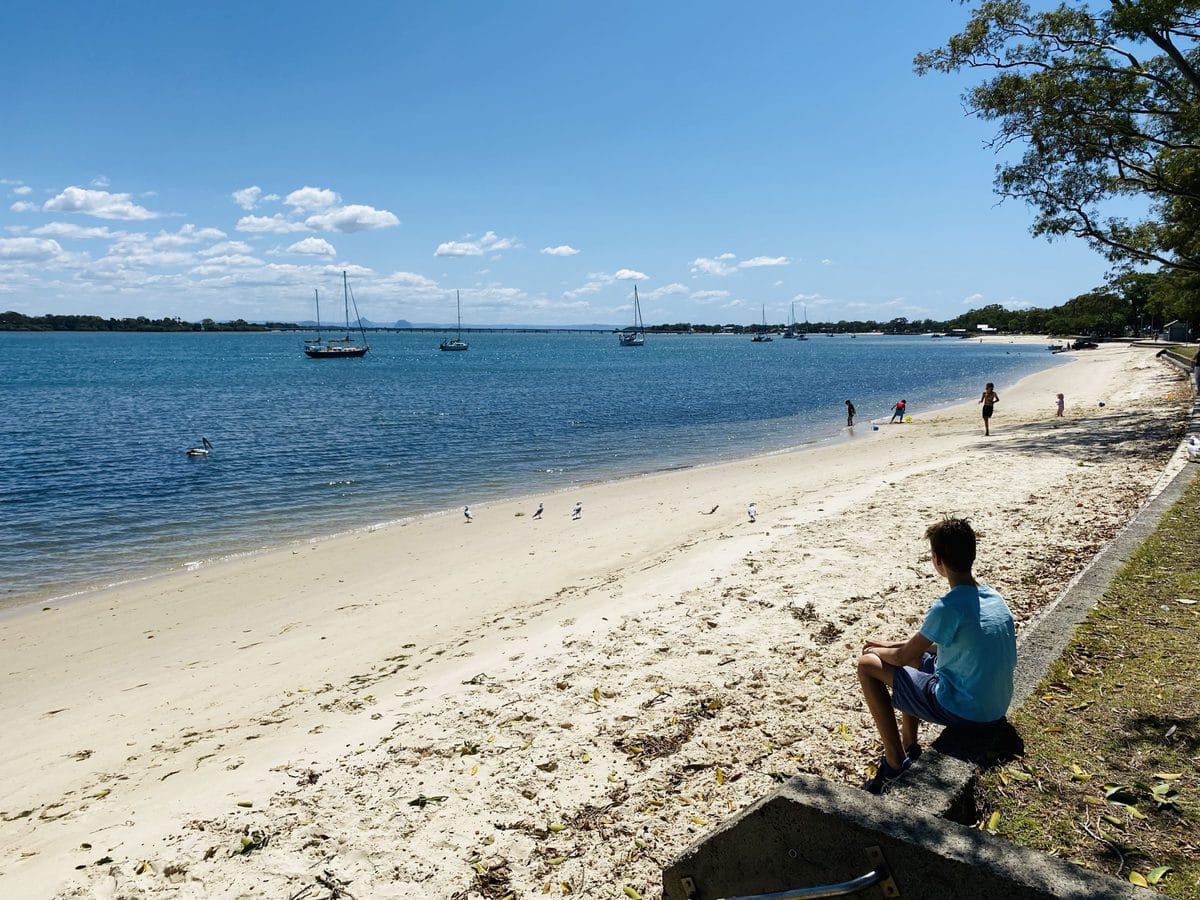 Along the foreshore of Bongaree, you can walk the Bribie Passage Seaside Stroll. It is a 4,990m or 6240 step trail from Bongaree Beach to the Bribie Island Bridge. Allow at least an hour for this… longer if the kids want to stop and play in the water along the way! 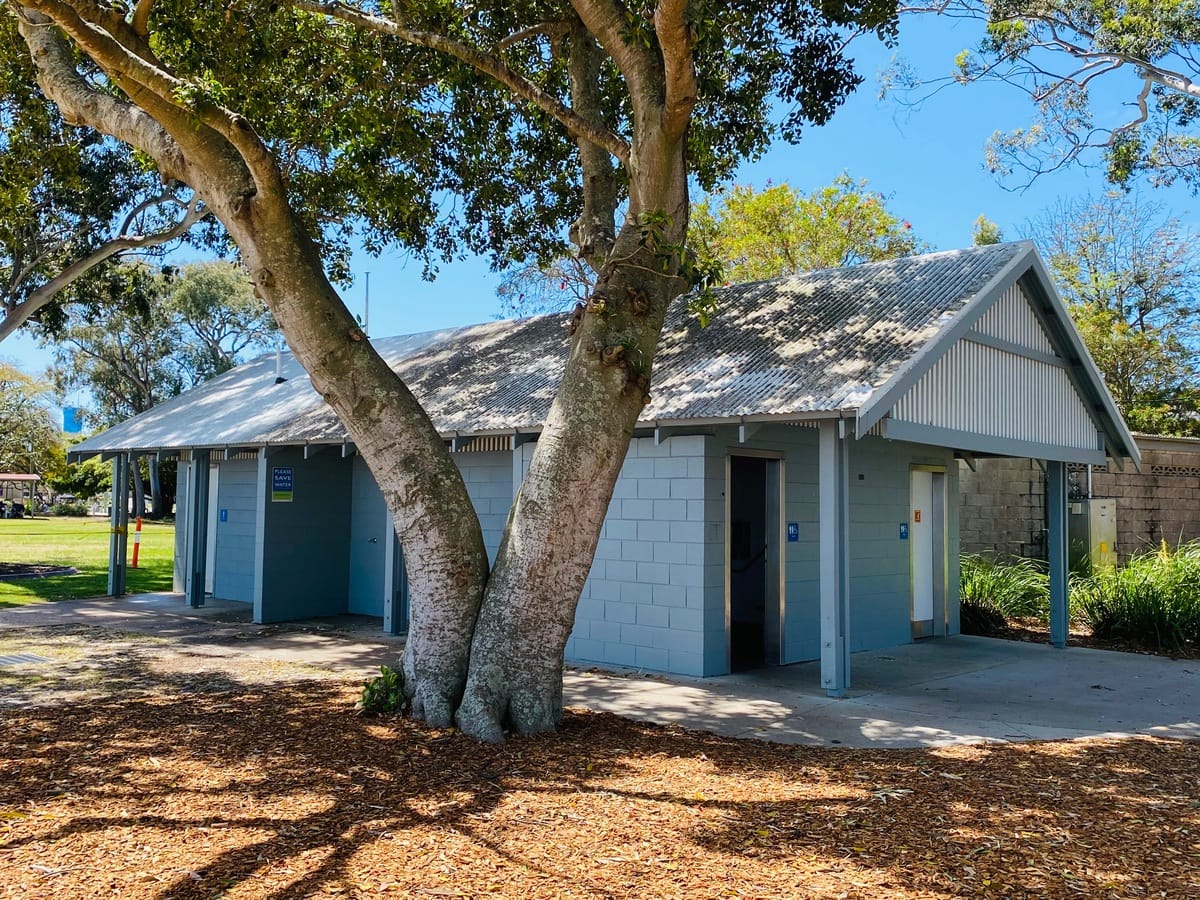 There are multiple toilet blocks located along the foreshore. 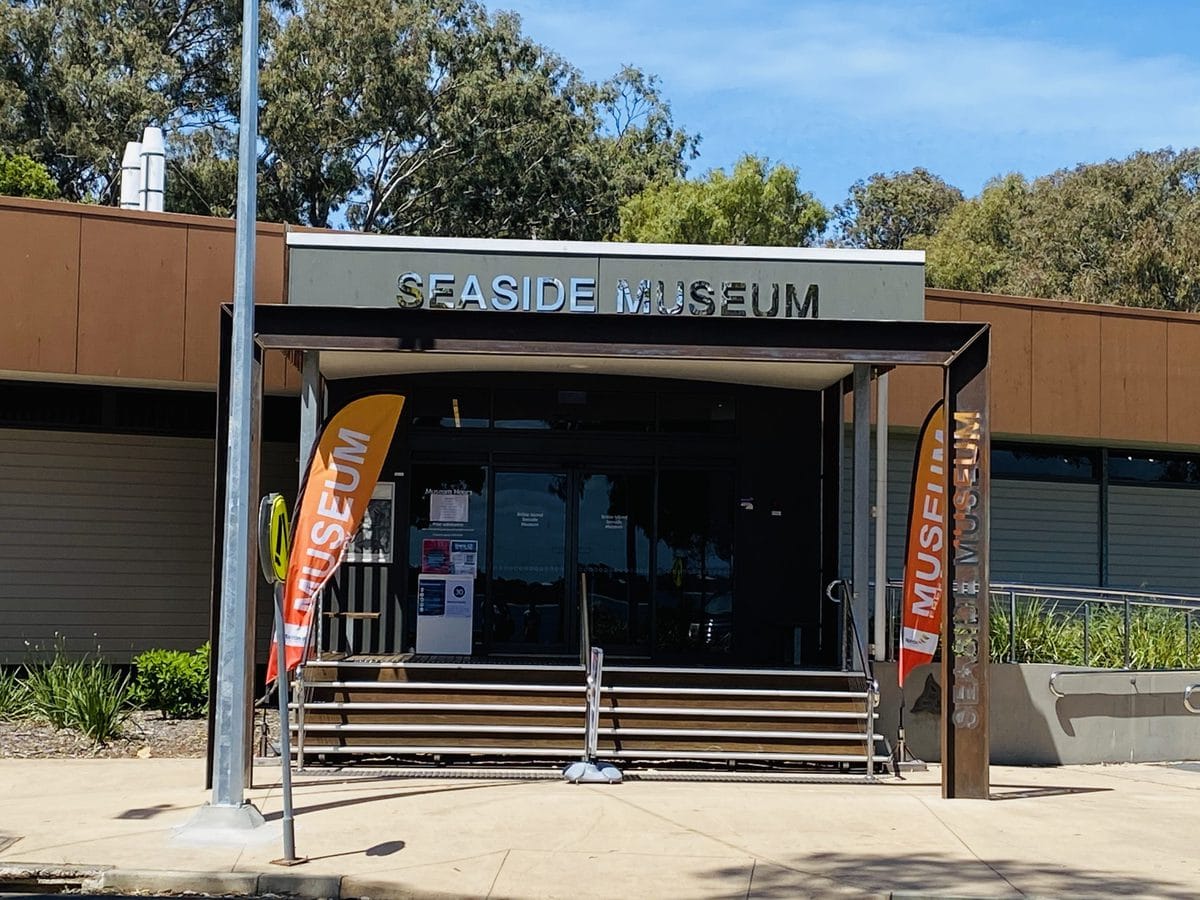 Explore the intriguing and fascinating history of Bribie Island in a beautiful, contemporary museum. The Bribie Island Seaside Museum is located at 1 South Esplanade at Bongaree. It is FREE to enter and is airconditioned.

Where to eat at Bongaree Beach

There are a multitude of places to eat that are close to the beachfront if you want to purchase a meal on your day trip. We chose @ The Jetty restaurant. It’s on the pricey end of places to eat in the area, but we loved the friendly service and the view couldn’t be beaten. 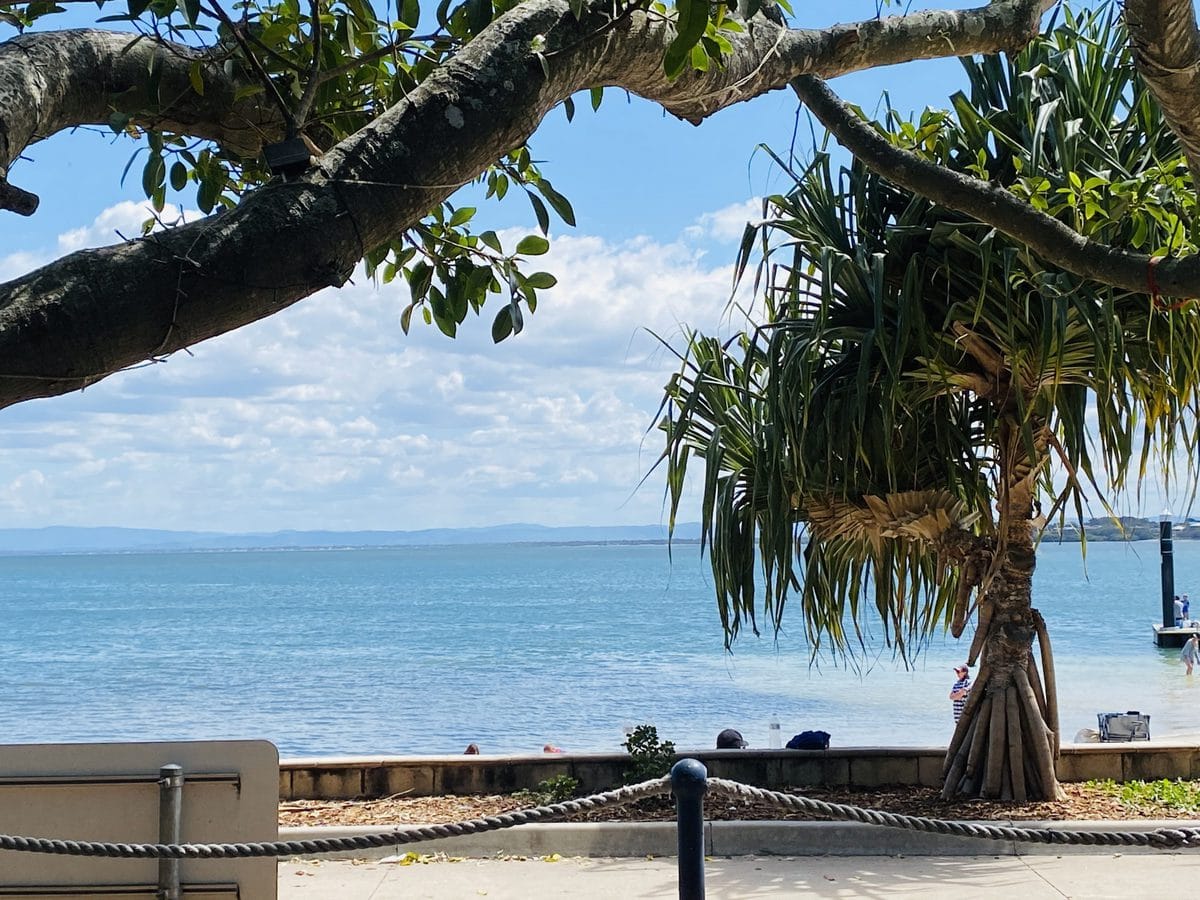 There are many other options some of which include:

Looking after the beach and recreation area

Wherever you explore, minimise your impact. Terrestrial and marine plants and animals depend on us to keep land, ocean and estuarine areas clean.

A day trip to Bongaree Beach

A day trip to Bongaree Beach on Bribie Island should be on everyone’s weekend or school holiday bucket list. It’s a great place to barbecue, picnic, swim, relax and wear the kids out. You won’t regret a visit here. If you go, we’d love to hear about your visit in the comments!

Want more day trips from Brisbane? Check out these:

We love day tripping out of Brisbane. So much, that we have written a tonne of articles about it!

Day trip to the Ginger Factory on the Sunshine Coast

Best things to do on a Noosa day trip

Go west to these day trips

When is the Next Super Moon? A Guide for Families
Families Fun at the NEW Eat Street Markets, Northshore! What's there?!
Lanham May Fair | A Fun Day Out for the Whole Family!
Fishing At Roma Street Parkland
Tweet
Pin
Share
0 Shares