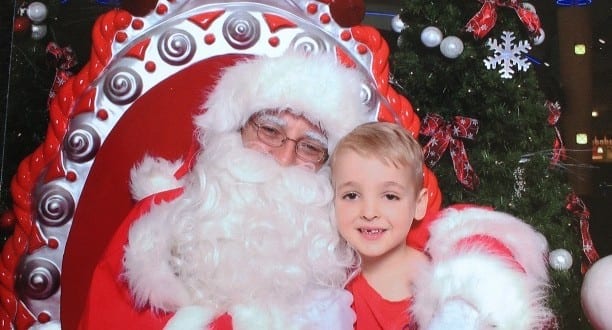 I’ve always loved Christmas. As a kid myself I always enjoyed the lead up to Christmas and the joy of having family and friends close by. Once I had my son, I looked forward to sharing Christmas with him as well. Most people I know tell the story of ‘Santa Claus’. He comes at a special time each year, to bring presents and spread joy, to fast asleep girls and fast asleep boys … what’s not to love!?

Finally and inevitably though, as parents, we will all be asked this question. I don’t know about you but I’ve been dreading the question since the very first time I celebrated Christmas and we were visited by Santa Claus with my son. How would I talk to him about the meaning of Christmas? What would I say to explain ‘Santa Claus’? Just how long could I keep the ‘magic’ alive? I’ve dealt with this question ‘is Santa Claus real?’ a few times already, and my son is only six!

The first time my son asked me about Santa Claus it was easy to explain – because he was three:

‘Santa Claus comes down the chimney and brings presents for good children!’ Job done! He was three and all he heard was ‘be good to get presents’. And at the time I was chuffed that the story had been so easy to ‘sell’. I know someone who has decided not to embellish the ‘story’ of Santa Claus.

She has told her children that Santa Claus is NOT real, right from the start, from when they were very small. This year her four year old said ‘Mummy, I want to believe in Santa Claus. Can we please pretend he’s real?’ She agreed.

There is no simple solution!

When my son was five and a half we were driving down the motorway one December afternoon and my son straight up asked me ‘Mummy, is Santa Claus imaginary?’ While I was contemplating the answer he interrupted my thoughts and said ‘Ohhh, look a digger, a red digger… normally diggers are yellow or orange aren’t they Mummy?’ and in that split second the conversation had changed and I was absolved the responsibility of answering the question (honestly/at all!)

This year, at six and a half, the question is not so much about real or imaginary but more about the logistics… ‘how does Santa Claus get into our house if we don’t have a chimney?’, and ever the safety conscious ‘do we need to leave the door unlocked ALL night?’… answers ranged from ‘magic door keys’ to ‘helpful elves’.

If you DO have a chimney – this is how Santa comes down the chimney:

As I navigate my way through this parenting caper, I wonder constantly at what point you tell them various ‘truths’… Not just about Santa Claus, but about those other ‘visitors’ that have frequented our house over the years. Sadly (or creatively, depending on how you look at it) I have told him that the Tooth Fairy brings $2 for every tooth, (in an envelope with a letter slipped under his pillow) and the Easter Bunny brings chocolate eggs and books. (I have made both the Tooth Fairy and the Easter Bunny female, which he has no problem accepting!)

I have sprinkled glitter on the driveway for a ‘landing strip’ for the Jolly Man on Christmas Eve and I’ve routinely chewed up and spat out carrots year after year to show where the reindeer have munched on our offerings. We leave milk and a cookie for Santa Claus as well…..

Keep the magic alive…. it will all pan out ok in the end!

I know at some point someone at school will share their version of the truth and I will have to ‘readjust’ my story…again!

I don’t even remember when I found out that the man in the red suit wasn’t real. But what I do know for sure was that it was not a crushing disappointment, nor has it scarred me for life.

For now I will work with the story that a good friend has shared about her son ‘I told him, ‘If you believe in Santa Claus, you still get presents”. That sounds like the way forward for me… for now…

Looking for ideas to make Christmas extra special this year?

Why not check out our list of 10 Christmas Traditions to Start With Your Family.

Over the years the idea of a special December 24th family gift to enjoy together on the night before Christmas has grown in popularity. Find out the ultimate Christmas Eve Box Ideas here.

If your little ones are still in love with the idea of Santa here’s how you can arrange an extra special Personalised Video Message From Santa.