Home » Greta Thunberg Climate Activist | Why Everyone is Talking About Her!

Greta Thunberg Climate Activist | Why Everyone is Talking About Her! 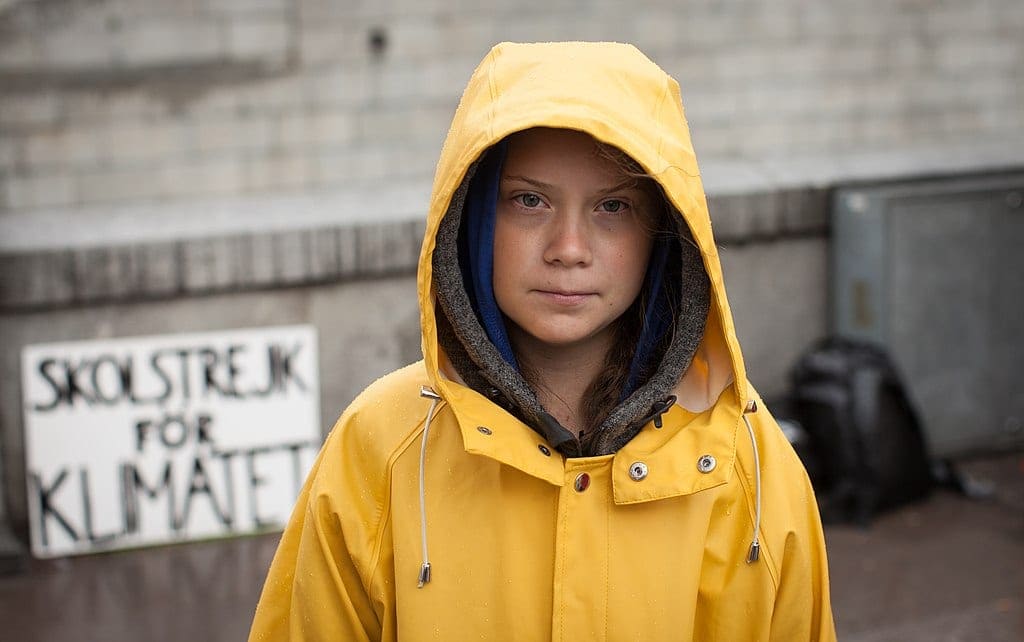 Right now the media is abuzz with talk of Greta Thunberg. She is the original driving force behind the youth movement, School Strike 4 Climate Change, also known as Fridays For Future (FFF) and Youth for Climate.

If you don’t know who Greta is, or would like to learn more about what she stands for, this article will give you the facts about Greta Thunberg for students and kids.

Who is Greta Thunberg?

Greta Thunberg was born in January 2003 in Sweden, a country in northern Europe renowned for its high standard of living, excellent health care, and quality education system. It’s also widely considered to be rather environmentally friendly. The capital, Stockholm, was voted Europe’s first “Green Capital” in 2010 for successfully reducing emissions by 25% and increasing open green spaces. Stockholm aims to reduce its use of fossil fuels to ZERO by 2050.

Greta first became aware of climate change in 2011 as an eight year old. Sweden was actively working towards providing a better environment, but Greta was saddened and angry that change was taking place so slowly, and that more was not being done by other countries.

Greta’s concern for the environment, her worry that she was just a ‘small voice’, and her fears for the future lead to her becoming withdrawn, anxious and depressed. Her parents, opera singer Malena Ernman and actor Svante Thunberg, sought medical help and Greta was diagnosed with Asperger Syndrome and Obsessive Compulsive Disorder. Rather than letting her diagnosis hold her back, Greta claims her Aspergers is her superpower, allowing her to be more focussed and direct about climate change.

She began to see what changes could be made in her own home and to find ways in which her family could reduce their negative impact on the environment. Greta encouraged her parents to become vegan and reduce energy usage. Her mother, moved by Greta’s passion, even gave up her international singing career because it required flights to other countries.

Why is Greta Thunberg famous?

In August 2018 Greta, then in grade nine, took time off school to demonstrate outside the Swedish Parliament. Holding up a sign saying “skolstrejk för klimatet” – school strike for climate – Greta vowed not to return to school until after the Swedish general election on September 9. Instead, she took her sign and protested every school day, demanding that Sweden reduce carbon emissions. Following the election, she continued to strike every Friday stating that she would not return fully to school until Sweden aligned with The Paris Agreement. The Paris Agreement is an agreement signed by all countries in the United Nations outlining their plans to reduce greenhouse gas emissions.

Greta’s protest and daily appearance outside the Swedish Parliament gained media notice. She made headlines in her own country, and soon her photograph and story was seen in international newspapers and on websites around the world. She was invited to speak on behalf of youth and climate change at events in Sweden, then wider Europe, and eventually travelled to New York to speak at the United Nations Climate Action Summit on September 23, 2019.

Greta was not the first student to strike for climate change. A group of independent students across the world got together online to organise a global student strike for climate on November 30, 2015 – the first day of the United Nations Conference on Climate Change which was held in Paris. Greta organised her own school strike for climate in 2018 after becoming frustrated with the delay in putting the changes proposed by The Paris Agreement into action.

What has Greta Thunberg done to effect a change?

The photos of a solitary school child in a yellow rain coat, striking day after day in Sweden, inspired conversations across the globe. She brought attention to the issue of climate change and reminded people that hers is the generation that will suffer any negative future effects from the actions, or inaction, of adults and world leaders today.

People noticed Greta’s passion and invited her to speak at local, national and international events. Greta’s speeches were published in a book titled “No One Is Too Small To Make A Difference” and all proceeds from sales are donated to climate change charities.

Greta has urged world leaders and global corporations to act “as if your house is on fire”. She feels that there is a lack of recognition of the climate crisis and not enough urgency or panic about resolving issues before it is too late. “Our House is on Fire” is the title of a book written by Greta and her family in 2019. It details Greta’s family background and her story, and it has already been published in many languages and sold worldwide. 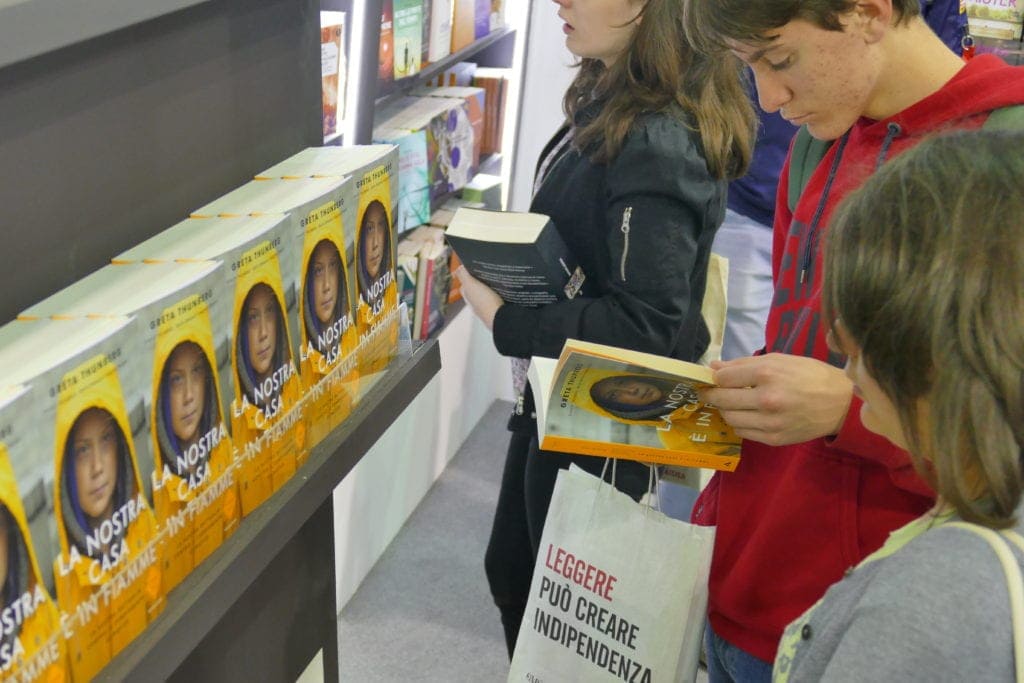 How Greta inspires others

Students around the world are seeing how one child can be noticed, and one voice heard, and they are joining a growing movement to bring about changes before it is too late. Almost every Friday there is an organised “School Strike for Climate” or #FridaysForFuture protest lead by students somewhere in the world.

Greta’s voice is one that refuses to be ignored. Her passionate and articulate conference speeches, and her direct way of speaking to her audience, is forcing world leaders and politicians to take notice and hear her message.

On September 17, 2019, Greta Thunberg received the Amnesty International Ambassador of Conscience Award for Fridays for Future. Greta has also been nominated for 2019’s Nobel Peace Prize.

What Greta Thunberg’s critics are saying

Not everyone is in support of Greta Thunberg. Since her speech at the United Nations Climate Action Summit in New York, and even before that, Greta has drawn criticism from media personalities and politicians. Social media has been full of comments ranging from climate change denial (they believe that climate change is not caused be people – and that we don’t need to change what we are doing), to derogatory comments about Greta’s appearance and manner of speech, to criticism of her family for allowing her to become an ‘outspoken upstart’. Many of her critics feel that she should just go back to school and that she is too young to have a valid or educated opinion.

Many adults don’t like the idea of a child telling them they are wrong, or forcing them to think about the way things are done. Big corporations and governments have other concerns; there’s lots of money to be made from international trade and fossil fuels… planning for a sustainable future is time consuming and expensive… shouldn’t other countries be doing something first? There’s also the old-fashioned view that ‘children should be seen but not heard’ (i.e. be quiet and respectful and don’t disagree with the grown-ups).

“The youth of today”

Some adults feel it unfair that they are being accused of causing climate destruction and instead feel the blame should lie with the youth of today, who are big consumers of new products and gadgets. Maybe they forget that it is not the youth of today who invented plastic and turned fossil fuels into petrol and electricity, nor is it the youth of today who bought their parents cars for the school run or booked international flights for holidays, or who created massive landfills where household waste is conveniently whisked away out of sight. But it is the youth of today who will be the adults of tomorrow, and they’re the ones who will be cleaning up the world.

Greta is a hypocrite!

Many of Greta’s critics pick up on small things they see in the news or on social media and don’t look into the background to gather all the facts. Greta lives in Sweden, which is an ocean away from New York in America. Immediately after her appearance at the United Nations Climate Action Summit on September 23, 2019, many of her critics assumed she had to have flown there. And what of all the technology she must use to push her agenda?

In fact, Greta made the two-week journey to America by carbon-neutral boat, built from recycled materials and powered by the wind and sun. Critics noted that her crew are FLYING back to Europe but Greta’s message is that those who advocate for change must lead by example, and that is why she refused to fly herself.

And of course Greta needs to use technology – how else could she share her message to the world and raise awareness of climate change issues?

What can you do to help the climate?

Have you taken part in a school strike for climate? What were your reasons for taking part? Was it simply a day off from school, or were you motivated by concerns over climate change?

There’s no denying that organised protests receive media attention, but there are lots of little things that can be done and small every-day changes can add up to a big difference for the climate. 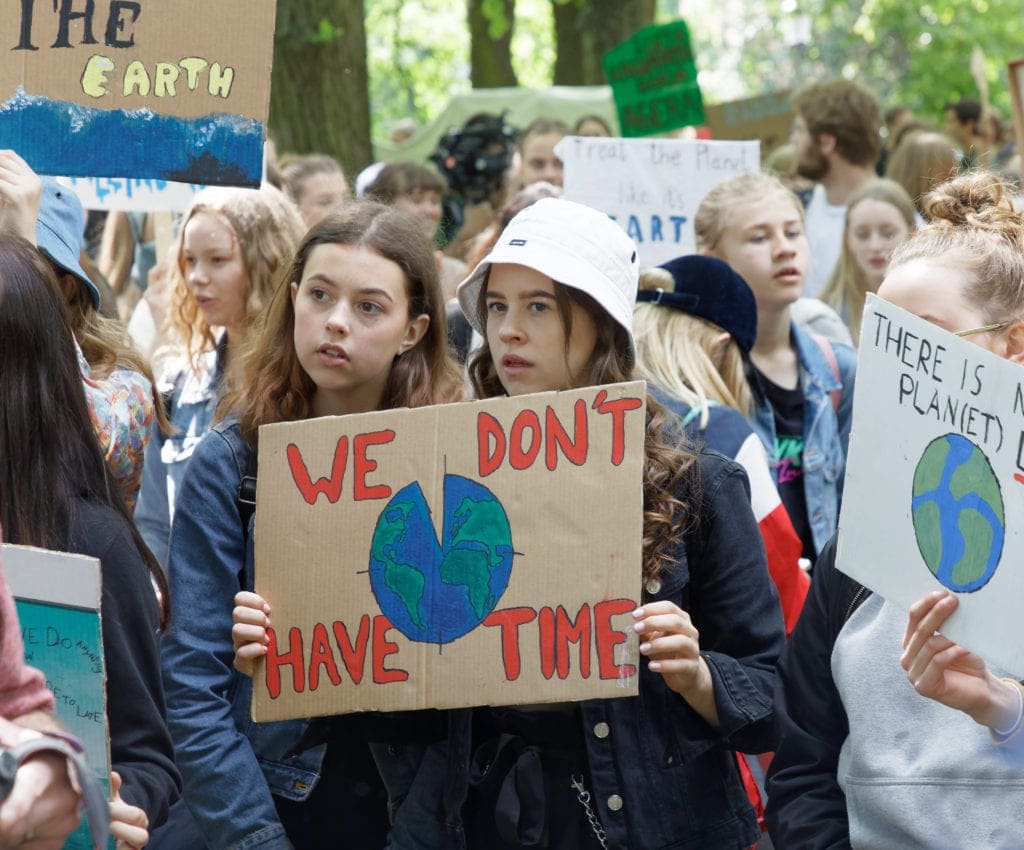 STOCKHOLM, SWEDEN – MAY 24, 2019: Global Strike for Future, a demonstration to force the heads of state to make decitions to stop the climate change.

Can Fidget Spinners Benefit Kids with Autism and/or Anxiety?
7 Ways To Effectively Praise Your Child
ANZAC Day Crafts For Primary School Kids
Is your Child’s Vocabulary Holding Them Back?
Tweet
Pin
Share188
188 Shares