The Abbey Medieval Festival in Brisbane 2022

The Abbey Medieval Festival Tournament Weekend is back from 9-10 July 2022! With its kaleidoscope of music, colour, pageantry, and time transforming ways, it calls to us now more than ever!  The Abbey Medieval Family Fun 2022 runs 27 June – 1 July 2022.

About the 2022 Abbey Medieval Festival

It’s true! Every year when the planets align a certain way, a time portal opens up on Abbey Place, Caboolture, allowing you to slip back hundreds of years to the Middle Ages. Stepping through the portal the air rings with the clashing of swords, the ground shudders to the thundering of hooves, and crowds cheer the clang of lance upon shields! Meanwhile, maidens dance to the tunes played on pipes and drums. The Abbey Medieval Festival invites you to experience the sounds, sights and smells of this magical medieval era for yourself.

Don’t worry, slipping through the time portal is entirely reversible – and you’ll still have a phone signal and access to flushing toilets – but for two whole days you can immerse yourself in another world entirely.

The Abbey Medieval Festival is an annual highlight, with the highly anticipated Tournament Weekend happening this year on Sat 9 and Sun 10 July 2022. It attracts over 1000 world-class Medieval re-enactors keen to give you a taste of what life in the Middle Ages was like. It is one of Australia’s premier living history events, providing Festival-goers with an engaging and immersive experience of the Middle Ages. 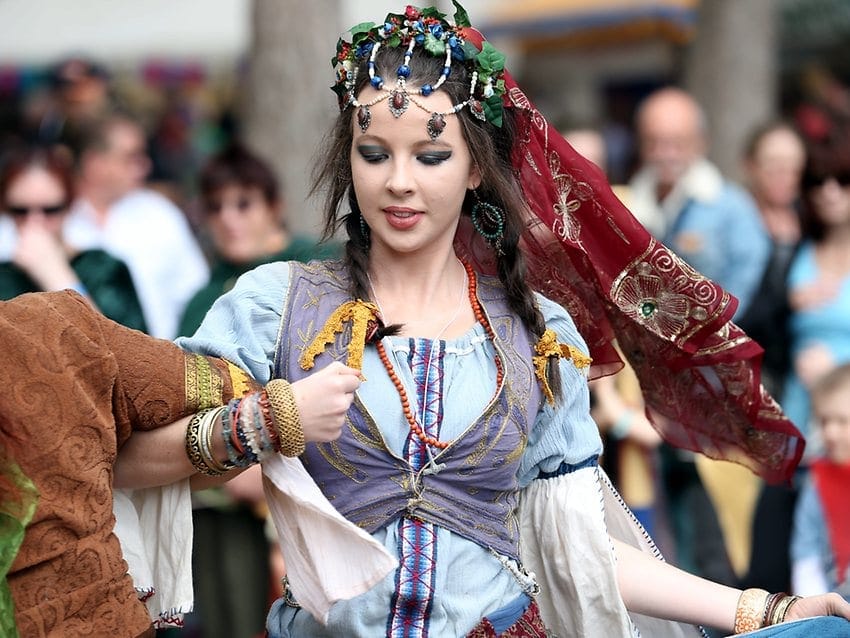 When was the medieval period?

The medieval period covers a time from around 600-1600CE, from the fall of the Roman Empire through to the beginning of the enlightened Renaissance Period. That’s a lot of years! Medieval literally means Middle Ages. Wikipedia does justice to this period here.

For peasants, the medieval period was a simple time of hard work on the land farming for their lords and living in simple huts, often with their farm animals to provide warmth. Their diet would have comprised of a lot of gruel, stew and porridge with a bit of salt-meat through the winter.

Some people were skilled craftsmen and artisans and enjoyed a slightly higher status. They would have been blacksmiths, tailors and shoemakers, basket weavers, saddlers, coopers (barrel makers), wainwrights (wagon builders), carpenters and builders, amongst many other trades.

If you were wealthy or a landowner, you might have lived in a manor house or castle and had servants of your own. You would have enjoyed lots of fancy roast meats, tasty pastries, and delicious banquets, with entertainment provided by travelling musicians, storytellers, actors and jesters.

The medieval period was also a time of brave knights and fair maidens, fabled dragon-slayers, jousting and battles, castle building, and marauding Vikings! It wasn’t all hard work in the Middle Ages; people enjoyed many public holidays and festivals based around the religious calendar and traditional pagan celebrations, and the Abbey Medieval Festival perfectly recreates the atmosphere of these fun occasions. 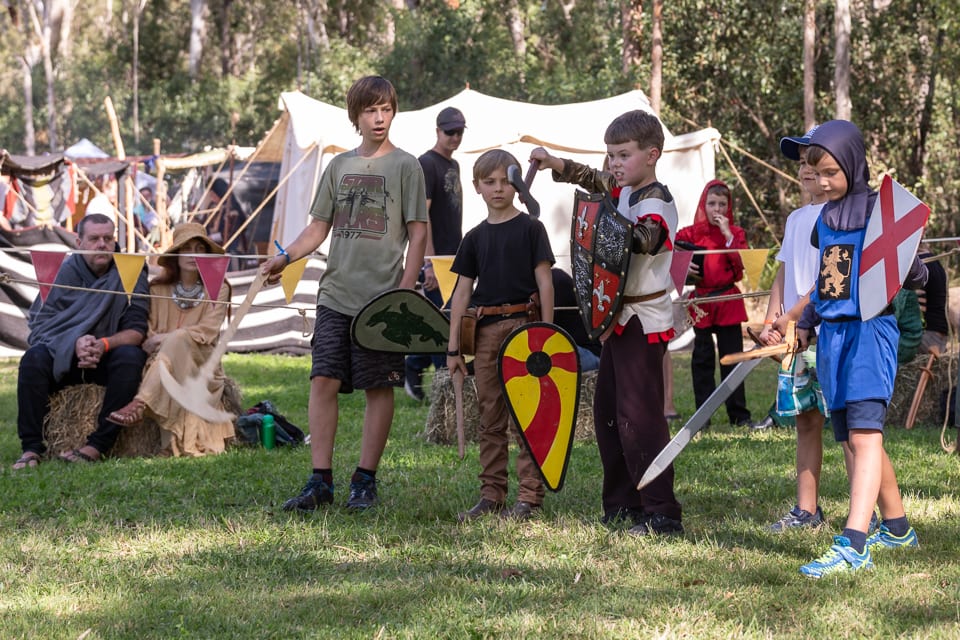 This mini Medieval Festival runs 27 June – 1 July ahead of the ‘Tournament Weekend’ and features many of the experiences on offer over the weekend, but with a special focus on making them fun and engaging for the younger members of the family.
The Abbey Museum will welcome families for a special week full of medieval-themed fun activities for the kids and, of course, parents.  The week will be jam-packed with fun things to keep your young squires or maidens entertained and engaged during the school holidays with plenty of opportunities for hands-on fun and education.

Come and enjoy the adventure as history is brought to life.

On Friday 8 July 2022, you can join the Knighting Ceremony held inside the beautiful Anney Church. Entry is free, however, there is limited space so booking is essential.

On 9 and 10 July 2022 you can relive the days of yore and experience the sights, sounds, tastes and aromas of the Middle Ages! Step back in time and immerse yourself in the colour and pageantry of the Medieval World. There will be fighting displays, jousting, falconry, dancing, music, drama and presentations of medieval arts and crafts. Wander around the medieval encampments and talk with re-enactors as they go about their day, or stroll through the markets where you can purchase all manner of medieval wares or delicious foods. The festival is jam-packed with things to see and do. 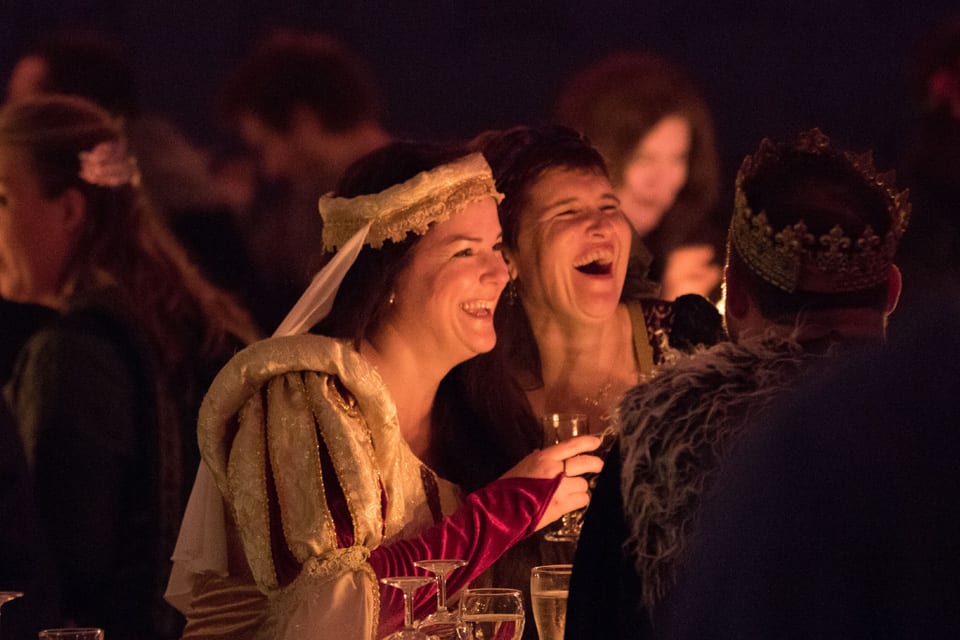 The Ottoman Wedding Banquet on 9 July 2022 is a truly immersive experience for die-hard medieval fans, food buffs and anyone looking for an evening of food and entertainment that is totally out of the ordinary.

Set against the background of traditional Ottoman yurts, as the sun sets over Abbeystowe, you are invited to join members of the Janissary Barracks to celebrate an authentic Ottoman Wedding Feast.

Guests are treated to an authentic Turkish banquet with dancing, music, and all manner of traditional entertainment. Guests may choose to sit on cushions in the traditional Ottoman manner, or for those who would prefer, benches and high tables will be provided. Whilst attending in costume is not compulsory, it is strongly encouraged to get you into the spirit of the event.

Tickets must be pre-purchased for this limited seating event.

Tickets for all of the 2022 Festival events are on sale here.

The Tournament Weekend is the highlight of the Abbey Medieval Festival program – an amazing weekend that you need to see to believe! This year’s dates are Sat 9 and Sun 10 July 2022.

What will we see at the Medieval Tournament Weekend? 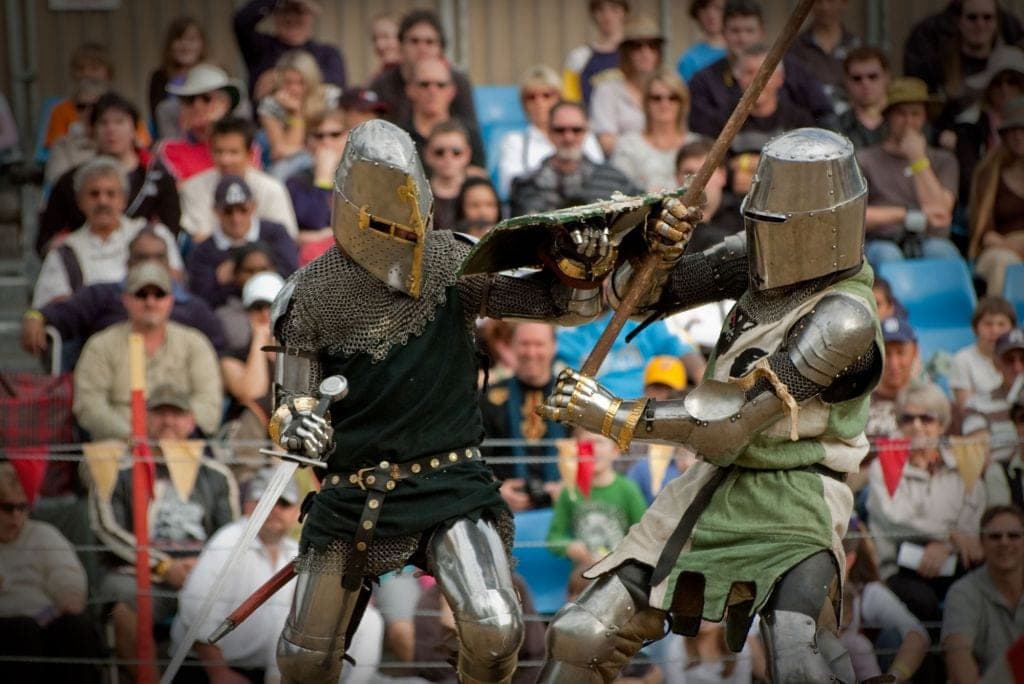 The Abbey Medieval Festival is an authentic medieval experience, with over 1000 enthusiastic re-enactors bringing the Dark Ages, Middle Ages and early Renaissance Period to life. You will see many medieval villages and encampments recreating the life of ordinary peasants, Vikings, Ottoman Empire Turks, campaigning knights and travelling entertainers. There will also be craftsmen and women demonstrating their skills, historical re-enactments and competitions, and so many things you can experience for yourselves.

Here’s a rundown of some of the things to expect: 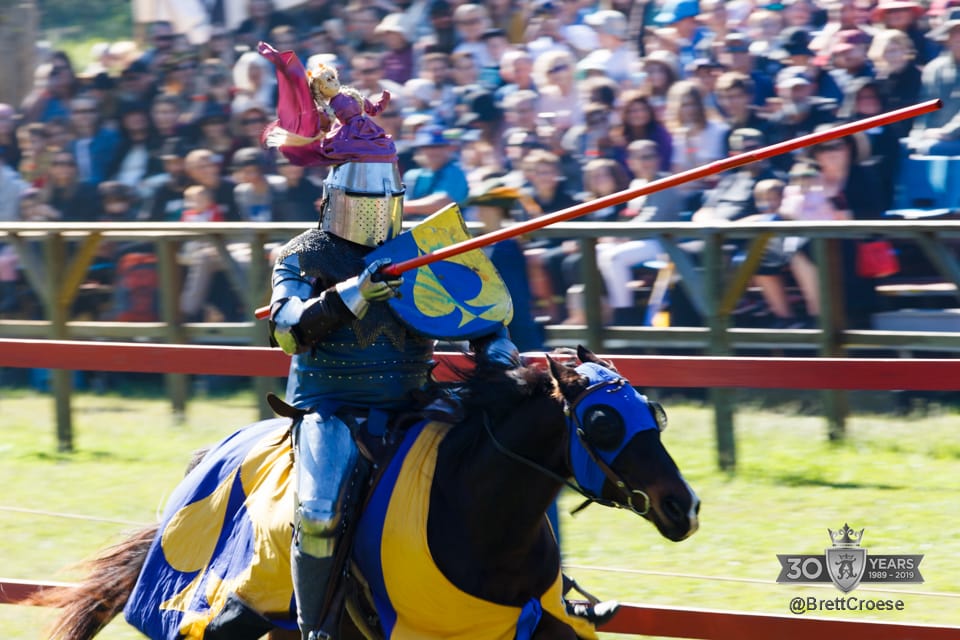 Everyone loves the jousting! See the brave knights on horseback thundering towards each other as they use their lance to try to knock their opponent out of their saddle. The Joust at the Abbey Medieval Festival depicts a 15th century tournament. The best of Australian jousters will compete for the title! 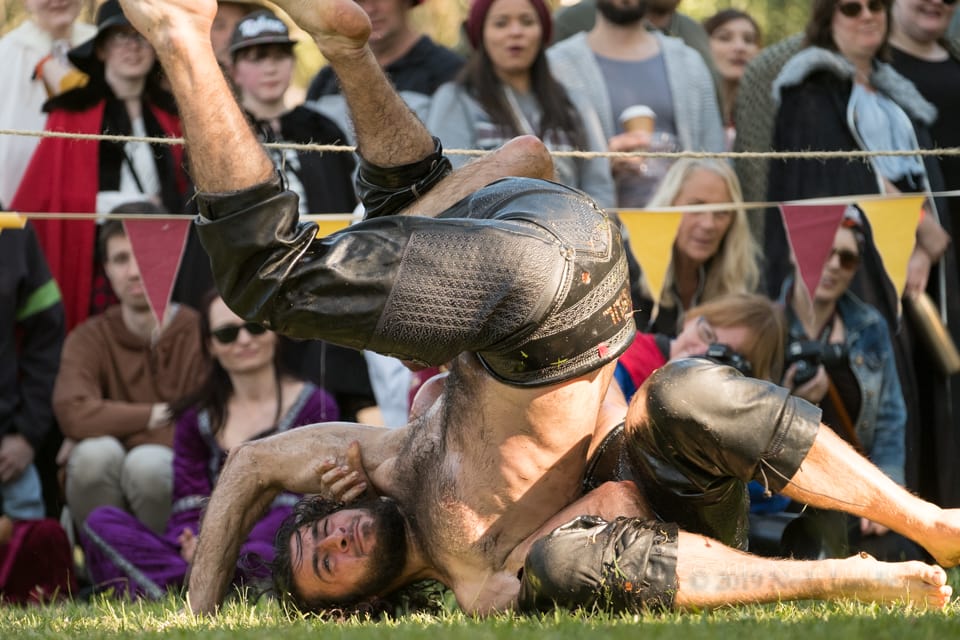 Carried out with traditional rituals and customs of the Ottoman Empire, the Turkish Oil Wrestling has been a star attraction of the Abbey Medieval Festival for over 10 years. The Janissary Barracks take great measures to ensure the authenticity of this great sport of medieval Ottoman Turkish culture, even the tight short leather trousers, called Kispet, are imported from Turkey!

Oil wrestlers from across Australia participate in this competition at the Abbey Medieval Festival.

Trained re-enactors will demonstrate the skills and training required to wield a sword and other weapons in battle.

From the heavy horses used to pull wagons and carry knights into battle, to the smaller and lighter ladies horses, demonstrations of hunting and herding animals like dogs and falcons, farm animals reared for food and pelts, and even the humble bumble bee, which was so important to farmers and for the production of honey and mead.

So many re-enactments! Professional re-enactors will show you how to lay siege to a castle as well as demonstrate what life was like in the different camps. 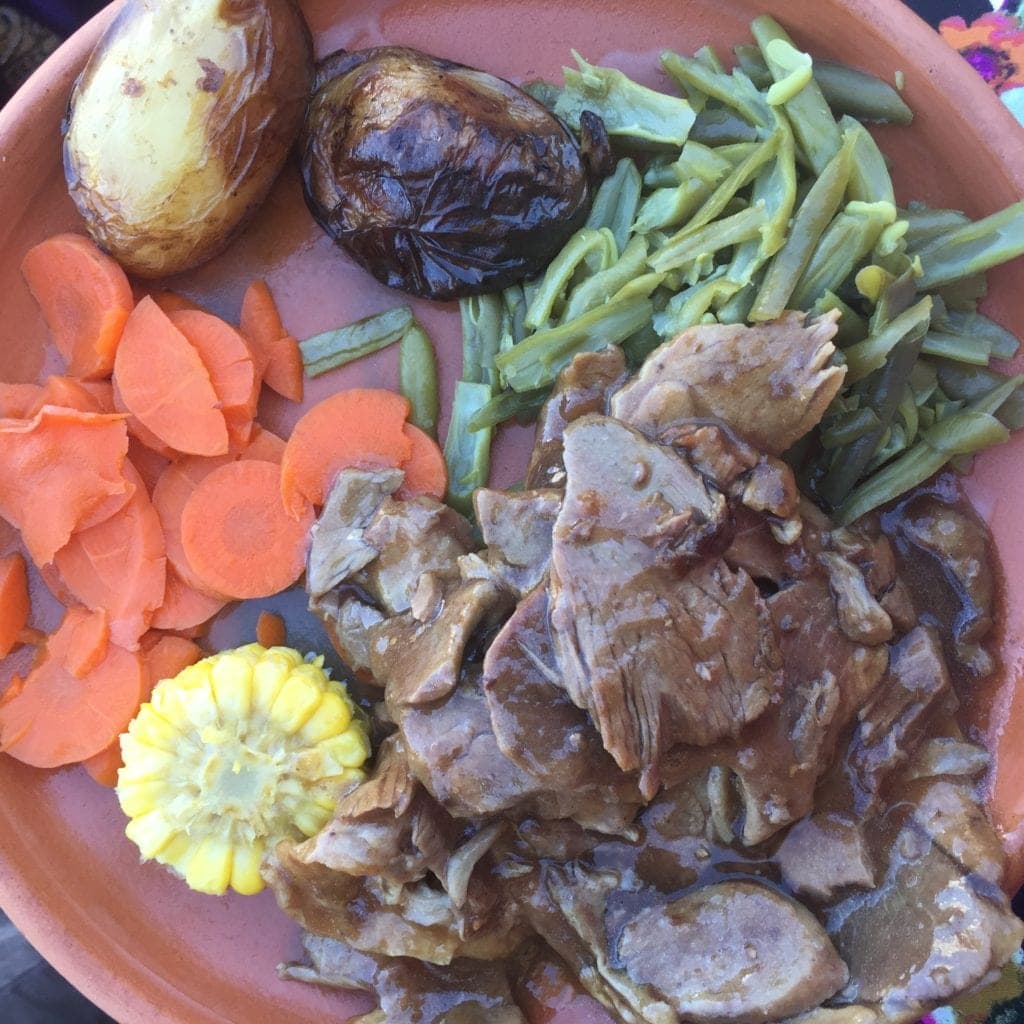 Taste the Middle Ages with traditional food and drinks on offer, including a medieval hog roast, banquets (bookings required), and food stalls selling traditional medieval flavours. If you like your food a little more modern, don’t worry, you’ll be catered for too!

Everything from troupes of belly dancers and gypsy dancers, to roving jugglers, jesters, puppeteers, storytellers, and actors – there’ll be plenty of people willing to entertain your kids! 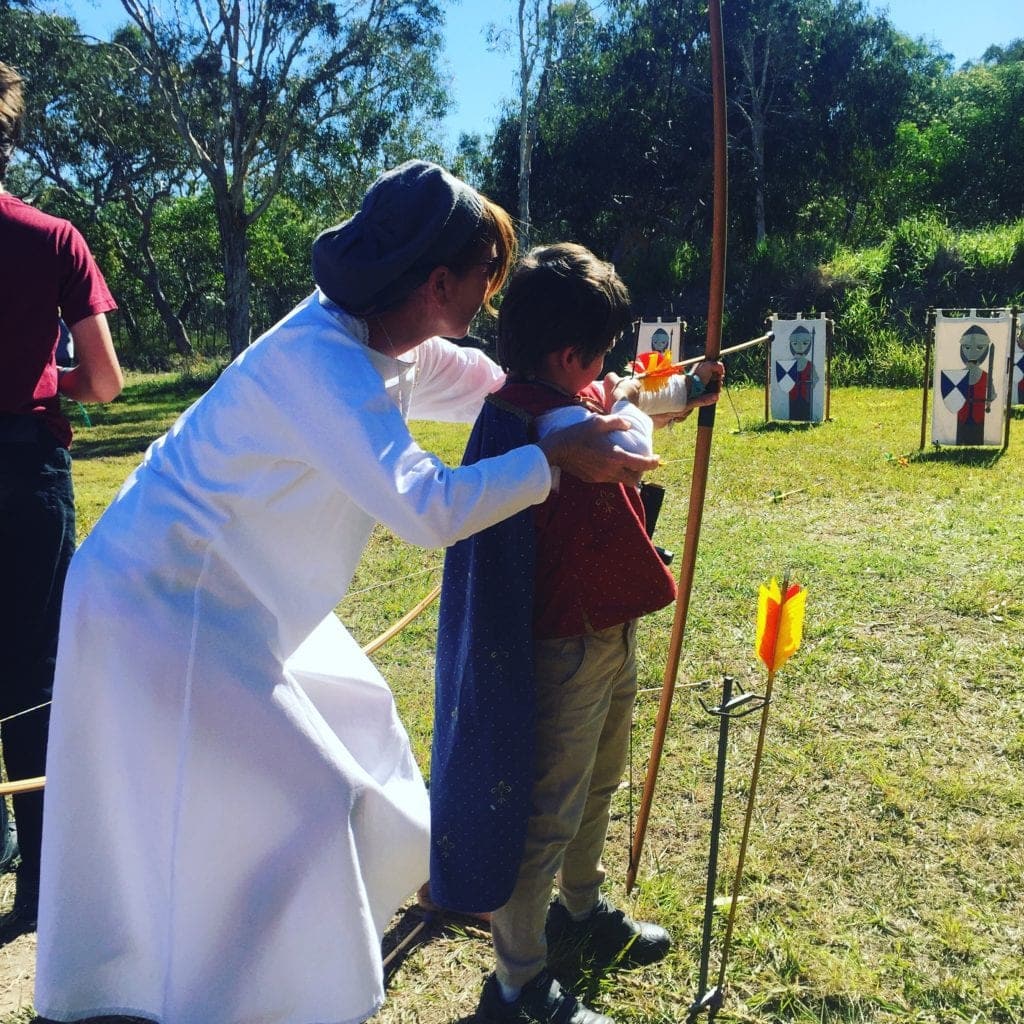 As well as standard ‘aiming-for-the-target archery’, there is also the highly skilled horseback archery and moving target archery. You can even have a go at firing an arrow yourself. 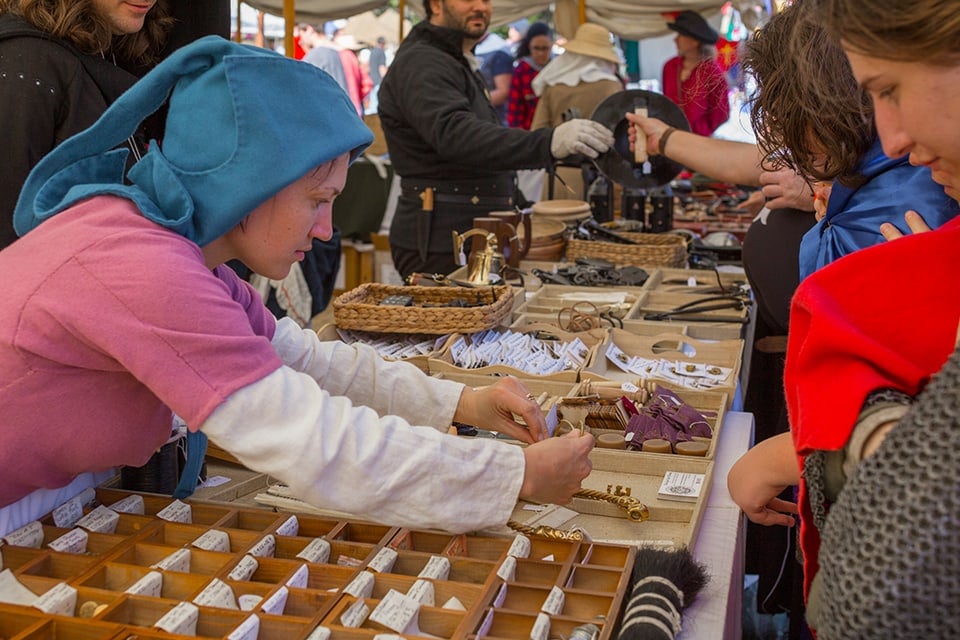 There are lots of stalls to browse for souvenirs and reproduction medieval goods. You’ll find everything from toys and costumes, to sweets, pottery, stained glass, woven goods, leatherwork, jewellery, imitation armoury and weapons, carvings, artwork and a whole lot more. There are around 60 authentic stalls to visit!

Enjoy the historical sounds of the Dark Ages through to the Higher Middle Ages, with Gregorian chants, harpists, lute players, pipes, drums and singers as the musical entertainers stroll through the camps and put on shows. 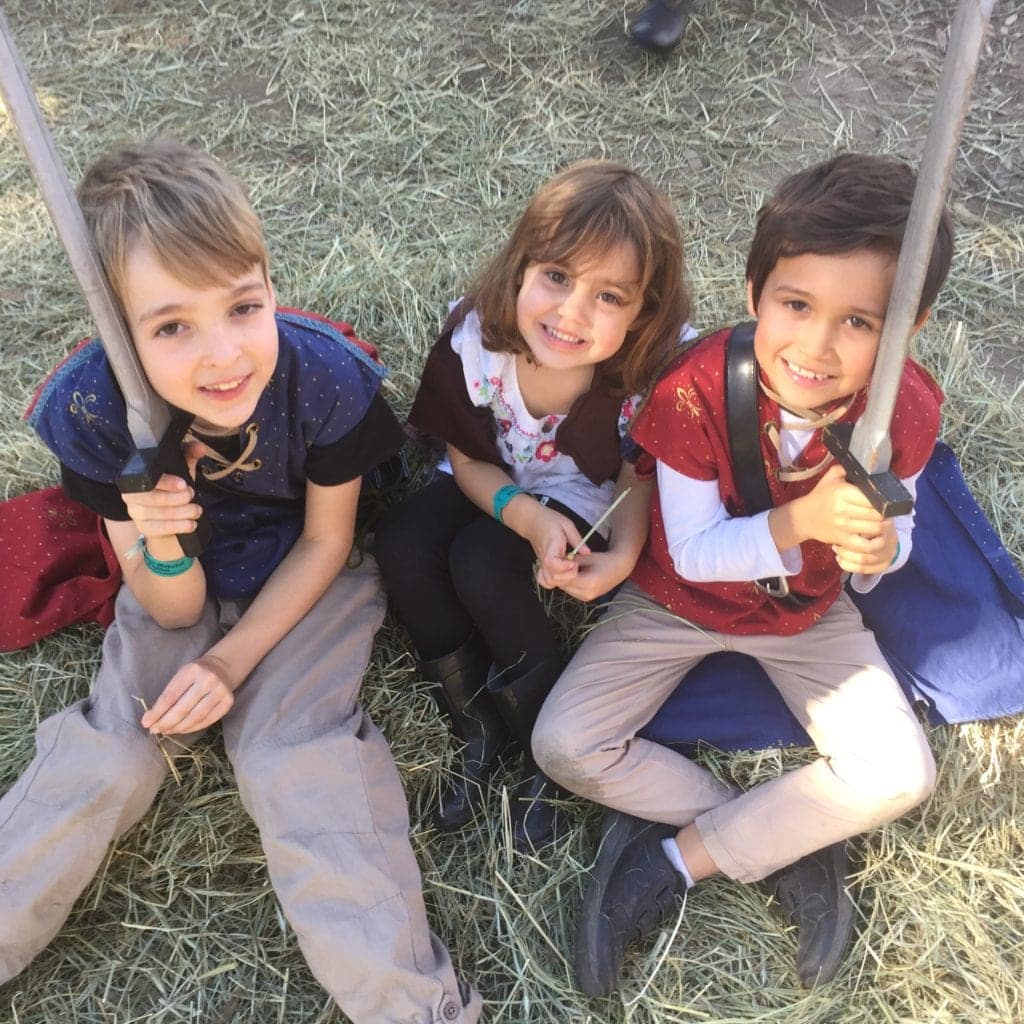 Lots of them, and not just the re-enactors! The Abbey Medieval Festival is the premiere event of its kind in Australia. Re-enactors and participants have beautifully crafted costumes from the medieval period and Dark Ages so you can expect to see peasants in their rough garb, princesses in finely woven silks, knights in full chainmail and plate mail, monks, nuns and Templars in their religious habits, Turks from the time of the Crusades, and characters from traditional medieval festivals relating to the seasons and nature.

Visitors are also encouraged to join in with competitions and prizes for the best fancy dress. Dressing up isn’t compulsory, and you’ll see plenty of visitors in their modern fashions, but if you want to add that extra element of fun to your day there’s no finer excuse to put on your best medieval costume!

How do we get to the Abbey Medieval Festival?

The Abbey Medieval Festival is held at the Abbey Museum of Art and Archaeology, 1-63 The Abbey Place (off Toorbul Point Road), Caboolture.

There is limited free parking on-site, but members of the local fire brigade will be on hand to direct you to other nearby parking spots (a gold-coin donation to the fire brigade is welcome!). Disability parking is available. You can also get there by free bus from the Caboolture Train Station on the Saturday and Sunday. VIP parking is available for VIP ticket holders. The festival itself takes over the expansive space around the Abbey Museum.

However you travel to The Abbey Medieval Festival, we recommend you plan ahead and aim to get there early.

How Do We Get Tickets To The Abbey Medieval Festival?

Early bird tickets are usually available until the end of April, but if you’ve missed out on those you can still save by buying tickets online. You can buy individual or family tickets.

What Else Should We Know About The Abbey Medieval Festival?

There are some restrictions as to what you can and can’t take with you:

Other things to be aware of:

Where can I find out more about the Abbey Medieval Festival?

Go to the Abbey Medieval Festival website for updates.

Making the most of Brisbane Festivals…