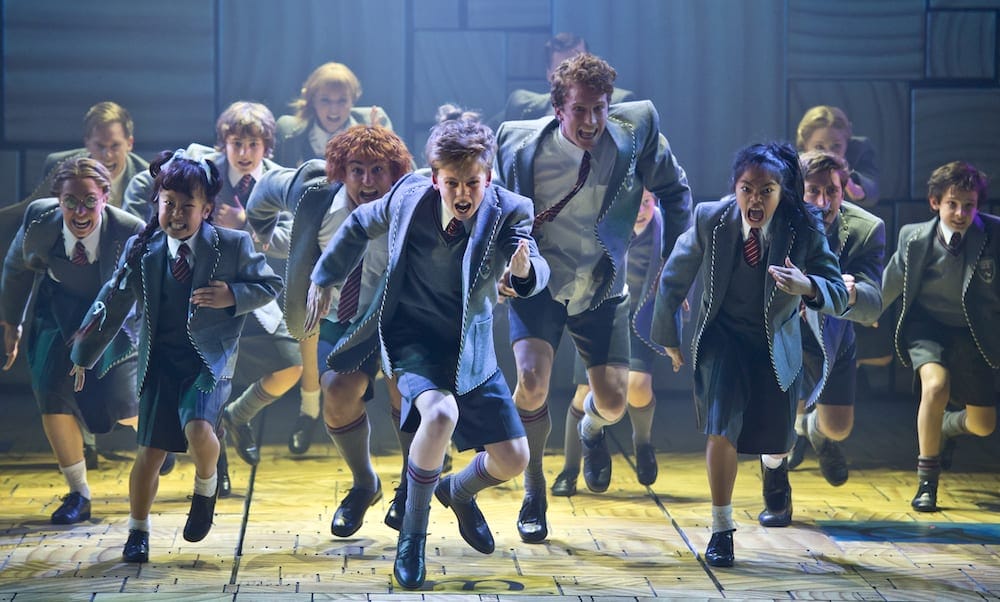 Matilda the Musical, based on the story by Roald Dahl, has been playing at Brisbane’s QPAC since November. If you haven’t yet seen it, here are 10 reasons to snap up some of the remaining tickets before the season ends on 12 March.

The story of Matilda is a classic mix of darkness and triumph. Matilda is a true hero – she uses her cleverness, inner strength and the odd magical power to rise above ignorant and hapless parents and an evil school principal to find happiness with her kind teacher, Miss Honey. The musical has some differences to both Dahl’s book (which won an award shortly after it was first published in 1988) and the 1996 film version (starring Danny DeVito) but stays true in essence to both.

Musical songs are funny beasts and Matilda songs are no exception – out of context they can seem brash and incomprehensible, however combined with a story and staging they are magical. The songs cover a range of musical genres (from cabaret to hip-hop to lyrical to the rhumba) and each one is superb. I guarantee you’ll be singing them as you leave the theatre.

The children who play Matilda and all the other roles are gobstoppingly good. Their acting, singing, dancing and ability to carry the story is astounding. Add in English accents – not to mention Matilda speaking fluent Russian at one point – and you will be in awe.

Tim Minchin, comedian and self-trained musician, exudes his trademark cutting wit into every song. My favourite is his summary of the story of Romeo and Juliet: ‘Love and fate and a touch of stupidity.’ Pure genius.

The front of the stage is covered in scrabble-like letters. They seem random but there are words that can be seen – spotting these entertained us as we waited for the curtain to rise. The rest of the staging is glorious – look out for the giant swings in the song ‘When I grow up’. We were kept guessing about how certain ‘tricks’ were done – like Lavender (one of the children) flying into the air and the all-important chalk writing by itself on the board scene.

Additions to the Matilda story:

A whole subplot – the story of Miss Honey’s parents – has been created to add another layer of story. This story, about an escapologist and an acrobat, forms the basis of some of the most moving scenes of the musical.

A vote for reading:

Matilda is a story that gives heart to kids who love reading and provides unspoken encouragement to those who don’t to pick up a book. Matilda survives her years of being uncared for by escaping to a library and understands the world thanks to the stories she reads. One of the best songs is the most creative take on an alphabet song since Sesame Street.

Each character is brilliantly depicted – the caring but timid Miss Honey, the hammer-throwing champion bully Miss Trunchbull, the rise-up-after-being-put-down Bruce Bogtrotter and the ‘all I know, I learned from telly’ Mr Wormwood. Even minor characters, like the doctor who delivers Matilda and the mafia boss who instantly sees Matilda’s specialness, are well worthy of their stage time.

Matilda the Musical is as much for the adults as the kids:

Matilda is suitable for children, but is not actually a children’s show! In the spirit of animated movies that have in-jokes for the adults, Matilda the Musical is as enjoyable for adults as for kids. The opening scene is a hilarious parody of the lengths adults will go to to get a good photo of their kids, mothers everywhere will equally cringe and laugh at Mrs Wormwood’s take on having given birth and there are lots of parent-feels around the horrors of Matilda and Miss Honey’s early years.

You can sit in the cheap seats:

Though ‘cheap’ is a relative concept when it comes to performances, QPAC is a theatre where you can see well from almost everywhere. Some seats are marked as ‘restricted view’ but even these seats won’t restrict your enjoyment of the show. I sat in the very back row of the theatre ($60/ticket) and could see everything. As a bonus, the seats are comfortable and are wide enough to allow you to more easily see if you end up with a taller person in front.

It won’t end with the curtain:

(This is a bonus 11th reason, as Matilda is a show that is worthy of more than the basics!) My family shared our favourite moments and hotly debated various aspects of the show for weeks. We downloaded the soundtrack and have enjoyed singing along and learning the lyrics. You can watch some clips or a documentary about Tim Minchin and his role in Matilda (sadly it is no longer available to watch for free via iView). You will find lines from the musical making their way into your family life (‘Is it just me or am I amazing?’ is one heard around our house).