What is Kiddle and what do parents need to know?

Kiddle is a new search engine designed to help young children to ‘surf safer’…  But is it worthy of all the hype? We had a Seach Engine Optimiser from www.talkaboutcreative.com.au take a look at how Kiddle works and report back!

Kiddle – it’s a new search engine created especially for little Googlers.  The brainstrust behind Google’s Safe Search got together to launch this Child-friendly way to introduce kids to the internet. So, what do parents need to know about the Kiddle search engine?

Nope.  In fact, Kiddle is bound to become the go -to place for online predators to find kids.  Frankly, nowhere online is 100% safe for kids.   It displays “verified” kid friendly sites highest in search results and blocks keyword searches that are likely to produce “naughty results” but Kiddle is relying on parents to supervise kids, and to educate their computers about what’s safe and what’s not.  What does that mean?  Kiddle will in the future grow its restricted list via feedback from parents.  If your child does come across un-kid-friendly stuff on Kiddle, parents must submit a form or nominate a site – this will, over time help Kiddle better censor its results. 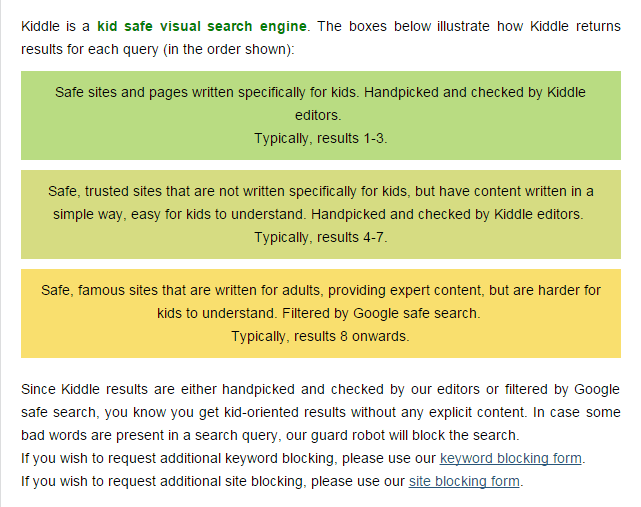 Unlike a search engine for adults, Kiddle also guarantees NOT to collect your child’s identifying information and their search histories are deleted every day.  They do however gather data on site visitation and other stats for data tracking purposes.  While Kiddle explicitly says it’s not a Google company, it’s developed by the Google Safe Search team and allows Google tracking cookies.

Most companies do this because eventually they plan to advertise… so Kiddle might follow Google down the ad serving path.  Kiddle is powered by Google (although technically a stand alone company) so you must opt out of Google Cookies to ensure that Google isn’t gathering deeper information on your child.

Who owns Kiddle seems to be a bit of a mystery wrapped in an enigma.  The ownership information is blocked.  It’s registered via Go Daddy in Arizona but there is no business name registered by the US Securities and Exchange database – nor is the name trademarked in the US.  This in itself is a bit of a worry – generally tech startups seek industry recognition far and wide.

Kiddle is also about usability

Kiddle caters to little fingers and lower reading levels by using images in search results.  The images are “large thumbnails” and give context to the text in the result as kids tend to read much slower than adults.  Kiddle also uses plus sized Arial font.  You’ll see a mix of educational and commercial products in results for kids – Kiddle definitely won’t stop the requests for plastic toys though! 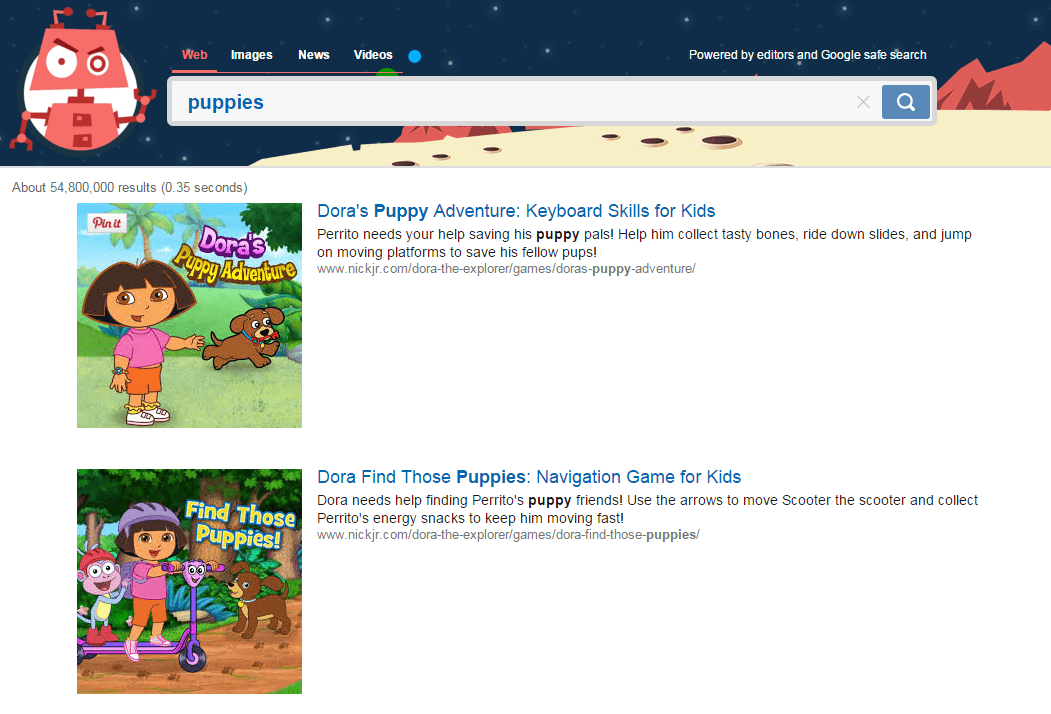 While the obvious keywords are blocked by Kiddle, we took a look at some of the searches young kids may do that could give them access to “bad content”.  Here’s a few problems we found.

Game of Thrones is DEFINITELY not for kids.

The Kiddle results include parent reviews of Game of Thrones, behind the scenes stuff… but not actual imagery of zombie slayings or red weddings.  It did however deliver ENDLESS ads for Game of Thrones games and episode downloads.  The game sites are onto this with brightly coloured ads with audio instructions, making it simple for kids to download and start playing games.  Frankly, this is turned up to eleven compared to regular search results! 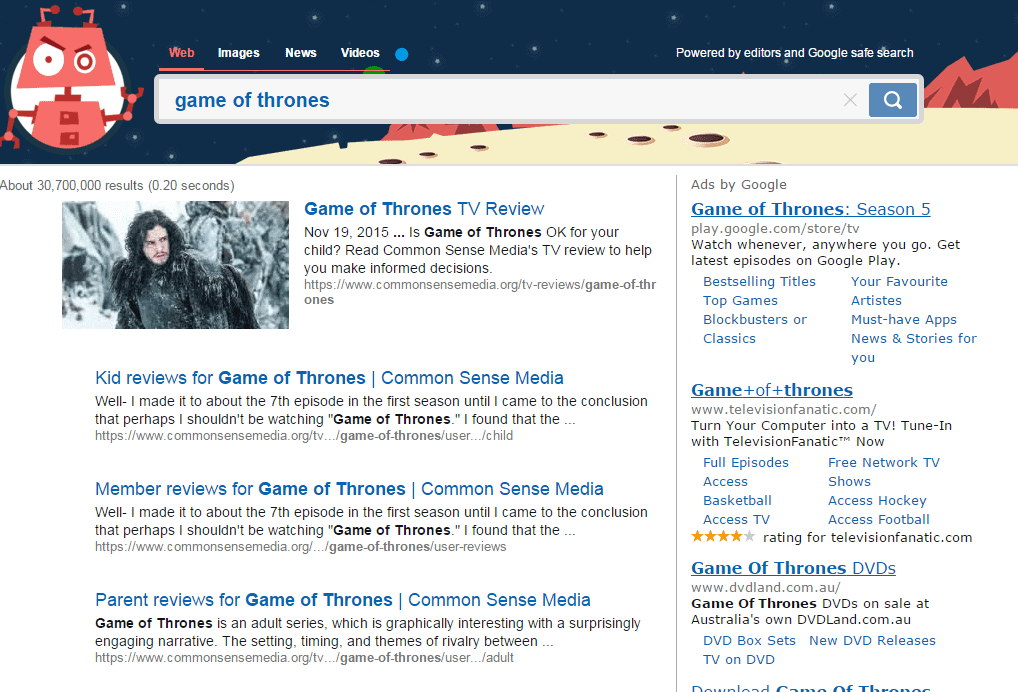 What about real world scary stuff?

Googling a recent news story that would be considered “inappropriate” for young children, I found another issue with Kiddle.  Kiddle blocks out major news sources that could upset kids.  That’s fine.  But in its place, they have served kids with “family friendly” information.  In the case of Cardinal Pell, the details of the case have been suppressed which builds a fairly one-sided story for primary school aged children doing homework research.  When searching Manus Island, I found plenty of information about native snails, reef diving and B&Bs to book when travelling….

Is Kiddle useful or is it dictating what young people read?

For now, Kiddle is probably a better option than Google for very early primary school and pre-school aged children.  The question then becomes how much internet access do these kids actually need – and shouldn’t a parent be doing the navigation for them?  It also blocks Youtube which will likely make it very unpopular among the 3-7 year old set!

For older kids, it will simply make it impossible to do homework and homework is the number one reason kids should be online.  Any other time spent online should be carefully monitored by parents anyway.  So Kiddle is a cool idea and one that will no doubt grow and improve but for now, it’s not the “easy way out” some parents were hoping for!