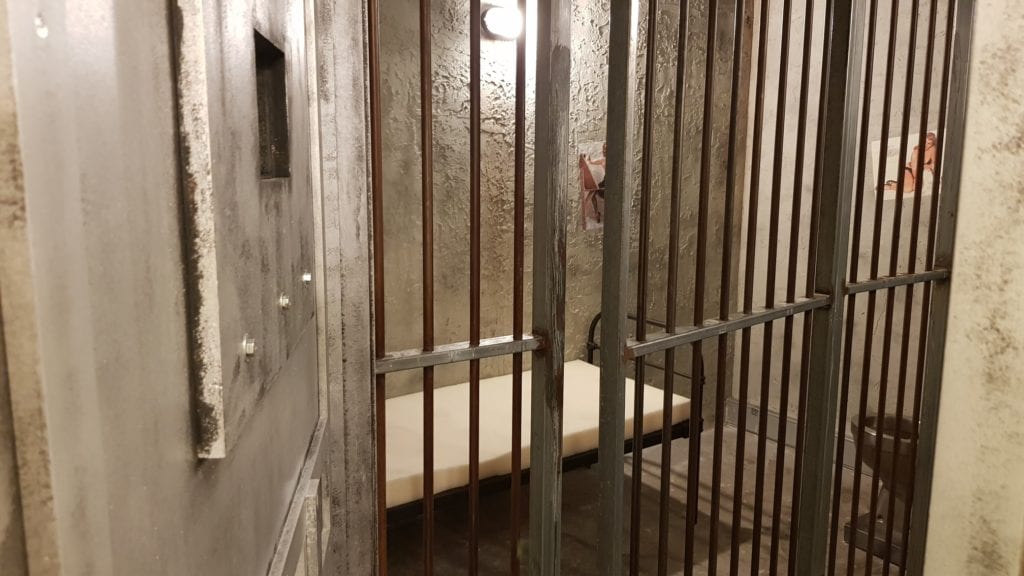 Fox in a Box is on the first floor of 150 Edward Street, Brisbane. The beautiful logo on the wall outside made it easy to spot, and once inside we made our way up in the lift to a spacious waiting room, lined with comfortable sofas and furnished with a selection of coffee table games and puzzles to help you shift your brain into gear.

After soundly thrashing the kids at Connect 4, I was confident the actual escape room would be a breeze!

As a group comprising one adult and three teenagers – all total beginners – we were advised that the Prison Break escape room was a good place to start. “Would you like extra clues added into the room – an option when Children are playing” we were asked. (Clearly our lovely host had not seen how awesome I was at Connect 4!) We bravely declined the extra clues, determined that our combined powers of deduction were more than a match for anything an escape room could throw at us. 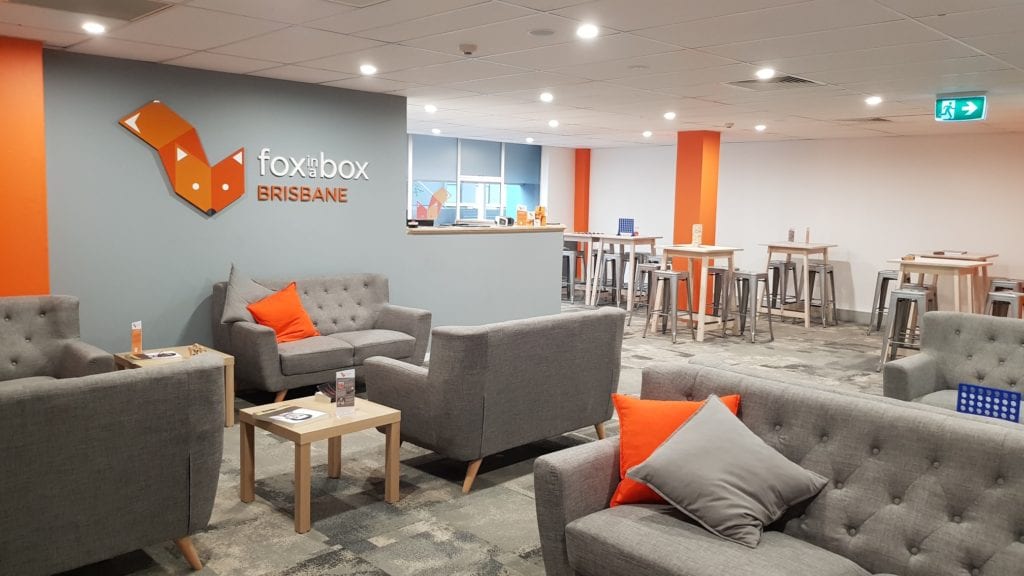 Fox in a Box Reception

Fox in a Box has two prison escape rooms, and another team were going head-to-head with us to see which could escape first. Somehow, while we were stuffing our phones into a locker (no Googling for clues or ‘phoning a friend’ allowed), our lovely host, Gyrae, disappeared and two prison guards marched in to snap us into shape, apprise us of the prison rules, put us in uniforms, and march us off quick-step to our cells. After the cell doors slammed shut (2 inmates to a cell in our room) we were left to our own devices. We had an hour to escape and the clock was ticking…..

OK, I’m not going to give anything away – you need to try this for yourself – but all I can say is we were TERRIBLE! A convenient prison riot broke out and the prison was put into lockdown. The guards rushed off to deal with rioting inmates and while their backs were turned we frantically scrambled for clues or tools to aid us in our escape. We found ‘things’ and pondered over their potential uses, throwing items backwards and forwards between our two cells and poking them into other ‘things’ and fixtures. We knew these random bits and bobs should add up to something, but completely overlooked and dismissed what was our obvious starting point.

Mister 13, very smart boy, said “Mum, ask for a clue”. Mum, not so smart, said “No, we can do this!!” Very stubborn that woman and a born over-thinker! After overthinking for 20 minutes I finally relented and we pushed the buzzer for a clue (normal rules are clues once every 10 minutes if needed but you can also get lots of clues if you want to). Finally we found the starting point that I’d been looking at and ignoring, and we were on a roll.

That clue got us going before once again Mum (seriously, who IS that woman?) began to overthink and progress ground to a halt. Miss 15, very smart girl, said “Mum, ask for a clue”. After 20 minutes of deliberation, Mum relented and pushed the buzzer for a clue. 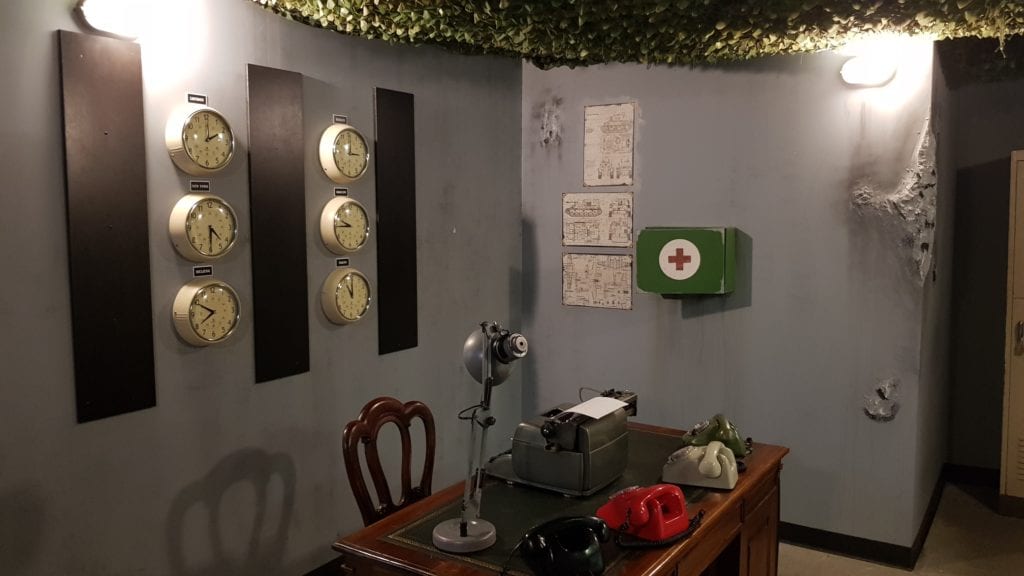 Fox in a Box Bunker

Suffice to say, our time was almost up before we were half way through our escape. As no-one was booked into the room after us, our gracious prison guards (who had got the riot under control by now) offered to add extra time to allow us to finish. We determined that if we got stuck again we would ask for a clue, and finally a cell door swung open – but that wasn’t the end of the experience. I’m not going to reveal what happened next, but there were a few twists and turns in the escape plan and we finally emerged somewhat over 90 minutes after we went in. Did we win the head-to-head? Er, no. All the other teams had finished their various rooms and headed home to dinner.

I thought I was smart, but the kids really surprised me and put me in my place. It turns out they’re far more logical than I am and I should have given more credit to their problem solving skills. On the plus side, I feel confident that if either of my kids should follow a path as a career criminal they’d have the necessary skills to make it home from jail in time for tea.

Oh, the hints and tips! You can choose to have additional clues and tools placed in your room before you enter, especially if you have young children. You can also request hints every 10 minutes or sooner if you need help as the Game Masters are always watching you. If you happen to have a stubborn middle-aged mother in your group, don’t let her think she’s some kind of super hero who could escape from Alcatraz. Tell her to ask for the clues! Hint: that middle aged mother would be me.

The Fox in a Box escape room verdict

Everyone enjoyed the experience and I learnt a valuable lesson; don’t look for difficulties where there are none. Mister 13 enjoyed all the bits apart from the long waits while he sat sighing with the clue buzzer in his hand, and Misses 14 and 15 were thoroughly absorbed in their pursuit of answers to the problems presented – I was really impressed with their hitherto unseen focus. Now, if only I could find a way to channel that focus into keeping their rooms tidy and helping around the house more…

We’d recommend Fox in a Box to…

Anyone who is up for the challenge! Fox in a Box says anyone can play (and children under 7 play for free) but consider your group’s age and their attention span and select your room and difficulty level accordingly.

For older children and teens, Fox in a Box is a great party experience. It’s recommended that no more than six persons be in any one room, but with six rooms on offer you can split your party into groups and the race is on! (See below for more Fox in a Box birthday awesomeness!)

Escape rooms promote team spirit and bonding, which is great for families, and they give players a chance to indulge in an immersive experience in an environment that is very different from home. They require logical thinking, creativity and communication and all members of the family get to express their unique set of skills, making escape rooms the ultimate multi-generational activity.

Other Fox in a Box Escape Rooms

We’ve already discussed the two prison break rooms, but there are four other differently themed rooms on offer for whole new experiences. Rooms can be conveniently booked by selecting a date-and-time block for your chosen room on the website and entering your details.

Can you stop nuclear war breaking out? This military themed room is straight from the early ‘eighties at the peak of the Cold War. A nuclear launch sequence has been started by accident and the whole world is about to end. You are a team of special agents sent to find out who did it and to stop the launch at any cost.

Tesla died in 1943 in the famous New Yorker Hotel’s room 3327. After his death you have received a letter from Nikola Tesla himself. In the letter he asks you to come to his room to find his last invention and share it with mankind before the FBI gets to it, but when you get there the FBI is already on its way. Will you find Tesla’s last invention before the FBI arrive and arrest you for trespassing? (This one is described as probably the most difficult) 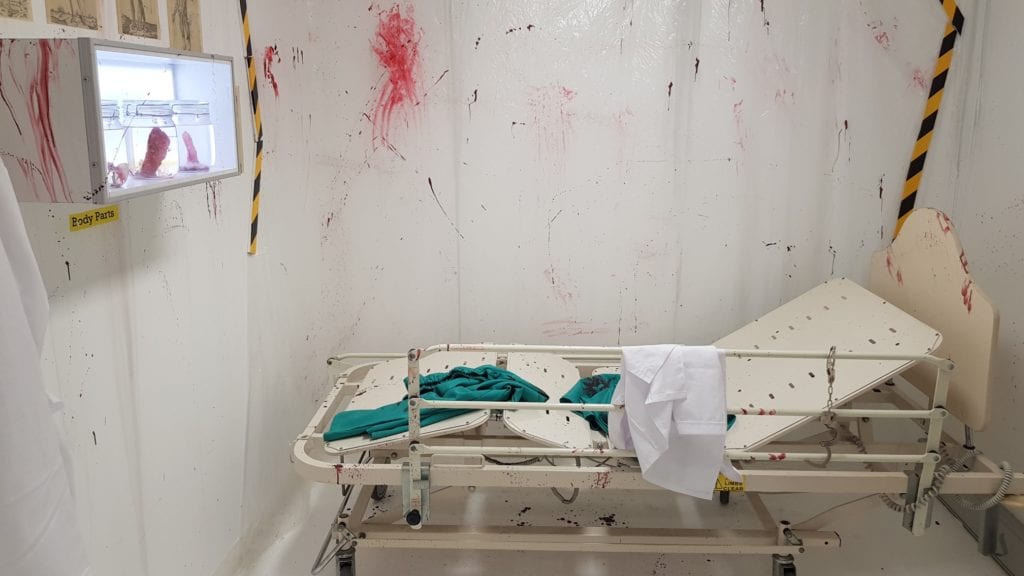 Fox in a Box Zombie Lab

A lethal man-made virus is turning healthy people into bloodthirsty, emotionless zombies. The virus is spread through a single bite. Most of the planet is now infected and humanity is on the brink of extinction. You are a team of scientists who were shipped to Russia to find the cure. You have only 60 minutes to save yourselves and the whole world before the zombies break down the door of the lab and eat you!

Despite the rather gory sound of it, Zombie Lab is considered suitable for children and teenagers, particularly those who aren’t squeamish!

This one is more suited to adults and older teens. I’ll let you go to the website to find out about this particular escape room!

Fox in a Box birthday parties

How about escaping from prison with a birthday cake as well, or saving the world from a nuclear disaster and coming out with presents as a result! Fox in a Box can include special items such as birthday cakes, presents and cards into the role play of the room to make the event even more memorable. The reception area seats 42 between a mixture of lounges and high bar tables and stools. The bar tables and stools can be arranged for a great party area and with prior arrangement you can bring in your own party food and drinks, or Fox in a Box can arrange catering (depending upon the day and time of your booking).

Are we going to go again? Miss 15, although quite charming and cheerful most of the time, is rather a gruesome being and is considering attempting to traumatise her friends with one of the scarier themed escape rooms on her 16th birthday. Although I’d love to join in, I think they’ll escape a lot faster without me.

Getting to Fox in a Box Brisbane

Our escape experience took place on the weekend when parking in the city can be found pretty cheap. I’m a suburban mum and not overly familiar with our city driving, but the Wintergarden Secure Parking was conveniently close by; just a quick five-minute walk.

About Fox in a Box

Fox in a Box Brisbane is part of the international Fox in a Box Escape Room Company whose head office is located in Stockholm, Sweden. The company has developed purpose built escape rooms for BMW Europe, Red Bull Mind Games and The Late Late Show with James Corden to name a few. This is the company’s first location in the Southern Hemisphere and they are extremely excited to open their first flagship Australian location in Brisbane.

Fox in a Box is offering Families Magazine readers 20% off a booking for 2-12 children throughout September/October 2020. Enter or mention code FamiliesMagazine20 when booking to save! All games must be booked and played before 31 October, 2020.

Dino Zoo at The Cube, QUT Brisbane
Gold Coast to Brisbane | Best Gold Coast and Brisbane Attractions
The GoMA Slide is back | For Kids and their Adults to enjoy!
REVIEW: Yarrabilba Playground Buxton Ave | Park in Logan for Families
Tweet
Pin
Share
0 Shares