Home » Moving to Ipswich QLD | All You Need to Know

Moving to Ipswich QLD | All You Need to Know 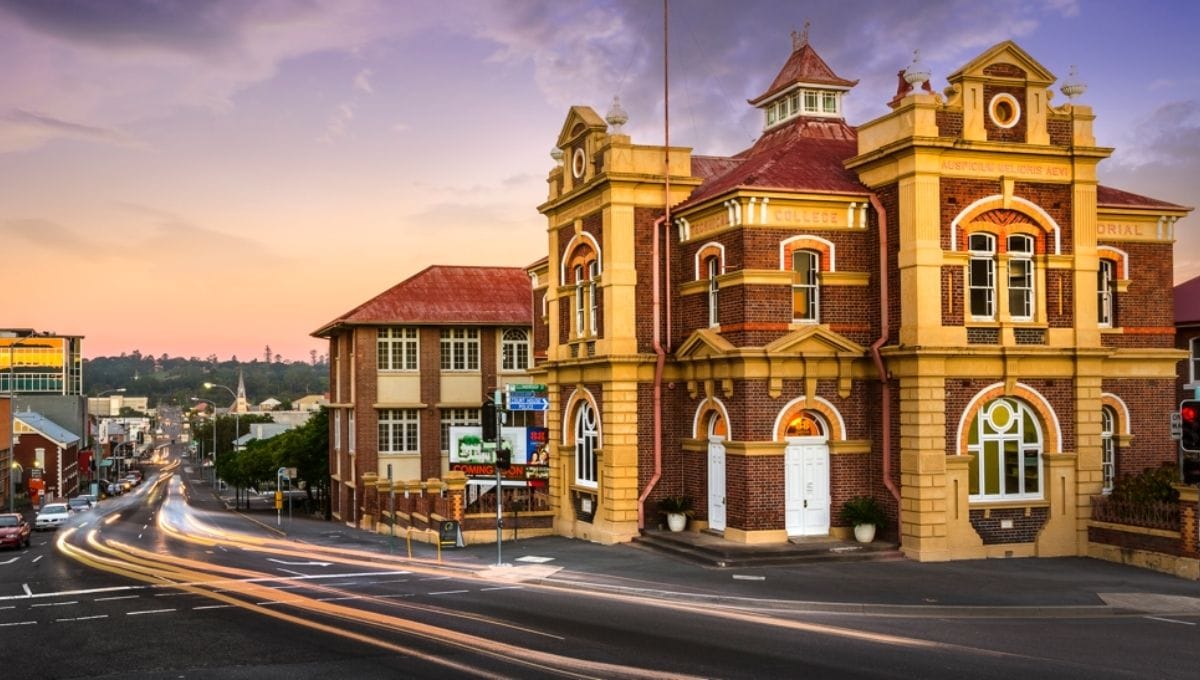 Are you moving to Ipswich in QLD? The city is known and loved for its architectural, natural and cultural heritage. Ipswich is one of Queensland’s oldest provincial cities and it offers affordable housing for families who are looking to move to the Sunshine State.

Best known as the city of stunning Queenslander homes, Ipswich has over 6000 heritage-listed properties.

What makes Ipswich a draw point for many families is its laid back city lifestyle with housing to suit all budgets and a quaint community feel. An emerging café and restaurant culture also allows families to experience dining out. A range of local attractions and parks also makes it a beautiful city to raise a family in.

Ipswich at a glance

Ipswich is located 40km west of Brisbane and is a 40 minute drive from the CBD centre. Commuting between Brisbane and Ipswich is easy with a dedicated train line. Motorways have made travelling by car a simple trip to and from each city.  This distance is great for those Melbournian and Sydneysider families looking to embrace the Queensland lifestyle.

Queens Park is a family favourite for kids, but new developments out at Springfield and Ripley have provided water play parks that have become a popular spot for families to congregate during the warmer months. 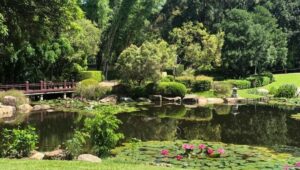 According to the 2016 census, the Ipswich population was 323,069, with the median age being 34 years old. The population is continuing to rise in Ipswich and the western corridor due to developments at Springfield and Ripley.

Economically, Ipswich is known for being a major mining centre for coal. Manufacturing industries have a strong dominance in Ipswich compared to other regional areas of Queensland.

The Royal Australian Air Force has its largest operational base at Amberley, a suburb of Ipswich. A number of Squadrons and ground support units are located at the Amberley RAAF Base.

Life in Ipswich is relaxed and laidback. There is the splendour of architectural buildings over 100 years old to delight the senses as well as a natural landscape for families to enjoy the great outdoors. But while the culture and feel of a city can make it an emotional drawcard for your family to live in, it’s important to check out key and notable statistics about Ipswich.

Heritage listed Queenslander homes will certainly be at a higher price point than the median price in Ipswich. They are a popular choice for home renovators. If you are shopping for a house in Ipswich, expect to find competition from local Brisbane buyers hoping to grab a bargain they can fix up into a forever home. 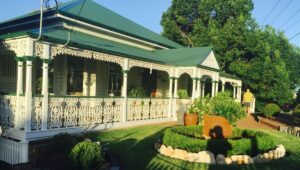 For modern homes, rising development in Spring Mountain, Ripley and Springfield offer new homes which require less maintenance than QLD heritage listed homes. They are further away from the Ipswich city centre but have local amenities requiring less travel.

Of the 84,284 people living in the central city of Ipswich, 65% worked full time and 33% worked part-time.  The largest employment sectors were in health care and social assistance followed by retail trade and manufacturing.

It’s great weather for families to have fun outdoors or in the pool all year round!

Ipswich has a variety of public transport options with buses, taxis, Uber and other rideshare services. Car is the most popular option for travelling around Ipswich. There is also a train line from Brisbane to Ipswich which offers affordable transport to Queensland’s capital city.

Ipswich offers historical and cultural experiences for families. In fact, many of the attractions are much loved by families living in Brisbane, who make the drive for a fun day out with the kids. Moving to Ipswich offers a range of activities to keep kids’ minds and bodies active and entertained.

The Ipswich Art Gallery is one of the most-visited regional art galleries in Australia. It’s a popular attraction for families as it has a dedicated Children’s Gallery and offers a diverse range of exhibitions and programs all year round. Located in the heart of Ipswich city, it’s a must-visit for school holidays or weekends.

Find out more about the Ipswich Art Gallery here. 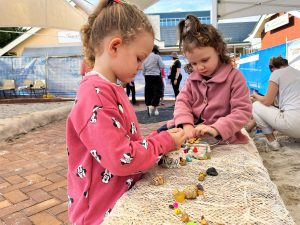 The Ipswich Children’s Library is Australia’s only dedicated public Children’s Library and features heaps of interactive digital experiences your kids are going to love. Its design is sure to turn even the most reluctant reader into a lifelong learner. There’s so much for the kids to do here making it a must-visit.

Read our article on the Ipswich Children’s Library here. 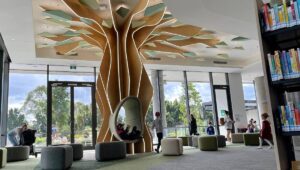 Located in North Ipswich is an award-winning museum which is a must-visit for visitors in the Ipswich region. The Workshops Rail Museum is a heritage listed former railway workshop built from 1878 to 1980s and employed over 3000 railway workers. The museum offers a historical and interactive experience for families sharing the technological breakthroughs of railway works. The museum is often packed during school holidays with its popular Thomas the Tank Engine program.

Read our review on The Workshops Rail Museum here. 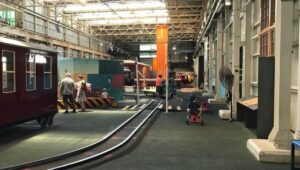 Located in Queens Park, the Ipswich Nature Centre is open six days a week, featuring Australian wildlife, lush landscape gardens and exhibits. It’s free admission, but a gold coin donation helps with care of the animals and allows for future improvements to the Nature Centre. There are playgrounds for kids to climb and explore and a local café offering a range of delights. It’s a popular catch up location for locals.

Read our review of the Ipswich Nature Centre here.

Identified as one of the best parks in the Ipswich region, Robelle Domain is a popular park for families all year round. It can become a packed oasis in summer with its water park and dumping water bucket. It’s an attraction families all over Brisbane and Ipswich drive out to enjoy. 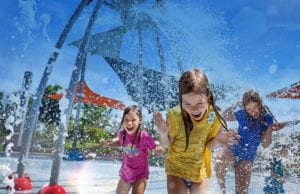 Looking for more things to do with kids in Ipswich? Check out our article here.

Houses for sale in Ipswich for families

Peak Crossing is known for its rural location between Ipswich and the Scenic Rim Regions of Queensland. If acreage is what your family are after near Ipswich, Peak Crossing is the suburb to put on the top of your list. However, pricing is above $1million for these homes, which is double the median house price for Ipswich.

A great suburb for families who wish to remain local to the Ipswich city centre, Silkstone offers quiet streets and a lovely community feel right on the CBD doorstep. Bundamba Creek marks the boundary for this Ipswich suburb, with Silkstone State School marked as a heritage listed state school in the area.

Bordered by Ipswich’s popular Queen’s Park, it is notably landmarked by a small set of shops on the five-ways intersection where Brisbane Road, Queen Victoria Parade, Glebe Road and Chermside road meet. While Newtown doesn’t have its own school, it is ideal for access to Silkstone State School and Bremer State High for secondary school. It’s also characterised by heritage-listed Queenslander homes.

Rosewood is a suburb that offers a mix of modern homes and weatherboard homes. Residents in the area are established families or older couples where children have left the roost. The median house price is $316,250 which makes it an affordable option for families. Rosewood also has its own primary and state school, making it a viable location to raise a family.

Karana Downs has risen in popularity for families looking to reside in Ipswich. The area is distinguished by Mt Crosby and Moggill Conservation Park and is bordered by the Brisbane River.

The median house price is $620,000 with homes on large blocks of land or on acreage offering families a rural experience. The area is a popular spot for families as there are several parks for kids to explore and an 18-hole golf course. Karana Downs also has its own shopping centre.

Public transport is lacking in the Karana Downs area, so many families rely on their car to get around.

The only local school is Mt Crosby State School, with many families opting to send their kids to schools in the Ipswich or Brisbane regions.

Known as the location for the RAAF Base, Australia’s biggest air force base, many families choose to reside in Amberley. While there are no schools in Amberley, the nearest primary schools are in Yamanto and Walloon State School. Bremer State High and Rosewood State High are the most local high schools. The demographics for Amberley include established couples and families and independent youth.

Springfield Lakes is known as a “true home among the gum trees” and has a population of 15,318 people. It is a popular suburb for families due to the close proximity of amenities like shopping centres, parks and schools and of course the stunning lake. It’s nearly a city on its own and was one of the suburbs created within the Greater Springfield Region.

There are a number of public and private schools in the region of Springfield including Springfield Lakes State School and Good Shepherd Catholic Primary for primary-aged students. High schools include Springfield Central State High School, Woodcrest State College and St Peters Lutheran College.

Houses are modern and some are recent builds due to the age of the development. The median house price is $480,000 for the area and it is a popular choice for young families.

For families wanting to build a new home, Ripley is the suburb to look at. There is a mix of older homes and newer homes with farm land developed into blocks for families to build their dream home.

There are large outdoor parks in the newly developed sections of Ripley, making it a great investment for families. The local community feel and ease to amenities makes it a popular choice for families looking to live in the Ipswich area. Both a state primary and secondary school are located in South Ripley.

Why you should move to Ipswich

Families living in Ipswich will tell you it’s the best city to live in and raise children due to the strong cultural and community feel of the city. It’s a mixed suburban and metropolitan delight which brings the best of both worlds together for a peaceful and enjoyable lifestyle.

Raising a family with so many attractions and rich history on your doorstep, your kids will grow up with childhood memories they will treasure into adulthood.

Thinking about other parts of South East Queensland? Read our guides.