Home » What Parents Had to Say About Kids and Mobile Phones

What Parents Had to Say About Kids and Mobile Phones 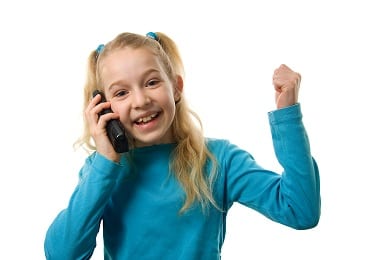 Recently, Families Magazine called out to Brisbane parents to help a fellow Mum decide whether or not to give her 11 year old son a smartphone. Dozens of parents responded with advice based on their own experience of dealing with this very issue.

One thing was immediately apparent from the range of opinions on the subject: There isn’t  an off-the-rack, one-size-fits-all solution. The subject of kids and phones is a divisive one. Just over 50% of mums who answered the call for advice were in favour of getting their child a phone. They pointed to their child’s safety and their own peace of mind as being the primary factor affecting their decision.

Many also saw the educational benefits of introducing their child to technology at an early age. However, that’s not to say that all those in favour of phones would buy their child a smartphone. Many indicated that they preferred a ‘basic’ phone or an ‘old’ phone instead. This was directly as a result of their concerns that smartphone would effectively open a Pandora’s box of problems for their child.

Of those who indicated that they would give their child a smartphone, they prefaced it by saying they would actively take steps to protect their child. This included setting up data restrictions, closely supervising the use of the phone and outlawing all social media use.

Facebook was a big concern, as were apps such as Snapchat, Kik and Messenger. The rise of sexting (where children send and receive naked images) has become a huge concern for parents. If your child engages (even consensually) in sexting or other online sexual activity, they may inadvertently be committing a crime; the creation and dissemination of child pornography.

This could result in a Children’s Court appearance and their being placed on a Sex Offender Register. In some jurisdictions, the legislative reaction to counteract this has been swift. Other jurisdictions are yet to take up the challenge.

Read more here about how some other states have changed their laws to decriminalise sexting between minors.

Some parents voiced a concern that their child would be exposed to online predators and cyber bullies. One Mum succinctly wrote ‘phones are dangerous…Predators can easily track kids on phones’. She certainly isn’t alone in her concerns.

In 2007 two men were charged with the murder of 15 year old Adelaide teen, Carly Ryan. She had met her killers on Facebook. Over recent years, significant amounts of government funding have been directed towards educating kids and their parents as to the dangers associated with going online. Learn more here and here about protecting your child from cyber bullying and online predators:

Some parents seemingly accepted the inevitability of their child getting a phone. However, they were adamant that they would delay it as long as possible. They were of the view that they would wait until their child would be more mature and hopefully better placed to deal with the responsibility and cost of having a phone.

For many in this category, the transition from Primary to Secondary school was the point in time at which they would consider getting their child a phone. They pointed to the fact that their child would be more reliant on public transport to get to and from school, so their child’s ability to contact them in an emergency was crucial.

Some parents even expressed that they would delay giving their child a phone until such a time as they could contribute financially to its ongoing costs. One such Mum wrote ‘my husband and I agree that our kids will need to save and pay for their own phone. It will ensure that they have more respect and responsibility for it and they will pay the credit.

One-fifth of parents who responded said they would not give their child a phone at all. For some, it was purely an issue of insurmountable cost. Many cited the fact that they were already at breaking point financially. They saw no way of meeting the additional financial burden of a buying a handset, let alone its ongoing costs.

Many voiced concerns as to the fragility of many popular smartphones (iPhones in particular) and the risk of loss or breakage. For others, they saw no need for their child to have a phone as they had grown up without one and it hadn’t adversely affected them.

Many questioned whether getting a phone, in particular a smartphone, would stifle their child’s individuality. One Mum was adamant that she would refuse to bow to pressure to give her child a mobile phone, saying ‘kids need to toughen up and be individual’.

Others pointed to the fact that smartphones are a much sought-after commodity on the black market. Having a smartphone could potentially make your child a victim of a crime. Surprisingly, not a single parent voiced that their decision had been influenced by a perceived link between mobile phone usage and increased rates of brain cancer. Read more about this issue here.

The diverse range of opinions on the subject of kids and mobile phones just serves to highlight the fact that technology is advancing at a speed that simply beggars belief. Yes, there are a multitude of benefits, educational and otherwise, associated with your child having a mobile phone. But, equally, there are many pitfalls for the unwary.

Protecting your child from the pitfalls associated with mobile phones