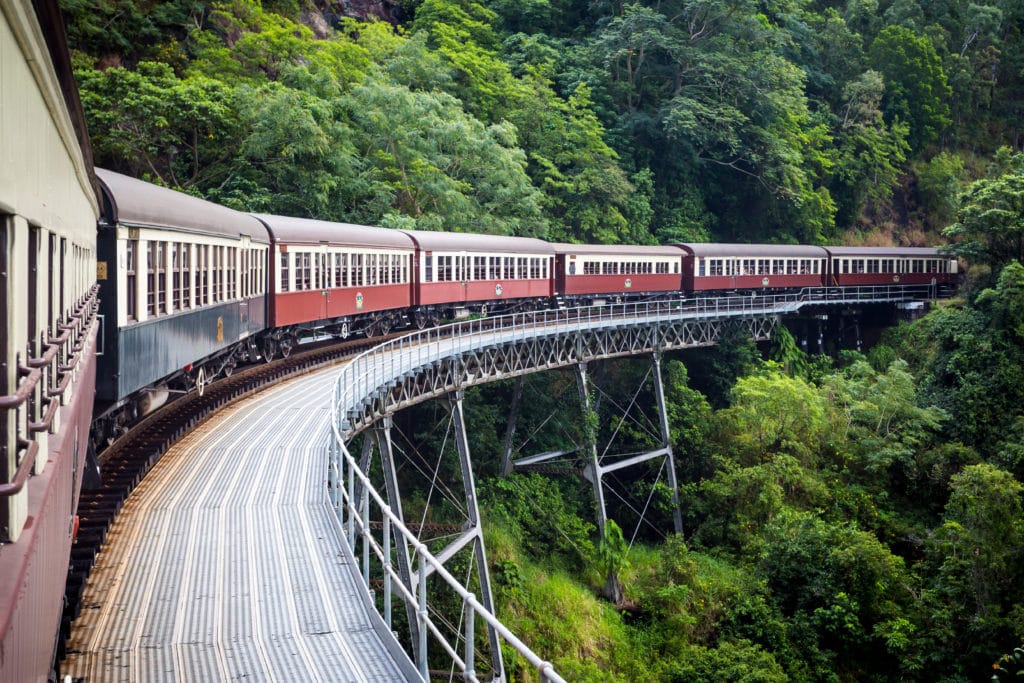 Watching people, clouds, and birds pass your window is only entertaining for so long. After a while, a change to your limited, self-quarantined reality may be necessary. And while you can virtually visit museums and even take the kids on virtual field trips from your sofa, they’ve got nothing on a brisk train ride through the Swiss countryside or a journey through the tropical rainforests of Australia.

Virtual train rides offer viewers the chance to zone out and calm the mind, while seeing new landscapes, some of which many people will never experience in real life, quarantine or not. Plus, you don’t have to worry about train fare or if the onboard amenities are up to par — just pour yourself (I mean the kids) a mug of hot chocolate and hop aboard.

Widely considered to be one of the most beautiful train journeys in the world, this 12-mile train route takes you from the end of Aurlandsfjord, a tributary of the Sognefjord, up to the high mountains at Myrdal station. Along the way, you’ll pass waterfalls, deep ravines, snow-capped mountains, and high-altitude farms, all while watching the weather shift from sun to rain.

You can get a taste of the Japanese countryside as you travel virtually from Hiroshima Station to Fuchū Station on the Geibi Line turned Fukuen Line. The route passes through the mountainous area of the Chūgoku region, so expect to see stunning bridges and long, dark tunnels cutting through mountains.

This famous railway winds its way on a journey from Cairns to Kuranda. The journey to Kuranda takes approximately 2 hours, which includes a 10-minute stop at the spectacular Barron Falls Station for a bird’s eye view of the Barron Falls. Passing through 15 hand carved tunnels, 37 bridges, spectacular waterfalls and into the stunning Barron Gorge. 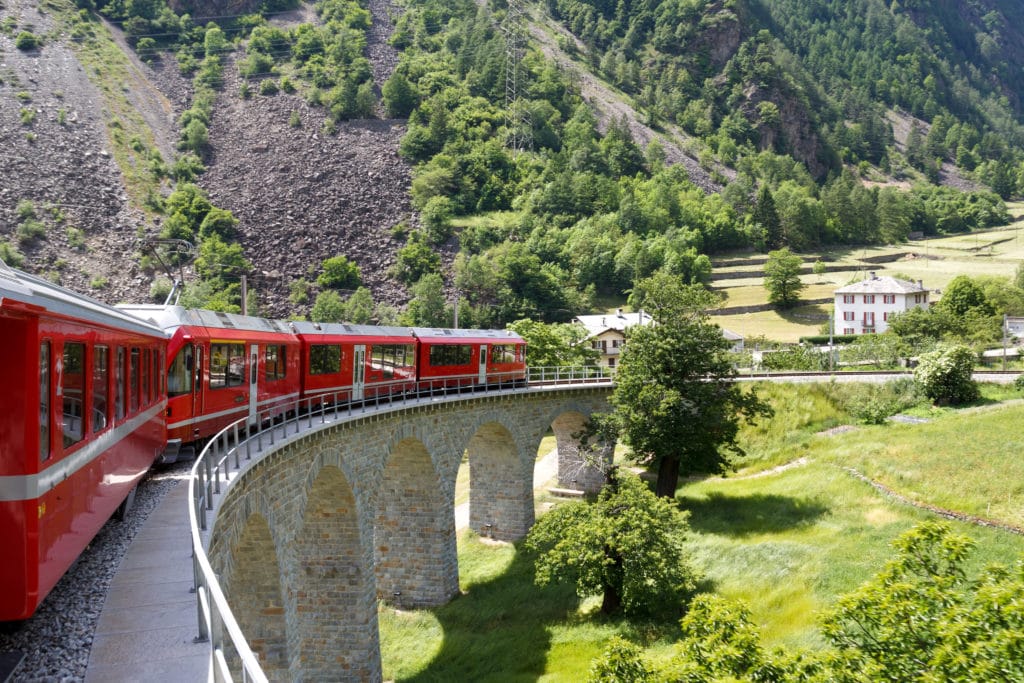 The trip starts in St. Moritz, Switzerland on a perfectly sunny day and ends in Tirano, Italy via the high-mountain Bernina Pass. Sit back with an Italian-style caffè and watch as the train cuts through picturesque villages and rumbles alongside dizzying cliffs and sparkling blue waters.

Along the way, you’ll break a few records — albeit virtually: It is the highest railway alpine crossing in Europe and the highest adhesion railway on the continent. Not bad for a fully virtual experience. 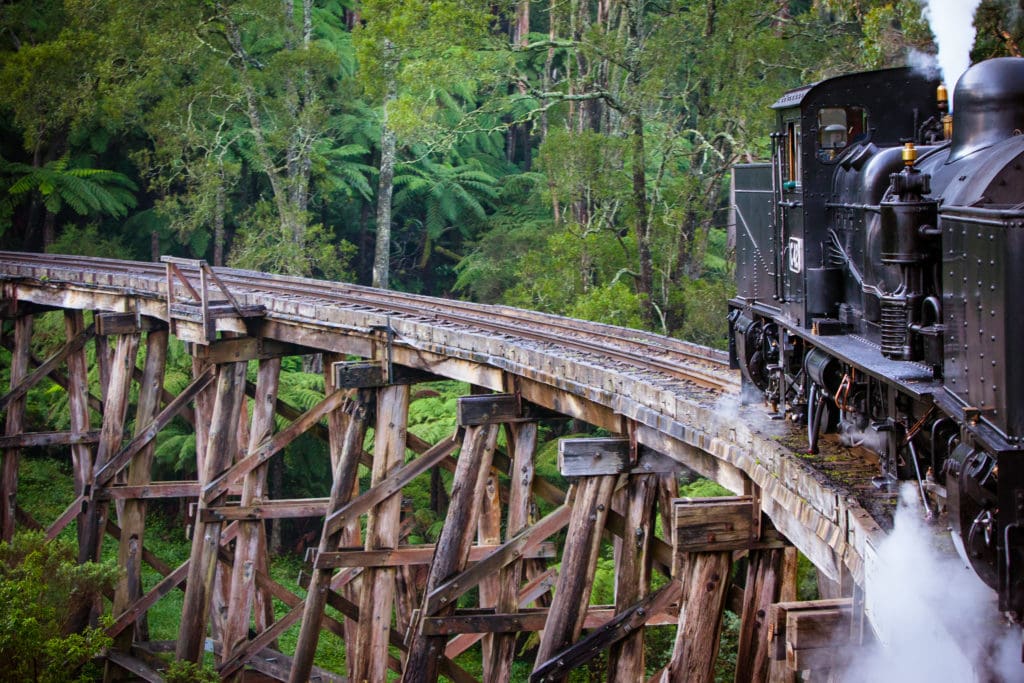 This video gives viewers the opportunity to experience an uninterrupted forward driver’s-eye view of this fascinating railway from Lakeside to Gembrook as it passes neat houses, open countryside and the beautiful Wright Forest with its towering Eucalyptus trees and Jurassic ferns.

If you’ve ever dreamed of making it to the top of Colorado’s Pikes Peak, which sits 14,115 feet above sea level, here’s your chance. Hop aboard North America’s highest train and join this fast-motion virtual tour. The trip starts at the station in Manitou Springs and climbs the well-known peak in a matter of minutes, allowing the viewer to sit back and enjoy the dizzying ride.

You’ll start your journey in the town of Bar, near the Adriatic Sea, before passing through the line’s longest tunnel (20,246 feet) and over the highest railway bridge in Europe. After zipping through the country’s impressive mountainous region, end the virtual trip in the town of Bijelo Polje — 102 tunnels and 96 bridges later.

Travel along the beautiful Wales coast aboard a British Rail Class 175, a type of diesel passenger train used in the United Kingdom. The virtual excursion kicks off in the city of Chester, England and quickly travels over the border into Wales, passing through lush countryside before hitting the coast and continuing west.

The adventure starts on the Trondheim Fjord in Trondheim and only seems to get snowier as you head farther north. Eventually, you virtually pass into the Arctic Circle before ending in the municipality of Fauske. If cold and snow don’t sound appealing, you can experience the trip in one of the other three seasons by Googling the nae of the train line!

Often considered to be one of the world’s most scenic railroads, the Ferrocarril Central Andino links the Pacific port of Callao and the capital city of Lima with Huancayo and Cerro de Pasco. This four-part virtual journey begins in Chosica and ends near the Galera railway station in the Andes.

In part one, you’ll traverse the massive Puente Carrión bridge; part two climbs from Matucana to San Mateo, one of the most scenic parts of the line; part three takes travelers over the Puente Infiernillo bridge, which passes through a tight canyon with high rock walls on either side; and finally, part four lets you travel virtually through one of the world’s highest railroad tunnels.

If you have been to New York City, you will know that the subway is a fascinating and fast paced transporation system. In this web cam view, the 7 Express Line (Flushing Express) travels from Queens to Manhattan, providing outside and underground views along the way. And if you’re into trains, keep in mind that this footage was shot on one of the line’s R62A trains, which have since been returned to the 6 train.

You can explore the Balkan country of Bosnia and Herzegovina by train, thanks to this virtual cab-view video. Starting in Čapljina, you’ll dip into Croatia quickly before crossing the border back into Bosnia and Herzegovina and ending your trip in the country’s capital, Sarajevo. A good portion of the journey follows the Neretva River and passes through tight, mountainous terrain and over the Bradina Pass.

You’ll start your virtual journey on the London Underground at London Waterloo station and then head west, eventually dropping south toward Southampton and ending at Southampton Central station. Along the way, you’ll see the London skyline before moving into the vibrant, green countryside.

This historic line takes travelers from one mountain town to another, traveling over a high-alpine mountain pass to get there. This three-part tour offers guests a virtual ride on the three-foot-wide narrow-gauge heritage railroad as it traverses over 45 miles between Durango and Silverton.

During part one, enjoy the breathtaking journey along a narrow ledge cut into a sheer cliff face far above the Animas River; in part two, the train chugs high up into the Colorado mountains; and in part three, it heads down the mountain pass into the Wild West town of Silverton.

Enjoy a perfectly clear driver’s-eye view of the stunning route from Lauterbrunnen to Kleine Scheidegg. You’ll virtually cross pretty Swiss villages and tree-covered slopes as you climb up into the mountains, eventually passing views of snow-covered mountains and deep valleys.

We could not create a list of virtual train rides for kids without including our all time favourite kids train, Thomas!! If you have ever wondered what the Engine Driver does on a train, this virtual train ride is for you (I mean your kids)!