Dingo Facts for Kids: Learn About Wild Dogs in Australia 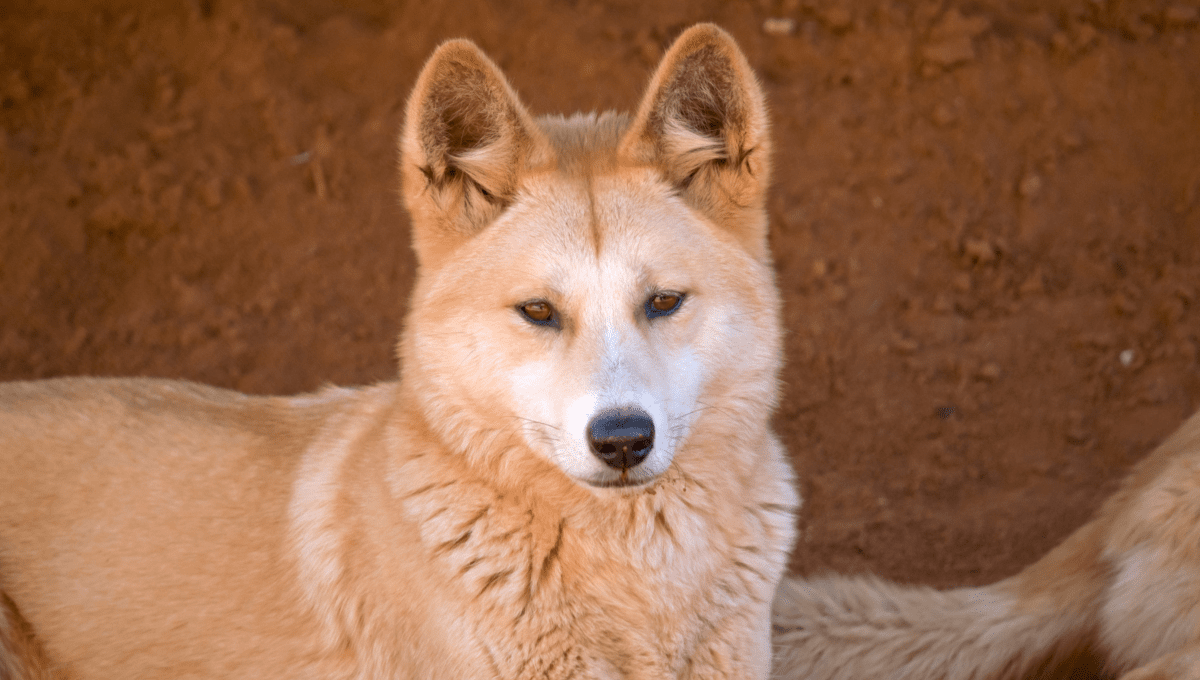 Looking for some great dingo facts for kids? Whether you’re doing research for a school presentation or you just love learning about Australia’s animals, this post about interesting dingo facts will tell you everything you need to know and more about dingoes!

Facts about the dingo

The dingo dog breed is a type of wild dog that can be found in Australia and parts of Asia.

When you think of dingoes, you might imagine a dingo on the beach of Fraser Island in Queensland where their tan-coloured fur blends into the natural sandy landscape. This is the iconic image of a dingo living in a protected environment.  Dingoes live in lots of other locations around Australia, too.

Read on to enjoy these interesting facts about dingoes… 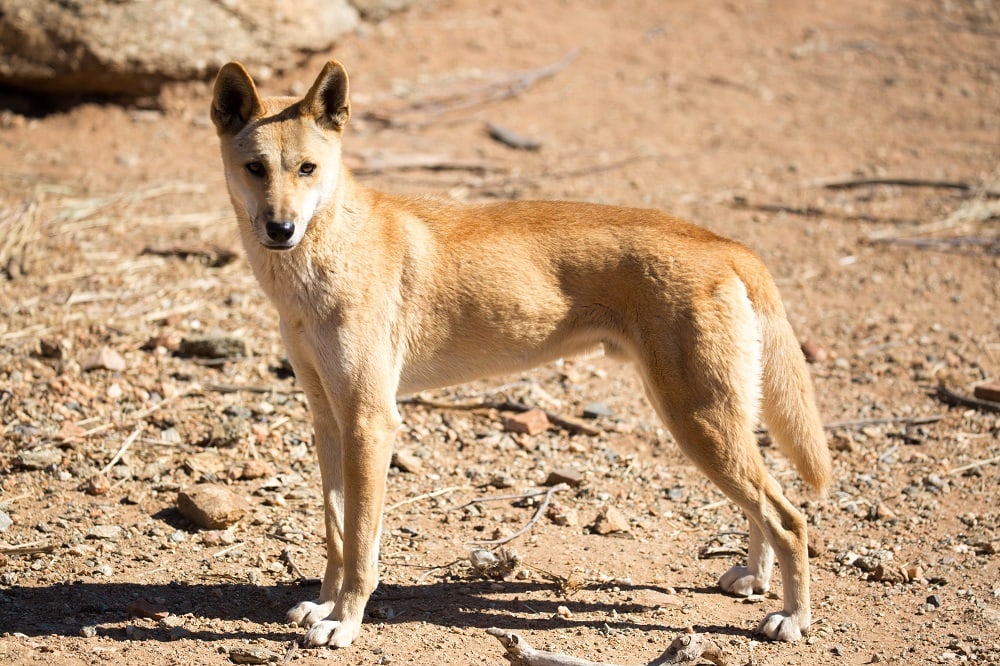 Here are some quick-fire dingo facts for kids to get you started:

Questions about these wild dogs in Australia

Do dingoes live in packs?

Dingoes are mammals that live with up to 12 dogs in groups called packs (although some male dingoes choose to live solitary lives).

There is a hierarchy in the dingo packs. The packs have a similar social structure to wolf packs where they’re led by a dominant male and female.

The order of ranking in the dingo pack is determined by their aggressive behaviour with the most dominant dingo being the leader of the pack. This means dingoes don’t all lead an equal life – some lower down the pecking order lead a more challenging life where they get access to less food. The pack is important though both for the social element and for safety.

What do dingoes look like? How big is a dingo?

Dingos are medium-sized wild dogs and their colouring reflects the landscape where they live so they can blend into the natural environment.

Dingoes come in a range of different colours. They can have orange, red, tan, black or white coloured fur.

Most dingoes have white markings on their paws which look a bit like socks. They also often have white tips on their tails and on their chests. These different markings help identify them.

Australia’s largest carnivore has pointed ears (important for hearing what is going on all around them and for communicating) and a long muzzle. Although they look a lot like dogs, dingoes have a lot more in common with wolves than dogs.

Are dingoes native to Australia?

The Queensland Museum has found the origins of dingoes can be traced right back to a South Asian variety of grey wolf. While the oldest archaeological proof confirms their arrival in Australia over 3500 years ago, other studies suggest they may have been in Australia for much, much longer than this. There is still a lot to learn about the history of the dingo.

Now, dingoes are considered to be native to Australia and they can be found across much of mainland Australia.

Dingo habitat: Where do dingoes live?

The dingo habitat varies across mainland Australia. Some live in deserts, forests, mountains and grassland. Dingoes are an adaptable species but they prefer to live in the cover of woodland and areas beside forests for shelter and access to food and water.

Dingo packs tend to stick to a particular territory and they leave their scent around to mark their territory.

Dingo diet: What do dingoes eat?

Dingoes are carnivores, often eating rodents, kangaroos, wombats and wallabies. They will also eat lizards and fish, and they even eat fruit, nuts and grains occasionally.

Dingoes are opportunistic creatures that will scavenge for food. If they hunt for larger animals, such as water buffalo or kangaroos, they do so in their packs or by forming a group with other lone dingoes so they can work together.

There have been cases with dingoes harming humans (mainly children due to their size being less intimidating to them) although these cases are rare. Again, this reinforces their opportunistic nature when it comes to hunting.

How long do dingoes live?

Can dingoes be pets?

Dingoes don’t make good pets. They are wild dogs and don’t behave like domesticated dogs. There are lots of regulations around keeping a dingo as a pet and it varies across states and territories.

Dingoes are wild animals and should remain wild and appreciated from a distance.

What sound do dingoes make?

A dingo doesn’t bark like a dog. Instead, they make a dingo howl sound like a wolf, or they can make a short, harsher barking sound occasionally. Howling is their way of communicating with the pack or warding off intruders.

What about dingo babies?

Dingoes are thought to be monogamous animals which means once they find a partner, they mate and stay together for life.

A female dingo breeds once a year between March and June. The gestation period for dingo babies is around nine weeks.

The female dingo gives birth to her dingo pups in a cave or cosy shelter or burrow. Between four and six dingo puppies will be born and they feed milk from their mum for their first two months in the world.

Usually only the dominant male dingo in the pack will get the chance to breed. The other males will provide protection of the den and feeding duties and they support the dingo pups as they start living with the pack. At the age of between three and four months old, the dingo puppies begin hunting and learning the important rules of the pack.

A female dingo can be aggressive when her pups arrive – she wants her puppies to survive and will do what it takes to protect them from any danger. It’s especially important to avoid coming close to dingoes during this time.

What is the cultural significance of dingoes?

Dingoes hold a strong cultural significance to Aboriginal and Torres Strait Islander communities and they feature prominently in Aboriginal mythology.

Dingoes are believed to live in the physical and spiritual realms, and as such they were used as guardians for camps due to their ability to identify evil that can’t be seen by the human eye.

In traditional Aboriginal society, dingo puppies were taken from their mums and semi-tamed. Dingoes not only provided protection for women and children, but they gave warmth as they were a living fur blanket.

Dingoes have a natural ability to find water so this was a useful skill that has been well-documented.

It was the arrival of the First Fleet bringing with it sheep and livestock that issues began to arise. With no fencing to secure the animals, they were vulnerable to dingo attacks thus began measures to eradicate dingoes because of the threat they posed to the animals.

Are dingoes endangered and what is being done to protect dingoes? 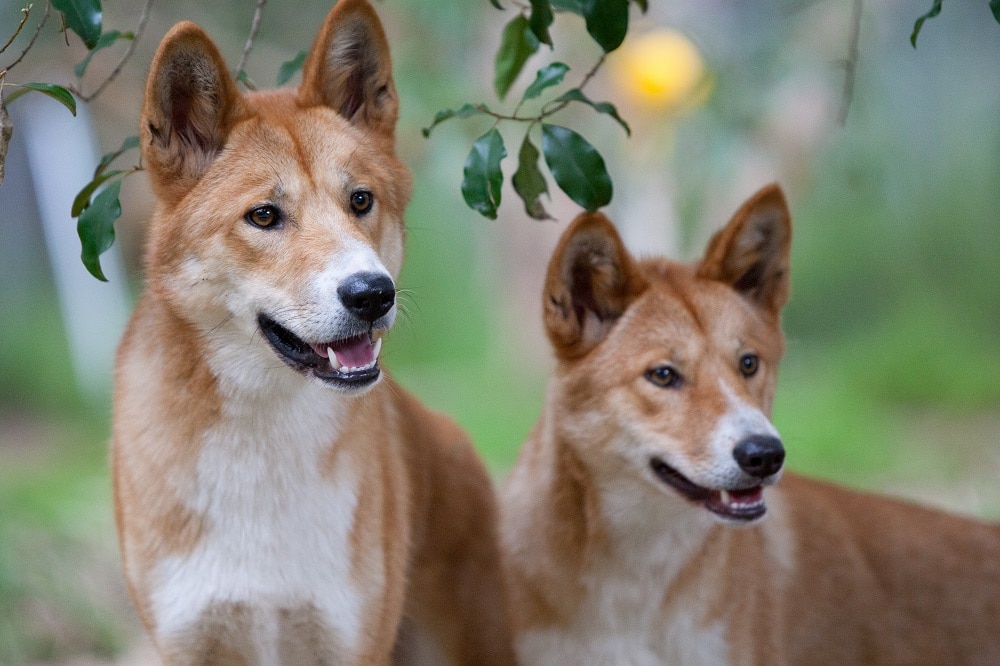 Dingoes are listed as a vulnerable species. It is not fully understood how many pure breed dingoes are left in the world as there has been interbreeding with domestic dogs so it’s difficult to gauge.

In national parks, World Heritage areas, reserves and in some states and territories of Australia, dingoes are protected by law. However, some regions consider dingoes a pest so attitudes towards them is mixed.

A big threat to dingoes is loss of their habitat as the landscape develops but they are generally good at adapting to change.

Another threat for dingoes is from humans feeding them. This means dingoes may lose their natural fear of people and this can have repercussions with dingoes expecting food which can lead to dangerous behaviour around people.

There have been cases where dingoes have had to be euthanised due to biting people at campsites while looking for food sources.

Dingoes in the wild

Unfortunately, dingoes are thought to be to blame for the decline, and even extinction, of some Australian native species. It is thought that wild dogs might be responsible for the mainland extinction of the Tasmanian tiger as well as the decline in a range of mammal, bird and reptile species. Dingoes also pose an ongoing threat to farm animals and domestic pets.

However, wild dingoes also keep down the numbers of rabbits, feral pigs and other pests so it’s a fine balance. Dingoes are an integral part of our ecosystem in Australia.

Dingoes are wild animals and. like many wild animals. they have the potential to be dangerous.  However, instances of attacks on humans are rare.

There are some things you should do to stay safe in an environment where dingoes live.

Remember: Dingoes are wild dogs. If you’re going camping somewhere that dingoes live, it’s you who is in their environment. They will be inquisitive and they could be lured by the thought of some easy food scraps. Be sensible, take some precautions and listen to local advice.

If you are wanting more facts for kids about dingos, why not visit your local wildlife venue or zoo to find out more. You can even meet a dingo up close at Australia Zoo as they’re taken on their daily walk around the grounds so this is a great opportunity to meet the keepers and ask some questions about dingoes.

I hope you enjoyed these fun dingo facts for kids!

If you found this post about facts for kids about dingoes useful, please give it a share.

If you enjoyed these dingo facts then you’re going to love our other facts for kids posts. Check some of them out below!