Home » How your child’s violent video game affects my family

How your child’s violent video game affects my family 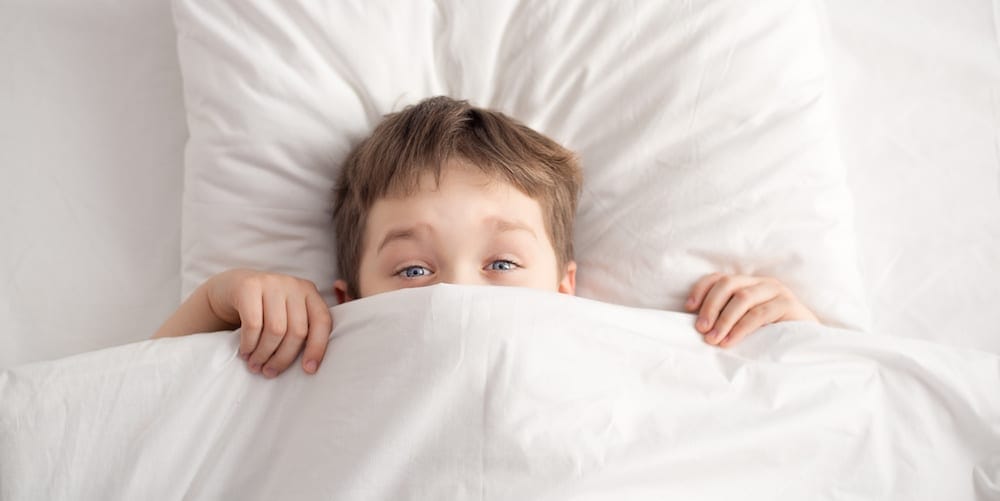 I’m writing this article through the bleary eyes of a mum functioning on very little sleep. The reason? My seven-year-old son is too terrified to go to bed lest he be ‘mutilated’ in his sleep.

We’re on about day six now. That’s five nights of little-to-no sleep thanks to the images in his little head put there by violent video games that he has never even seen. That’s right, we don’t have any First Person Shooter (FPS) games like Grand Theft Auto (GTA) and Call of Duty (CoD) here. There’s no survival horror video games like Five Nights at Freddy’s either. He’s never even seen them at any house he’s visited, the kid still plays Minecraft in safe mode for crying out loud.

No, it’s not even the actual games, but the conversations in the schoolyard simply describing what happens in those games that is enough to have him scared out of his wits.

Ah, the joys of raising a sensitive soul.

I don’t expect the world to cotton wool him

It’s not an easy task, raising a child who takes so much on board. Oh there’s plenty to love – don’t get me wrong – sensitive kids are pretty special. They think deeply, they are kind, sweet, empathetic and caring, and of course they’re are hilarious and fun like all kids. But the flip-side to all of the sensitivity can be the over-abundance of emotion and anxiety about the world that needs to be navigated.

It’s exhausting, for them and for those of us raising them.

It’s a fine-line between wanting to protect them from all of that worry and wanting them to learn resilience. You can’t really have both.

Oh sometimes it would be easier to keep them out of situations that make them upset; “Worried about that dog? OK, we just won’t go to that house,” but it seldom does them any good.

It’s my job as a parent to ensure that this sensitive soul gets through life hanging on to all of the good bits that come from his emotional side, without having the bad bits cripple him, preventing him from trying new things and living his life to the fullest.

When he’s scared, I need to give him the tools to overcome that, for him and for the rest of us who also need sleep! *yawns* Because, quite simply, scary stuff is out there in the world.

As parents the control over what our children are exposed to is pretty limited. It would be naive to imagine that every person they come in contact with will have the same set of boundaries that we do.

Life’s not all ABC for Kids all the time. They’re going to hear ghost stories, trust me. Just a few months ago my husband and I stood in front of our bathroom mirror holding hands while our five-year-old daughter peeped around the door. There we stood, solemnly chanting the name ‘Bloody Mary’ three times to prove to our frightened daughter that doing so would not cause a blood covered maniac to burst through the glass while she was brushing her teeth. Fun times.

And for that reason I’m a firm believer that our time is better spent getting them prepared for what they might see and giving them the tools to deal with it, rather than trying to puppet-string their entire life so that they’re only seeing what we are comfortable with.

But that doesn’t mean that I’m OK with your child coming to school and talking about the sex, drugs, and other violent criminal behaviour they’ve been learning about while playing FPS games that are designed and rated for a much older audience, with my stage one, seven-year-old child.

The pros and cons of children playing video games at all is often quite hotly debated amongst experts, but in general the consensus is that with moderation and monitoring there are benefits to consider eg: they aid in the development of fine motor and spatial skills and encourage problem solving and logic.

However, even those staunchly pro-game will concede that the ratings on the games are important. FPS games contain content that young brains are simply not wired to process adequately.

Even if my son wasn’t a sensitive soul, I would still not be letting him near games like those. The overabundance of racist, sexist, and verbal abuse dished out in the multi-player versions of these games is legendary. Ask any parent of a teenager who thought that a wharfie had moved into their rumpus room.

Sure, let your child play them if you think it’s OK but, please, make sure you also let them know that not everyone thinks it’s appropriate for young kids to be decapitating pimps, and not every seven-year-old is equipped to deal with the violence and gore that comes along with that. If you’ve allowed it in your home, please – I’m begging you – try really hard to ensure that it stays within your home.

While it’s my job to teach my child resilience to deal with the things that scare him, it’s also my job to teach him awareness and observation of those around him, and that would include not trying to scare the crap out of his friends.

I know kids talk and push boundaries but couldn’t those boundaries be a little less, I dunno- adult? Even for just a bit longer?

Empathy really is just as important as resilience. Speaking of which …

My favourite child psych, Dr Sasha Lynn is all about resilience – it’s her jam. She’s passionate about it from a professional standpoint, and as a mum to a sensitive little button herself, so I often pick her brain on how to ride that particular parenting bus.

On building resilience in ourselves and in our kids, she writes:

• Get support when you need it: For kids- encourage them to talk through their concerns. i.e. “Mum I have some concerns about breathing adequately and seeing where the hell I’m going in this lame sheet that you’re calling a ghost costume”• Develop resilient self-talk: “I can get through this” “It won’t last forever” “this is how I learn” “My Mum is totes lazy but this crap costume is better than nothing”

• Problem-solve another way to get past the issue: i.e.- “if I hold the sheet close enough I can actually see through it and make my way nimbly around the house and yard”

• Try not to hold onto failures: We all muck up from time to time. It’s going happen. Rather than get all pity partyesque, give yourself a small window of time to get a bit ‘dang it’ and then move on. Like in the case of my little ladies “Well this blows. We’re no cute witches. Buuuut, we’ll just run out the sads and crash into each other a few times. Makes eeeeverything better”. The more we hold onto things we can’t change, the worse things get. And it just sounds a bit ridic when we think of it like that, doesn’t it? Why hold onto something we can’t remove/change?

• Try to see the funny side: Sometimes we just gotta lighten up where we can. Miss DP is a delicate flower (read: extremely melodramatic drama queen), and can get a tad upset (or scream the house down) over literally nothing. When we can joke with her, and she can see the funny side to stuff, she calms down a heck of a lot quicker.

Whether your child is the scarer or the scaree, I think it’s important that we all do our part to make sure that everyone’s kids get through this growing up gig relatively unscathed. Would you agree?

Digital Detox | 10 Easy Ways to Get Your Kids Off Screens
REVIEW: Tube Superstar from Zuru Toys Helps Kids Vlog Like Pros!
The Best Places to go Bowling in Brisbane with Kids
How to Raise a Giver in a Gimme World | Practicing Gratitude
Tweet
Pin1
Share26
27 Shares