Home » Fun Echidna Facts for Kids: Learn All About Echidnas

Fun Echidna Facts for Kids: Learn All About Echidnas 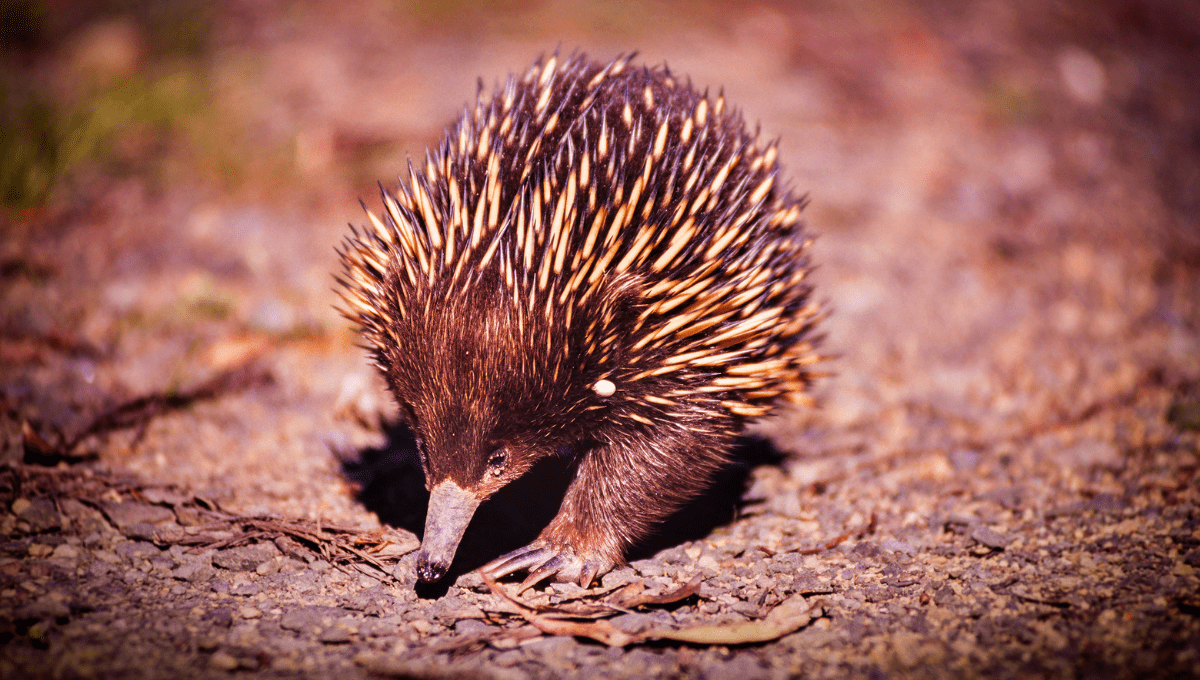 Do you want to learn all about echidnas? Echidnas are a peculiar spiky mammal that can be found living in a range of habitats across Australia and New Guinea. Read on to discover these fascinating echidna facts for kids, learn all about an echidna’s spikes, habitat, eating habits and the threats an echidna faces.

Facts about echidnas: What is an echidna?

We’re so lucky that echidnas are native to Australia, although these shy waddling, spiny creatures aren’t often sighted.

Australia’s most common native mammal is covered with strong, sharp spines similar to that of a hedgehog or porcupine. They have small, beady eyes and a long, bald snout which is sometimes called a beak.

An echidna can range in size from 14 – 52cm, and although they look similar to porcupines, hedgehogs and anteaters, they have a lot more in common with the Australian platypus.

An echidna’s appearance depends on where they live. Echidnas living in hotter regions are a lighter brown colour, and those living in cooler locations are darker in colour so they can blend into their surroundings unnoticed. Their spikes help echidnas blend into the bush seamlessly and they also offer protection from predators.

There are four species of echidna in the world.

The short-beaked echidna can be found across Australia and in lowland New Guinea.

What is the scientific name of an echidna?

The scientific name for short-beaked echidna is Tachyglossus aculeatus.

The scientific names for long-beaked echidnas are:

Yes, amazingly echidnas can swim. Their snouts act a little like snorkels so they can breathe as they cross rivers. They are actually strong swimmers and they can often be found in streams.

What do echidnas eat? 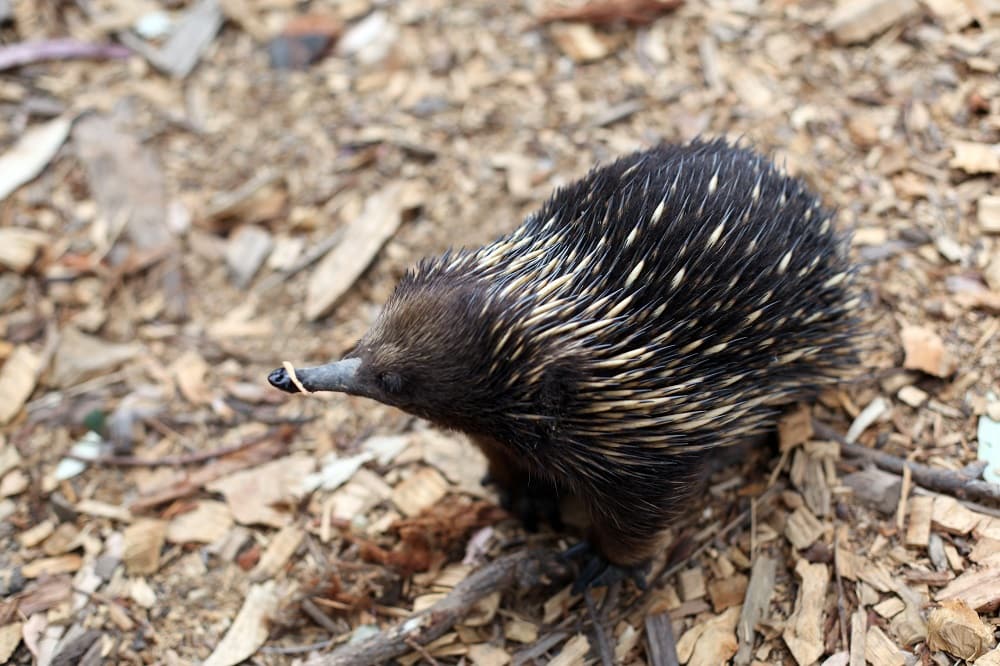 An echidna can only open its tiny mouth enough to allow its long, sticky tongue to protrude, but its tongue is covered with backwards-facing barbs that catch worms and insects like hooks and pull them into their mouth.

Echidnas don’t actually have teeth but their unique tongue helps them to eat. They use it and the pads on the roof of their mouth to break their food down so they can swallow it.

An echidna’s strong sense of smell and hearing helps them hunt for their food.

Echidnas mostly live solitary lives, until a female is ready to breed. When the time comes, she will find herself being followed by groups of male echidnas vying for her attention. She gets to choose which one she likes best (the one that followers her the longest and closest!).

Almost a month after mating, a female echidna lays a tiny egg which is kept safe and warm in her pouch. Around ten days later, the egg (which is the size of a grape) hatches!

A baby echidna is called a puggle. Puggles live in the mum’s pouch for the first two or three months so they can stay safe and suckle milk from milk patches – these are fine pores that secrete milk.

At around two or three months old, when the puggle is growing spikey spines, they’re able to leave the pouch and the mum will go off foraging for food for a few days at a time leaving them alone in the burrow.

Eventually, when the puggle is six or seven months old, the mum will feed her baby one last time. She then leaves the burrow open, never to return or have further contact with her offspring.

Want to know about echidna habitats?

The habitat of an echidna is open heathland, woodlands, forests or scrublands – they love living amongst vegetation or in hollow logs. Echidnas are able to burrow down and dig to create safe places to rest.

When reproducing, female echidnas construct a nursery burrow which is a large tunnel-type area to keep her baby safe.

Why do echidnas have spikes? 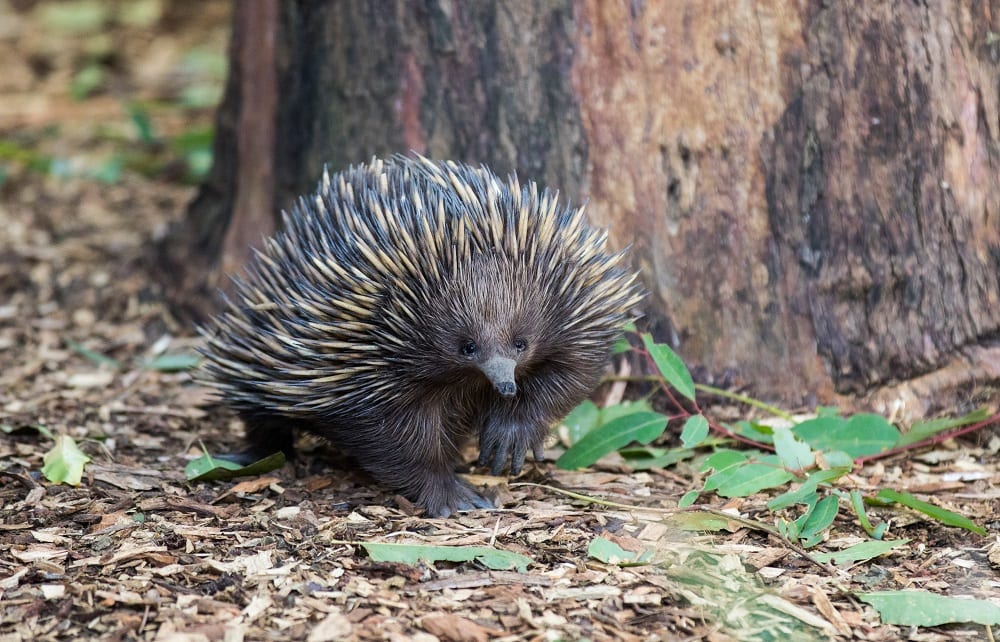 An echidnas spikes protect them from predators such as dingoes and goannas. Their spikes also provide excellent camouflage in the bush.

If threatened, an echidna will curl up into a ball and, if possible, lodge itself into a log, crevice or rock. It may use its claws to dig itself into the ground a little so only the spikes are exposed. A predator won’t have a chance against those spikes!

Here are some quick-fire echidna facts for kids:

What are the greatest threats to echidnas?

As our world develops, the echidna’s habitat depletes. More buildings, homes, shops, offices and buildings mean fewer forests, bushland and grassy areas for echidnas to live. Busy roads and traffic also pose a risk as echidnas are slow-moving creatures so they can find themselves in dangerous situations by the roadside.

Our dogs and cats can also pose a risk, especially to the young puggles hiding in burrows. Feral dogs and foxes are another threat.

In Australia, bushfires and drought can damage habitats and endanger echidna’s lives so climate change will continue to have an impact on the future of echidnas in Australia.

In New Guinea, these unique creatures are hunted so this is a major threat to echidna numbers there.

There are a number of organisations that rescue Australia’s wildlife by caring for sick, orphaned and injured native animals. If you’re over 18, you can become a volunteer rescuer and carer for some of them. You can fundraise, or donate to these organisations so they can continue doing their important work. You can help with echidna research by submitting photos to this Echidna CSI app if you see an echidna! And you can keep an eye out for echidnas in need and make sure you call for help if you see one in trouble.

Taking care of the environment is important, so recycle, don’t drop litter and be aware of climate change issues.

Fun facts about echidnas for kids

Echidnas are one of the earth’s oldest surviving species yet there are still so many fascinating echidna facts to learn about them.

I hope you enjoyed this post about interesting facts about the echidna!

If you have enjoyed this echidna facts for kids article,  and you are looking for more great facts for kids to help with projects, check out our articles: