Dolphin Facts for Kids to Help You with a School Project

Looking for fun dolphin facts for kids for a school project or just because you love dolphins and love learning facts about animals? We’ve got you covered in this article as it’s packed with useful information about dolphins.

Facts about dolphins for kids

Dolphins are known as the brainiacs of the oceans. They are super smart and have highly developed brains that have developed over thousands of generations.

Did you know that the scientific name for dolphins (or ‘toothed whales’ as they are also known) is Delphinidae? This comes from the Latin word ‘Delphinus’ which means ‘dolphin’.

Dolphins live in temperate and tropical waters around the globe, including our own coastal water of Australia. These remarkable creatures are very intelligent and playful and they’re a joy to watch. Have you ever been on a boat trip and seen dolphins playing in the waves and showing off?

Let’s answer some of your questions all about dolphins…

Are dolphins fish and how do dolphins breathe? 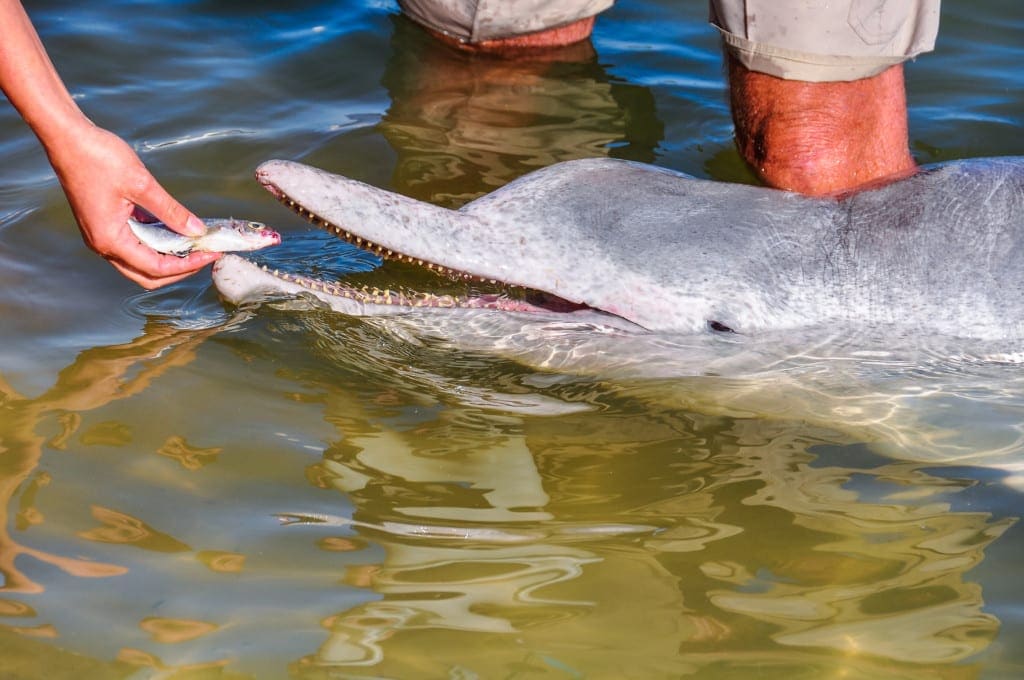 No, dolphins are marine mammals, not fish.

Dolphins are warm-blooded and they breathe through their lungs. This means they need to surface to take a breath, unlike fish which breathe underwater through their gills.

Dolphins are very clever though and they’re able to adjust their bodily functions to extend their time under water. If they need to be without breath for longer, they’re able to shut off or slow down their digestive system, heart rate, and even their blood flow to give them more time underwater.

Us humans breathe automatically without even thinking and we have to continue breathing all the time. Dolphins have a lot more control over how often they breathe so they can consider their surroundings and choose how often to surface.

While we take our breaths through our nose and mouth, dolphins only breathe through their blowhole – this is a hole on the top of their head. This hole opens to allow them to take in oxygen, and then it closes again tightly to stop water from getting in. This means a dolphin’s mouth is used purely for eating. The reason for this is so a dolphin won’t accidentally suck water into their lungs while eating so it keeps them safe from drowning.

How do dolphins communicate with one another?

Dolphins communicate with one another by making a squeaking, whistling, buzzing and clicking sound and every dolphin sounds unique. Their sounds can be heard by their species from miles away, so it’s a great communication tool.

How do dolphins navigate? 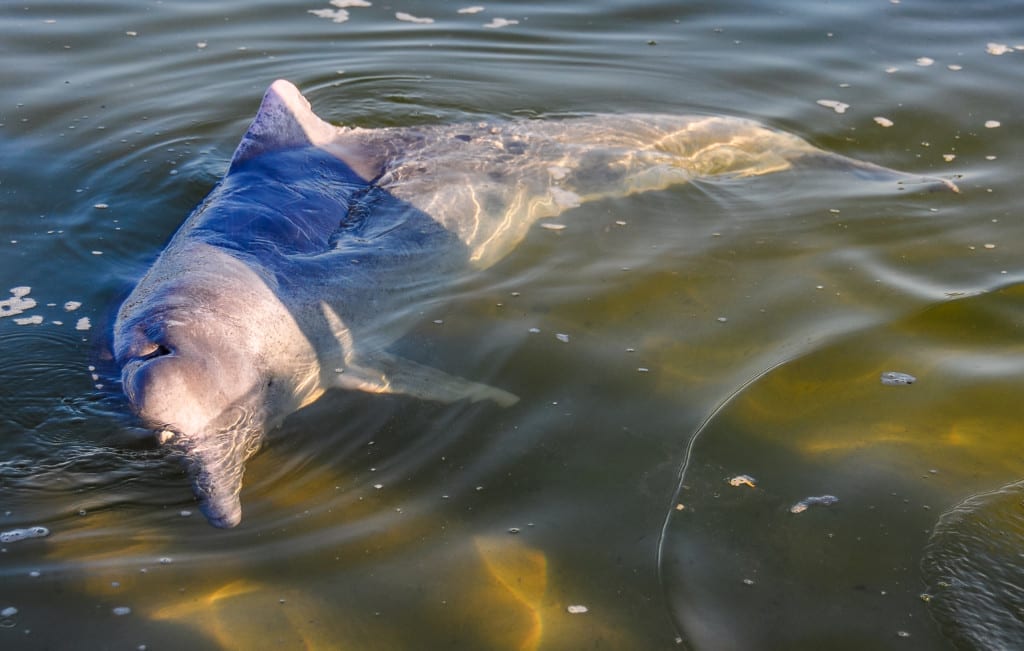 The sounds dolphins make also help them navigate and understand their surroundings. This is known as ‘echolocation’ which means ‘seeing with sound’. The soundwaves from their clicks hit the object and bounce back. This allows them to determine how close the object is, how big it is and even what it’s made of. It’s very clever! While dolphins do have eyes, water can be murky making it difficult to see so this unique ability helps them find their way around the ocean, hunt their prey and avoid danger.

Dolphins also use their bodies and fins to splash the surface of the water as a way of communicating. They use these splashes in lots of ways to communicate with the dolphins in their immediate surroundings.

Do dolphins live in groups? 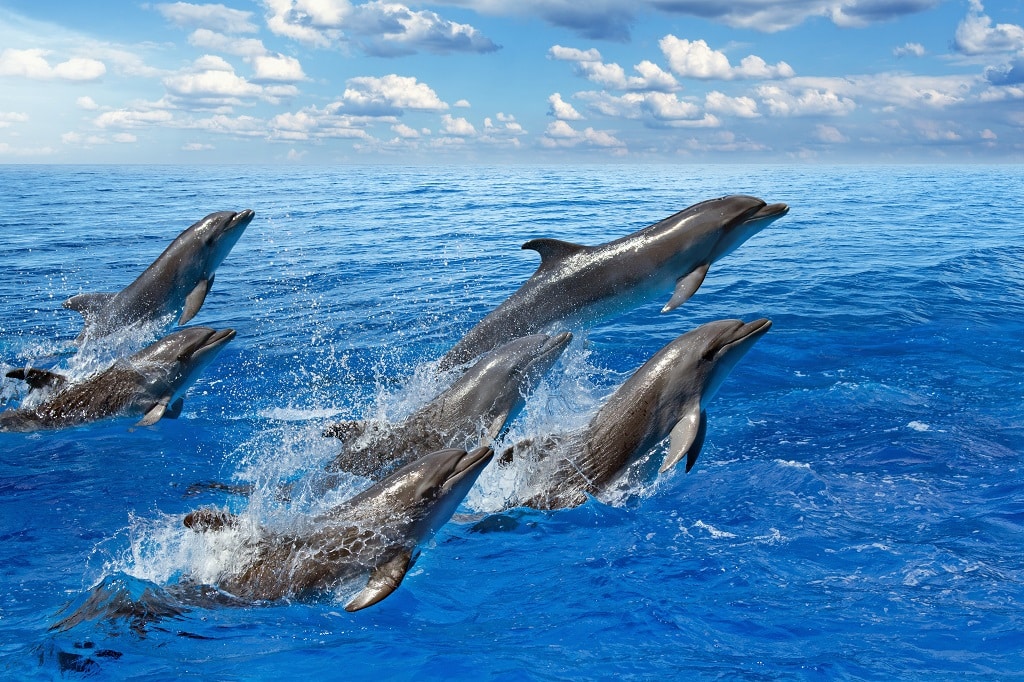 Dolphins live in groups which are called pods. Living in groups like this gives them protection, plus dolphins are social creatures and they like company so they enjoy playing together.

Living in a group allows them to hunt together as a team and their pod helps to keep them safe from predators such as sharks.

Some dolphins stay in the same area for their whole lives while others migrate to different places.

Do dolphins have teeth?

Yes, dolphins do have teeth. Dolphin teeth last them a lifetime – they only get one set! Dolphins use their teeth to catch their prey but don’t actually chew with them as they swallow their food whole.

If you’re wondering does a dolphin have hair? The answer is yes, dolphins have hair or a few whiskers when they’re born although this falls out soon after birth. Some river species do retain some whiskers into adulthood though as it can help them search for prey on the river bed as the water can be murky and the hairs (along with their clicks) can help them find food.

How do dolphins sleep?

Dolphins go to sleep by resting quietly on the surface of the water either horizontally or vertically, and they can also doze while slowly swimming alongside other dolphins.

Let’s dive right into these fascinating and fun dolphin facts for kids:

What threats do dolphins face? 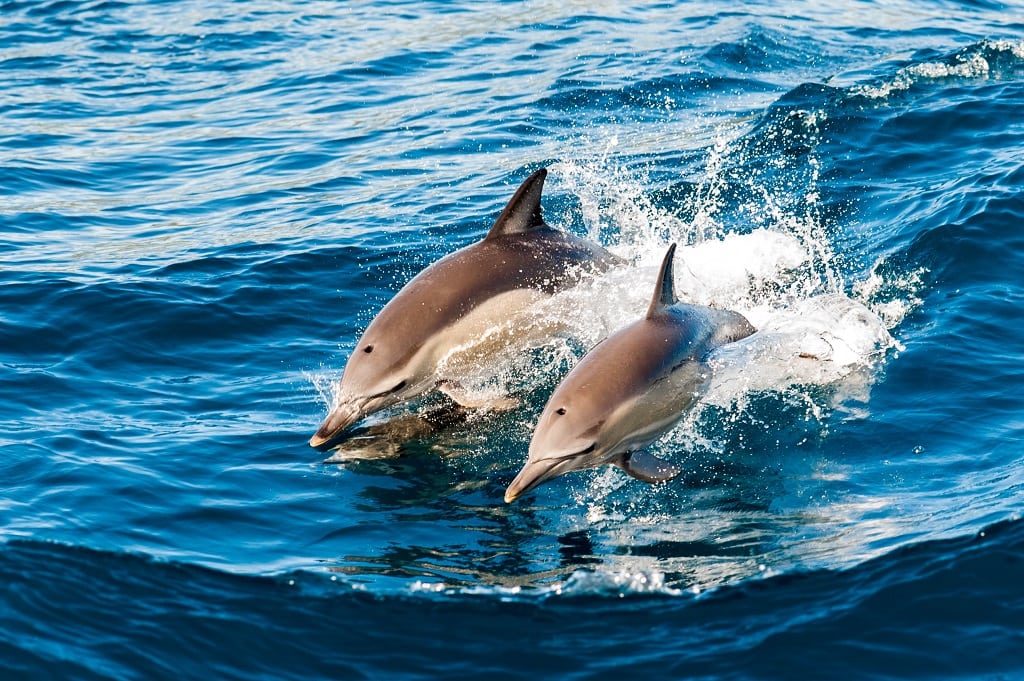 While dolphins don’t have many natural predators they, unfortunately, face many threats from humans.

Dozens of species of dolphin are endangered.

Here are some of the main threats dolphins face:

We can have an impact on the future of dolphins in the world by:

I hope you enjoyed these fun dolphin facts for kids!

If you found this post about facts for kids about dolphins useful, please give it a share.

If you have enjoyed these kids’ facts about dolphins  and you are looking for more great facts for kids to help with projects, check out our articles: