Crocodile Facts for Kids: Fun and Interesting Facts About Crocodiles 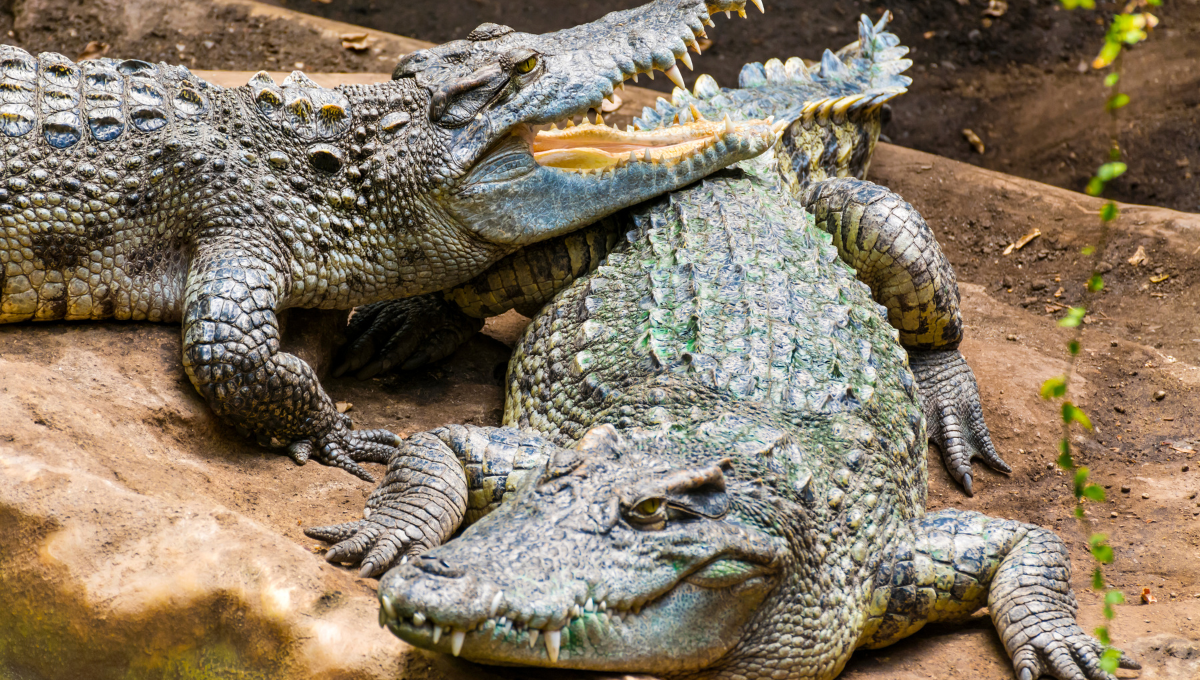 Looking for some great facts about crocodiles? We love sharing fun facts for kids that can help you with your school presentation or project, or even just for fun because you love wildlife.

Do you love crocodiles? Check out these incredible crocodile facts for kids below!

Crocodiles: Facts for kids (and their parents!)

Crocodiles have long been a favourite animal for kids. These large, scaly reptiles are the leading characters in the hilarious Roald Dahl’s The Enormous Crocodile and the classic Never Smile at a Crocodile by Jack Lawrence and Frank Churchill and illustrated beautifully by Shane Devries.

Crocodiles may appear as fun characters in fiction but in real life, these fascinating, mostly-nocturnal carnivores can be deadly!

Did you know that crocodiles (or Crocodylus to use their scientific name) have prehistoric roots?

Crocodiles are the last living representative of crocodylomorphs, a group that dates back over 205 million years! These creatures date back to the Early Triassic period. Can you believe they actually shared the land with dinosaurs?! Crocodiles went on to evolve around 95 million years ago, in the Late Cretaceous period.

Today, crocs can commonly be found in Australia, Asia and Africa.

There are 13 different crocodile species and they come in a range of different sizes, with the smallest dwarf crocodile rarely growing bigger than 2ms in length.

At the opposite end of the scale, saltwater crocs are the largest species of crocodile, and the largest living reptile on the planet – saltwater males can grow up to an awesome 6 metres in length!

Facts about crocodiles: What is a crocodile?

A crocodile is a large reptile with a long snout, a wide mouth and sharp teeth.

A crocodile’s skin is covered with thick, scaly plates that act like armour for a crocodile. This gives them excellent protection from predators and from other crocodiles.

Crocs have eyes and nostrils on the tops of their heads which means they can lay on the top of the water and lay in wait to ambush their prey. This is why it’s helpful for them to live in murky water so their body is hidden as they silently hunt for their food.

Crocodile diet: What do crocodiles eat? 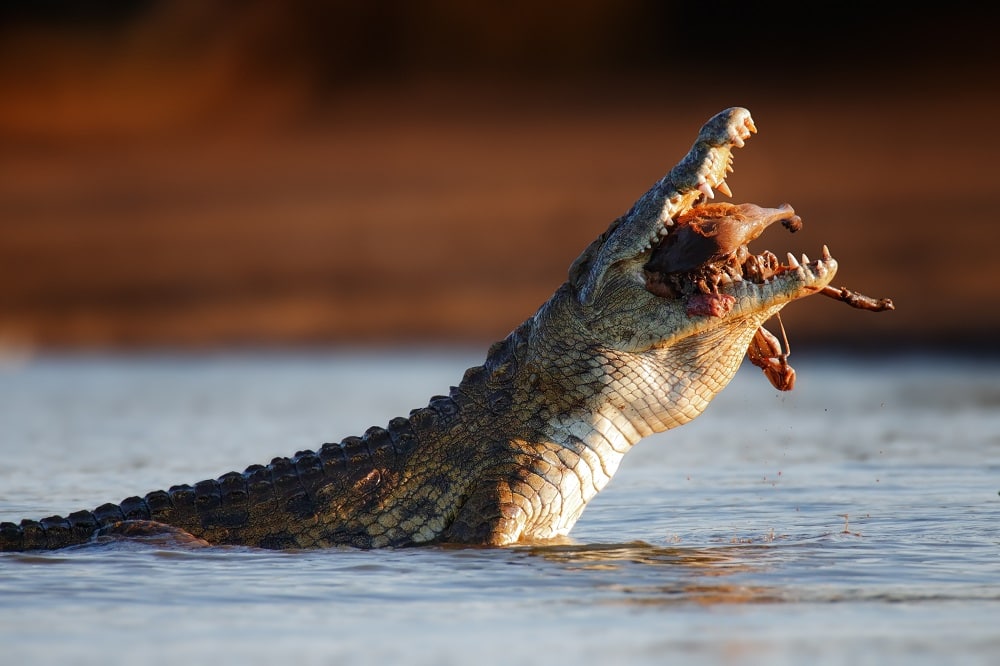 A crocodile is a carnivore. Crocodiles eat fish and anything they can overpower which might be cattle, lizards, snakes or birds. For this reason, it’s important to take care when you’re in an area that is known to have crocodiles living there!

Crocodiles can survive a long time without eating. They appear to be able to shut down some of their systems to conserve energy. This is one of the skills that has helped them survive through such a long period in history as they aren’t as reliant on food as some other animals.

How long do crocodiles live: What is the average crocodile lifespan?

The lifespan of a crocodile varies across species. Crocodiles can live from around 25 years up to 70 years. In captivity, crocodiles have even been known to have lived for up to 100 years!

What about a crocodile’s teeth? 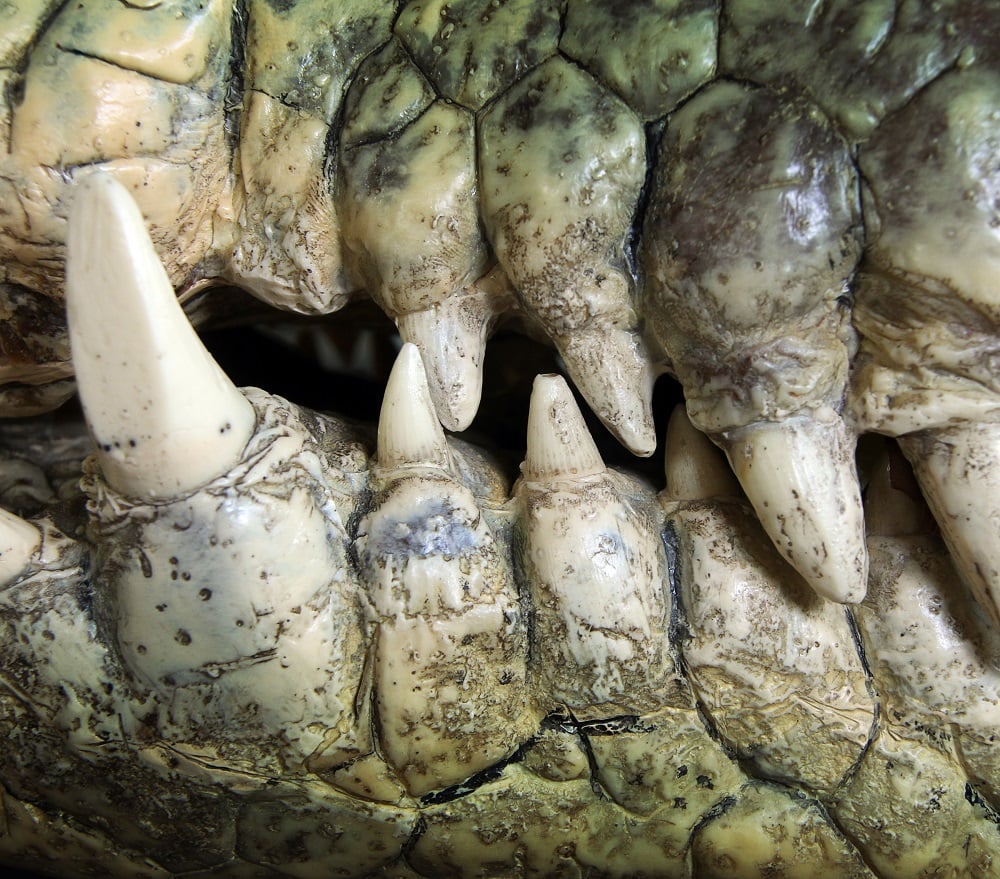 A crocodile has an extremely powerful jaw that has a very, very strong bite (ten times more powerful than a great white shark so this is not something you want to experience!).

Crocs have around 60 teeth, but their teeth regularly drop out. Luckily for them, new ones grow in their place meaning during their lifetime they might end up having a few thousand teeth! If only they could use a toothbrush…

How do you tell the difference between a crocodile and an alligator?

There are a few ways to tell a crocodile and alligator apart. This is really by size, jaw and snout shape, and colour.

Alligators are smaller in size than most crocs. They’re also darker in colour (dark green or black). The mouth is another tell-tale sign.  When their mouths are closed, you can see the visible teeth of the crocodile whereas when the mouth of an alligator is closed, its teeth will be hidden from sight. Alligators also have a different shaped snout – they’re wider and less pointy – crocs have more of a V shaped snout.

How do crocodiles swim?

Crocodiles are strong swimmers and they use their powerful tails and strong core to propel them in the water. Their short legs and webbed feet aren’t much use for paddling but they do play a role in keeping them afloat and stable on the water.

Crocodiles can’t breathe underwater but they can hold their breath for a long time while searching for prey. A crocodile can hold its breath for more than 60 minutes!

Generally, crocodiles can be found laying beside water or floating on the water’s surface so they can keep their nostrils above the waterline.

Crocodile senses: Can a crocodile hear and see?

You might not think it, but crocodiles have excellent hearing and a great sense of smell. They also have exceptional night vision which definitely puts them in charge when the sun goes down. Crocs are known to sometimes sleep with one eye open which is a pretty clever trick.

Crocodile mating rituals and how are crocodile babies born? 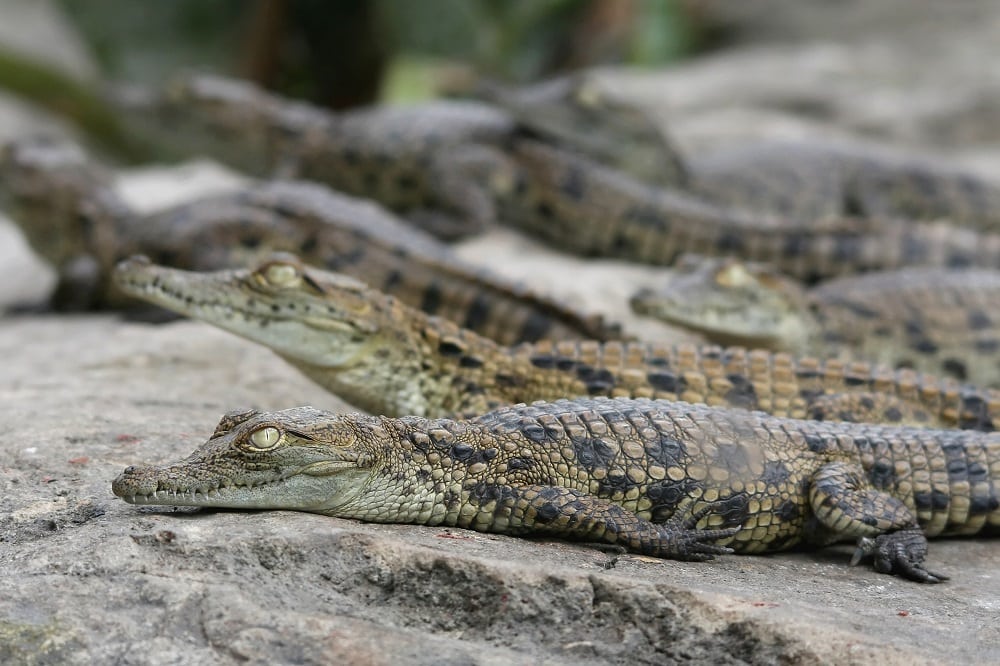 Then it’s up to the male croc to show off to get a female crocodile interested in him.

As the time to lay the eggs approaches, female crocs create a large nest to protect the crocodile eggs – this is made up of sticks, grass and leaves. The purpose of this crocodile nest is to protect the eggs from changes in temperature, from predators and from environmental problems such as floods.

A female croc will lay around 50 eggs in the nest. She will then cover them for added protection before going back to the water and leaving them alone. Although, she doesn’t stray too far and will do whatever it takes to protect her nest.

It can take up to around 80 days for the eggs to incubate. As the eggs approach the time to hatch, the hatchlings begin making squeaking sounds to alert the mother of their imminent arrival. Slowly, the baby crocodiles begin to emerge from their shells and enter the world.

The mother crocodile helps them get out of the nest and enter the water safely and they stay by her side for protection for several months as they grow and navigate the new world around them. They even climb on her back for safety in the water.

Can a crocodile run fast?

Crocs are fast and strong predators underwater. You might not realise, but they can travel fast on land too. As crocs have short legs, you’d think they would be slow runners but they can move fast with the right incentive (which is usually hunting their prey, or from fear).

While crocodiles can run fast when they want to, the initial burst of speed is in their lurch as they accelerate. They quickly lose speed after that fast burst of movement. However, if you happen to be standing near to a crocodile, this means you’d need to be prepared to move very quickly!

You don’t usually see a crocodile running around on land though. Crocs mainly spend their time on land basking in the sun lazily or moving at a slow pace.

How big is a saltwater crocodile?

The saltwater croc is the largest living reptile on the planet. Male salties can grow up to 6m in length and females up to about 3.1m.

Where do crocodiles live?

The crocodile habitat is wetland areas. Murky rivers, marshes, swamps, lakes, estuaries and lagoons are the perfect home for a crocodile. Saltwater crocodiles live in salt water areas, hence the name. They can use the ocean currents to travel long distances. Tagged saltwater crocs in Australia have been monitored travelling distances of 590km! Travelling by ocean current is a very low-maintenance way to travel as the water does all of the hard work for them and they just go with the flow.

How do crocodiles stay cool?

Crocs stay cool by keeping their mouths open. Crocodiles don’t sweat or pant like other animals, so this is a way of them releasing heat from their bodies.

What colour are crocodiles?

Crocodiles are usually a dark brown/green colour – this helps them to blend into their natural environment. It’s very difficult to spot a crocodile in a murky river!

What are the threats to crocodiles?

Crocodiles are high up in the food chain as they’re pretty fearsome, dangerous-looking creatures but they do have some predators depending on where they live in the world. In some countries, big cats like leopards can pose a threat. In Queensland, the toxic cane toad can be life-threatening to them. Up in the Northern Territory, research has shown that cane toads have more than halved the number of freshwater crocodiles in some waterways in the region. This has dangerous consequences for the ecosystem. As soon as a croc bites a cane toad or has it in its mouth, the toxic glands on the cane toad is enough to kill them.

Another threat to some crocodile species around the world is hunting. Crocodiles are hunted for their skins. Crocodile skins are used for bags and shoes, and this has meant some species have been hunted to almost extinction levels.

Every year, thousands of crocodiles are farmed and killed in Australia – mainly in Northern Territory and North Queensland. Their skins are turned into luxury handbags, wallets and belts, and their flesh is used for meat.  Crocodile meat is considered a healthy food as it is lean meat that is low in fat.

Crocodiles living in crocodile farms lead a more limited life with restrictions – it’s important for the farmers to protect the crocodiles from one another so they can’t have fights over territories as they would in the wild. This is to protect their skins from damage caused by fighting, as scarred skin wouldn’t be as valuable.

How to stay safe around crocodiles

Remember that it is important to be ‘croc-wise’ when you’re visiting an area where crocodiles are known to live. If you’re going into a crocodile’s habitat you need to be smart and take precautions.

Crocodiles aren’t there to hurt us – we are coming into their habitat so we need to respect them.

If you are wanting more facts for kids about crocodiles, why not visit your local wildlife venue or zoo to find out more. You can even watch the crocodile show at Australia Zoo which is a fantastic way to see crocodiles and learn all about them.

I hope you enjoyed these fun crocodile facts for kids!

If you found this post about facts for kids about dingoes useful, please give it a share.