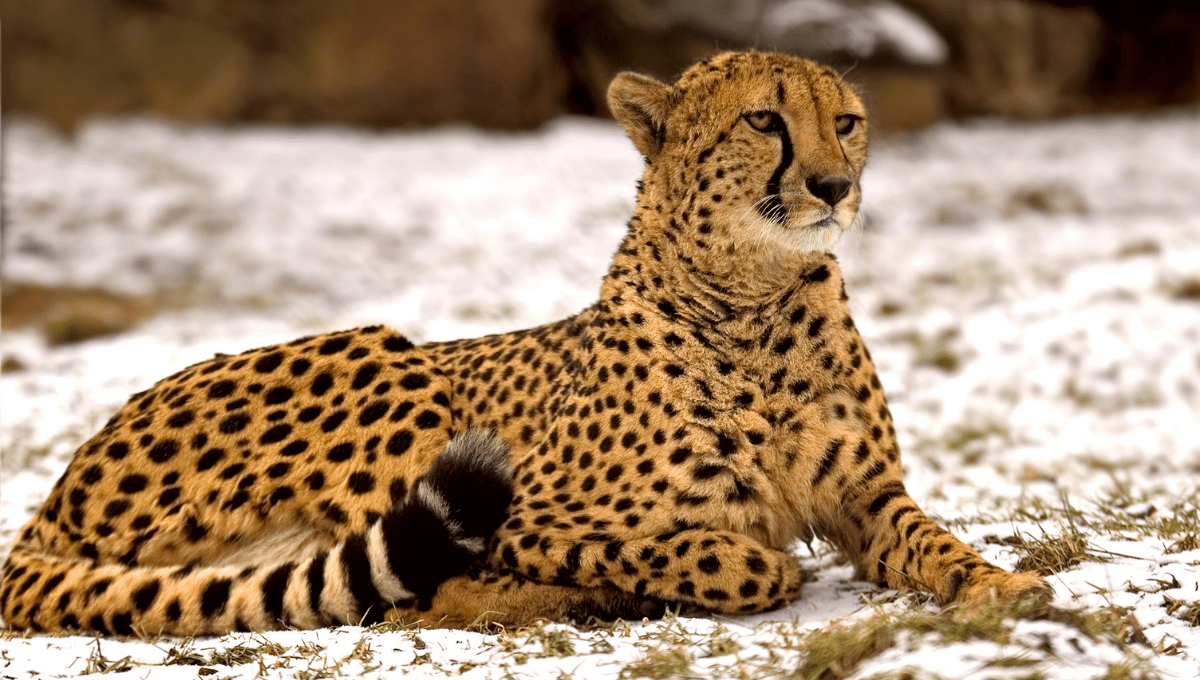 Looking for interesting facts about Cheetah for kids? These magnificent creatures may look like giant cuddly cats, but how do they live and survive? Where can you find them?  What do they do?

We have compiled a great list of interesting facts about cheetah for kids! What do we really know about them and why do they act the way that they do?  What are some of their characteristics? Read on for some cool facts about cheetahs. 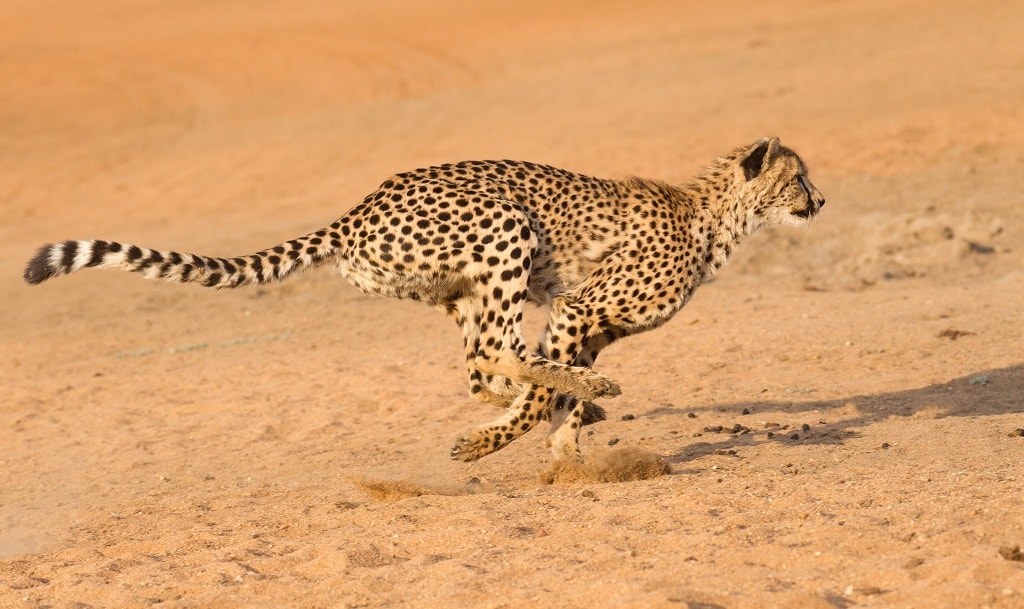 Some fun facts about cheetahs for kids:

Cats! These beautifully stunning, large cat species have an amazing coat of black spots on a background of orange fur.  They are slender in build which helps them gain extraordinary speeds when chasing their prey.  These cats are usually found in parts of Africa and Asia (although in some countries they are now recorded as ‘extinct’).  The male is typically larger than the female and stand, on average, 30 inches tall.  Their striking coat helps them to camouflage (hide) in the background, useful when trying to find their food!

Often confused with leopards in appearance; one distinction is the spots on the coat (black spots on cheetahs and rosette-style spots on leopards). Cheetahs also have black tear streaks on each side of their face. Leopards take their hunted prey up into a tree (cheetahs will not).

Cheetahs are meat-eaters (also known as carnivores).  They usually go hunting for their food through the early or late parts of the day (not night time hunters). Often, they are found up a tree scanning for their next meal. In the African savannah they have choices of meat.  This usually includes gazelles, zebra, rodents, rabbits, birds and antelope.  They will chase after their prey and can reach speeds of over 100kph (but cannot maintain this speed for any length of time). Cheetahs are extremely flexible and their build lends itself to being able to change direction easily and quickly. They will aim for the throat of their prey which will suffocate and kill. 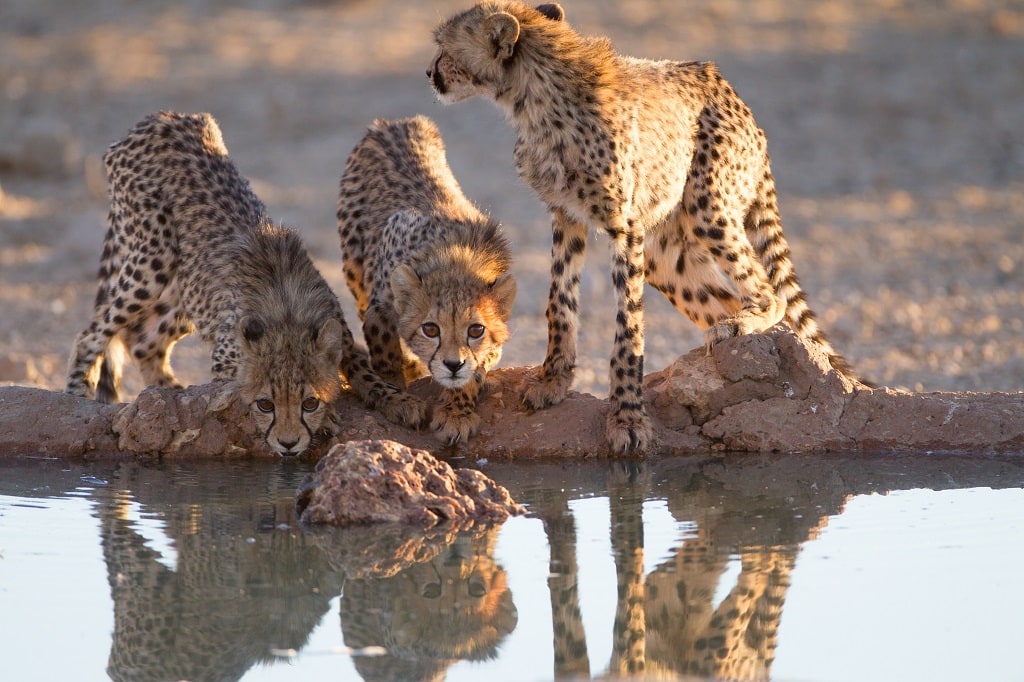 The family unit is different for both males and females.  Males will generally stick with other male siblings (brothers) for life. This gives them the best chance of survival and allows hunting in numbers.  ‘Coalition’ is the name given to a male group.  The coalition is useful when defending themselves against other predators.

Females, on the other hand, are relatively alone once they reach maturity.  They will, however, look after their babies (cubs) for some time.  Mums will teach their cubs how to climb trees, how to hunt for prey and will learn fighting skills by play-fighting with their siblings.

Female cheetahs will start having babies from around two years of age. Cubs will stay with mum until around 18 months of age and will then move on.  Sometimes they will hang out with their siblings while learning the finer points of hunting and, as mentioned, brothers often stick together.

Mums will travel with her cubs in order to find food.  Cubs will join in with the hunt just before they reach their first birthday.

When the cubs are very young and very dependent on mum, it is difficult for her to find food and tend to her offspring.  Predators often kill cubs in these first few months.

The International Union for the Conservation of Nature (IUCN), lists threatened species of animals and plants. This means that they raise the profile of animals that are in danger of becoming extinct (no longer living). Acinonyx jubatus (Cheetah), in recent years, have featured on this list classified as ‘vulnerable’. The Endangered Animals list within the ICUN, has 7 categories ranging from least concern (not currently worried about them) to critical (meaning that there is a real possibility they will become extinct). By raising the profile of a species via their ‘red list’, it provides advice and research to ongoing local projects to help protect the habitat and animal to help them survive.

Cheetahs are ‘vulnerable’ for a number of reasons including:

Habitat loss: Habitat is a word used to describe the area in which a species exist.  Cheetahs are often found in savannahs (grassland areas), where they can use the trees to climb and find prey and shelter in long grass (also good for hiding). These areas are becoming fewer in number mainly due to human activity of clearing areas for materials or building works.

Other predators:  Cheetahs are looking for similar food as other wildlife.  With so many hunting the same type of animal, they often miss out.  Other predators will also hunt for young cheetah cubs when they are at a vulnerable age which will also keep cheetah numbers low.

Hunted: Their stunningly attractive fur has lead to them being hunted for their coats.

In Asia, cheetahs are only found in parts of Iran. They are listed as ‘critically endangered’ in this region and are completely protected.

Most cheetahs are found in African nations, particularly South Africa.  According to the IUCN figures, there are less than 7,000 known cheetahs living in the wild. They can live up to 14-15 years of age.

How can we help cheetahs?

The cheetah fun facts for kids are a great way to learn about these beautiful big cats. It is obvious that they are in need of protection and help if we want them to stay in existence. So, what can we do?  Conservation is a term used to help protect a species or environment. There are many projects in areas where cheetahs can be found, from breeding programmes to monitoring cheetahs’ movements, to better understand the species.

That said, individually you may feel there is nothing we can do to help.  Donations are always an option – these programmes often rely on funding to keep going.  Alternatively, there are ‘adopt’ programmes where you can ‘adopt’ a cheetah (not to come and live with you!) but will often involve a donation and in return you will receive ongoing information about a particular cheetah.  This often tracks them and provides information – a great education tool.

If you have enjoyed these kids facts about cheetahs, why not look up our other FUN FACTS.