Boys and their Dads Flip Out for Circus Fun!

We recently spoke to a local Brisbane Dad who tells us why his boys LOVE the unique difference offered by Flipside Circus at Alderley.

Andrew and Sonya Foley are two very proud parents who, along with their sons Oliver and Angus, have been a main of the Flipside Circus family for 7 years. Oliver was introduced to circus at the age of 5 when he attended one of Flipside’s famous School Holiday Workshops. The family were looking for an activity that could engage Oliver physically, creatively and intellectually and, after 2 years of watching from the side, his younger brother Angus jumped in on the circus action too.

The boys started attending regular classes and as their passion for circus grew, so too did the family’s participation in the Flipside Community. Mum and Dad volunteered at working bees and started helping transport and cooking for performers to and from shows while the boys would attend circus performances as often as possible and even set about teaching their parents how to stretch, acrobalance and juggle!

Through the boys’ experiences at Flipside they have grown in confidence, fitness, strength, body awareness and are able to challenge themselves to do things they haven’t done before like meet new people and overcome their fears. However, the benefits of circus haven’t stopped there! Oliver, for example, had a natural affinity for circus, the movement and creativity really appealed to him, he loved it! Performing however, was a big challenge for him and he was terrified for his first show. He spent 2 days panicking beforehand, not wanting to go on stage. Oliver’s trainer recognised his anxieties but placed no pressure on him to perform and through the support of his family and trainer, Oliver overcame his anxiety and decided to give the performance a go and he loved it! Oliver’s dad Andrew says of his sons’ performing, “It’s brilliant! Just to see them on stage or in the training space, watching them do things I didn’t realise they could do and watching the audiences response to their performance is fantastic, it makes me very proud as a parent.”

Oliver and Angus have had plenty of experience on the stage having had the opportunity to perform in the Sydney Festival, Woodford Folk Festival, Pine Rivers Festival and throughout regional communities in Central Queensland. The boys also have regular contact and mentoring from professional circus performers who also train in the Flipside Circus Training Centre. Seeing their mentors has inspired the boys to teach as well as perform, working as trainer-assistants in schools with marginalised student populations and as buddies in the Flipside Explore the Possibilities Program working with children who have additional needs. 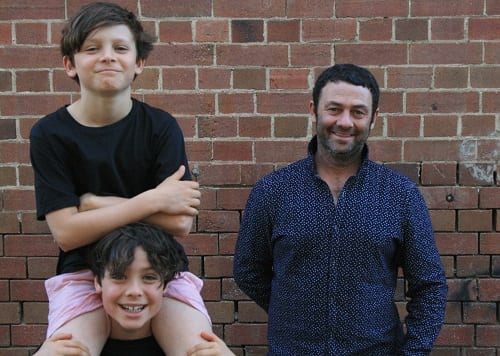 ssons with Master trainers at Flipside which has seen their technical and athletic skills improve dramatically which is reflected in other areas of their lives. Angus has little doubts about what he can and can’t do, taking more risks with confidence, while both boys are seeing the benefits of improved confidence, strength and fitness in their Rugby and Cricket training.

Andrew says when he talks to other parents who are looking for activities for their children, “most think about rugby or soccer but I always say, have a look at circus, it is well worthwhile and provides the kids with all round benefits.”